(Minghui.org) Falun Dafa practitioners held a series of events in front of the Chinese Embassy in Stockholm, near the Chinese Consulate in Gothenburg, and next to the Nobel Museum on April 23 to commemorate the 23rd anniversary of the April 25 peaceful appeal. They told people what Falun Dafa is and how the Chinese Communist Party (CCP) persecutes it. They also called on the world to stop this crime against humanity. 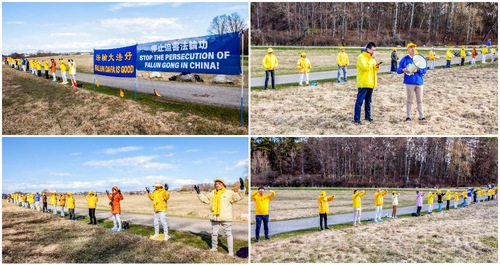 Practitioners held a peaceful protest in front of the Chinese Embassy in Stockholm on April 23.

The quiet and peaceful atmosphere during their event drew the attention of many passersby. Most people that drove by slowed down to read the banners and some accepted materials. Some drivers honked their horns to show their support. Many people took pictures or videos, and young people gestured toward the practitioners to show their support. Some passersby talked with practitioners and asked for more information. 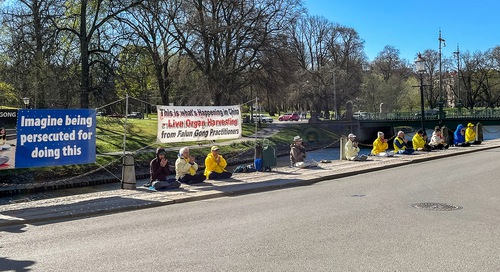 Practitioners peacefully protest near the Chinese Consulate in Gothenburg

Johanna from Gothenburg started practicing Falun Gong in 1999. She said, “Although many people in Sweden know that the CCP is persecuting Falun Gong, people don’t know enough about the true nature of the CCP. We need to keep telling people the truth in-depth.” 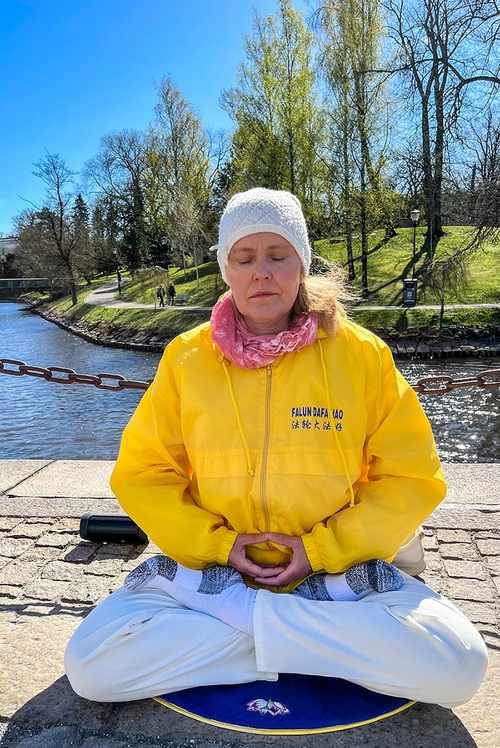 Johanna does the sitting meditation.

Thomas, one of the organizers of this event said that many passersby were very willing to receive information, “They expressed their understanding and support for our peaceful appeal for justice.” 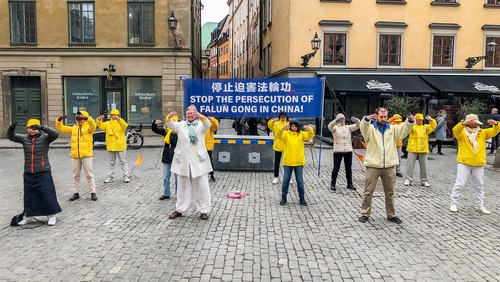 Exercise demonstration beside the Nobel Museum 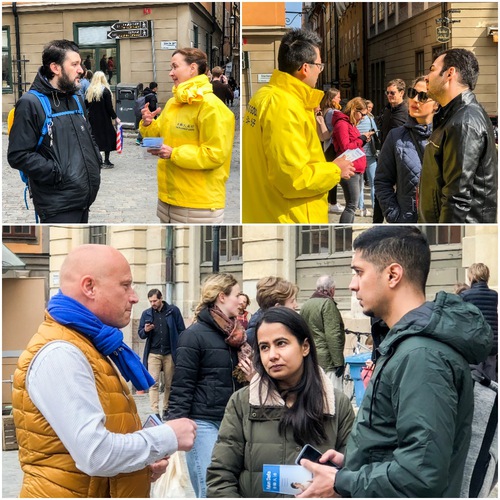 Introducing Falun Gong and exposing the persecution to passersby.

At one o’clock in the afternoon, practitioners went to the Nobel Museum in central Stockholm to do the exercises, display informational boards, and collect signatures. They told local people and tourists about the April 25 peaceful appeal, the CCP’s persecution for nearly 23 years, and how the CCP harvests organs from practitioners for profit. Many people signed the petition to support ending the persecution. 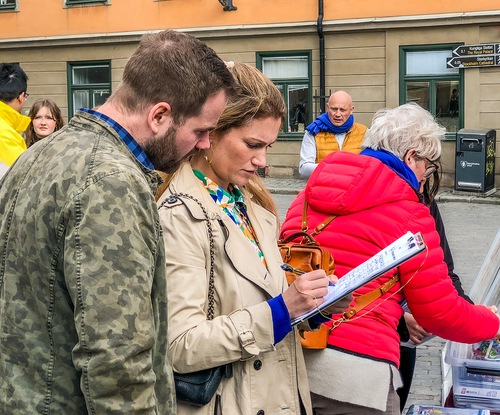 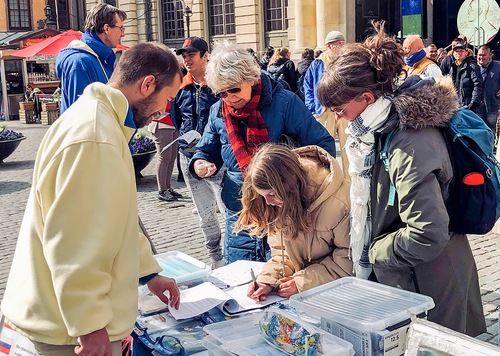 Two sisters from the U.S. noticed practitioners doing the exercises. They stopped and talked with them for a long time. When they learned more about Falun Gong, they took the initiative to sign the petition.

They explained that they had seen a car tour that practitioners held in the U.S. to clarify the truth and expose the CCP’s persecution. The beauty of Falun Dafa left a deep impression on them.

One of the sisters said, “I didn’t expect to meet practitioners in Sweden. You spread the messages in various ways around the world, let people know about the crimes committed by the CCP, and help people be aware of the CCP’s nature. It’s really amazing. The CCP has done so many bad things, and we all wish that it will disappear as soon as possible.”

On April 23 & 24, 1999, police officials in Tianjin, a city near Beijing, assaulted and arrested dozens of practitioners who had gathered outside a magazine office to discuss errors in a recently published article attacking Falun Dafa. As word spread of the arrests and more practitioners inquired with officials, they were told they had to take their appeals to Beijing.

“Opening a Pharmacy: Proving the Honesty of Practitioners”