(Minghui.org) Falun Dafa practitioners put up banners at ten busy intersections throughout downtown Toronto on April 23, 2022, and talked to people about the April 25 peaceful appeal in Beijing 23 years ago. That evening they held a candlelight vigil in front of the Chinese Consulate at 7 p.m. to peacefully call for an end to the persecution. 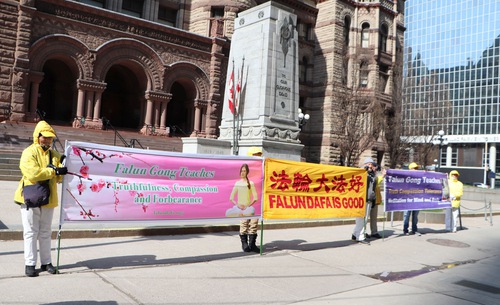 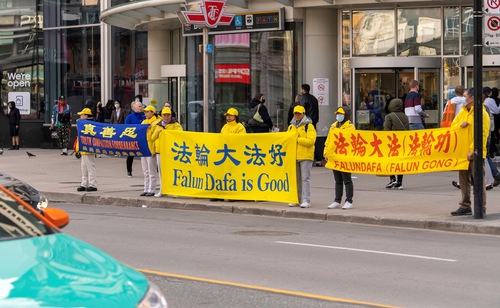 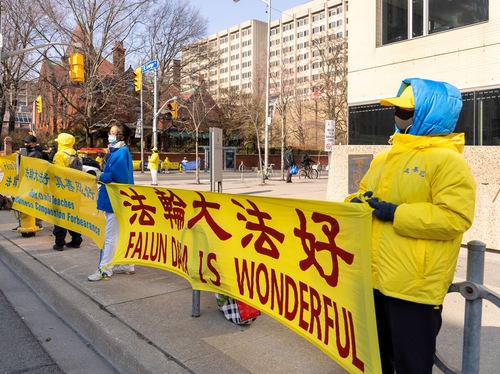 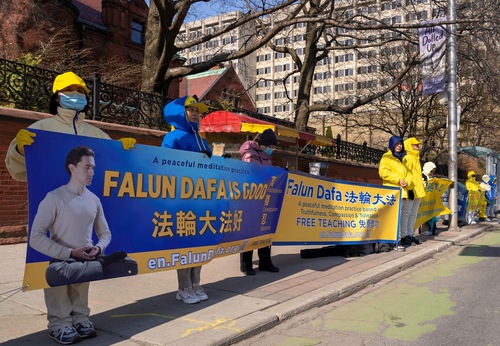 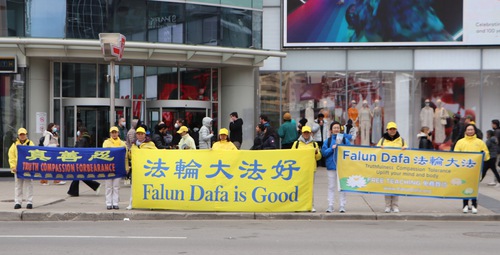 Practitioners in Toronto displayed banners and told people about the on-going persecution in China during a day-long event on April 23, 2022. 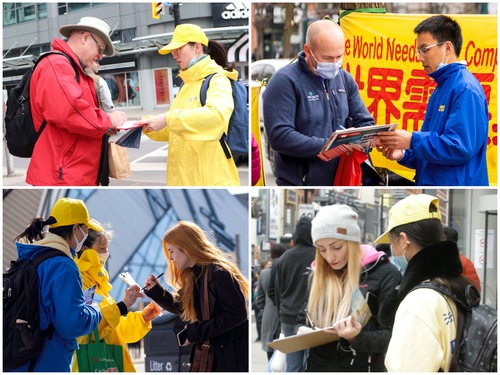 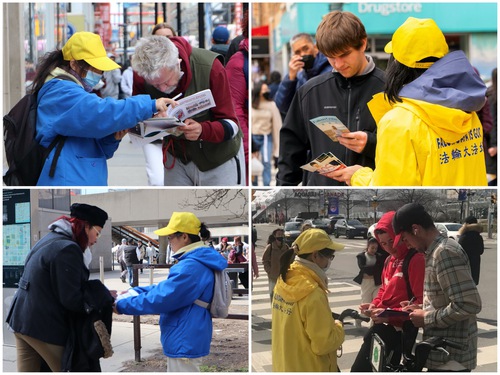 Many passersby signed the petition calling for an end to the persecution. Some people wanted to learn more about the practice. Others expressed their long-term support. Some Chinese quit the Chinese Communist Party (CCP) and its affiliated organizations on the spot. 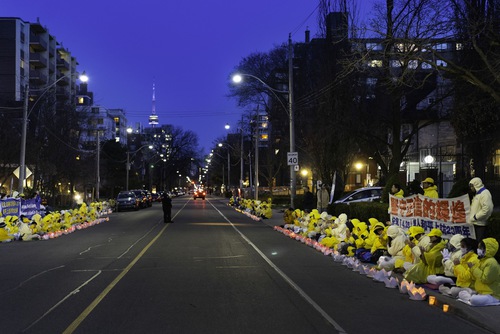 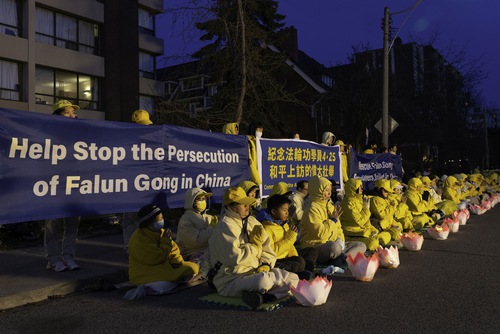 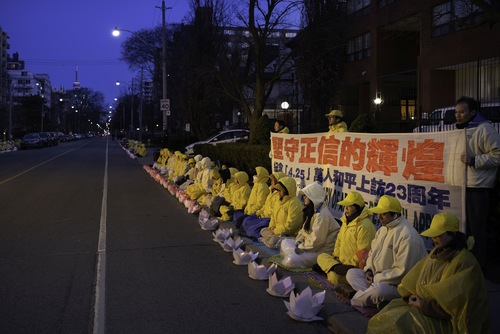 Practitioners held a candlelight vigil in front of the Chinese Consulate that evening.

Music Producer: I Admire Your Peacefulness

Mr. Douglas, a music producer, said he often saw practitioners in front of the Chinese Consulate. He said, “I knew about Falun Gong before, but I haven’t seen such a big event. I’ve made music about religion and freedom of belief, and I’m going to incorporate elements of Falun Dafa into my music in the future.” 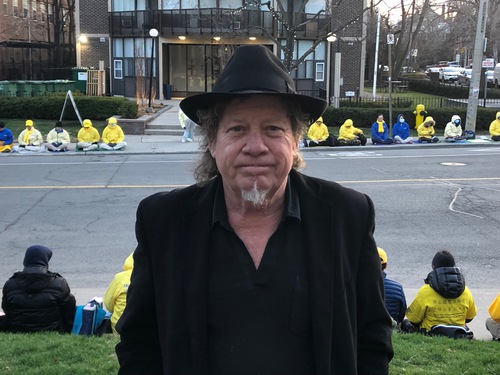 Practitioners told Mr. Douglas about the April 25 appeal and how the CCP persecutes Falun Dafa. Mr. Douglas said, “You are all very peaceful. I admire you for remaining peaceful after experiencing the persecution. I live across the street from the Chinese Consulate, and I know how the CCP has infiltrated Western society. Telling people about the true situation is cleansing the infiltration.” Mr. Douglas said he would continue to support practitioners.

Resident: The Whole World Knows about the CCP’s Evil Deeds 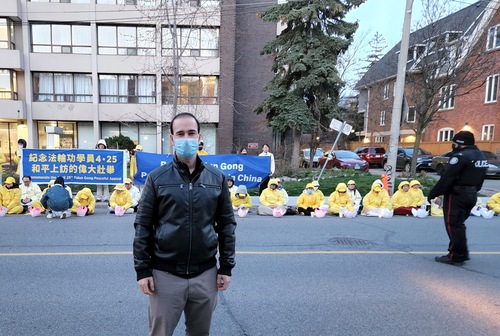 Mr. Liam, who lives across the street from the Chinese Consulate, said he saw practitioners peacefully protesting in front of the Chinese Consulate before. He said, “I’ve been to China, but I don’t like the CCP’s totalitarian rule which makes everyone live under pressure.” He said. “I moved to this neighborhood and was very honored to meet Falun Dafa practitioners, and I support this peaceful protest against the persecution.”

He also expressed his admiration of the Falun Dafa’s core values of Truthfulness-Compassion-Forbearance. He said, “The world needs such guidelines, and everyone can learn something from these principles.”

He encouraged practitioners to continue exposing the persecution, saying, “I hope you can persevere. I feel great energy when I see your courage. I hope this energy will influence more people.” 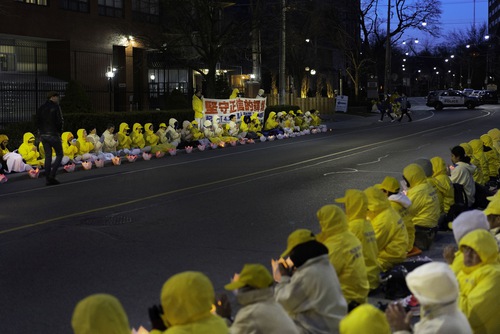 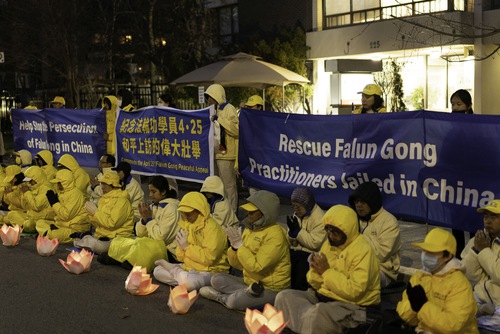 The practitioners held a candlelight vigil at night.

Police on Duty: Support Practitioners’ Peaceful Protest Against the Persecution

After learning about the significance of the event, the police officers on duty blocked off half of the road and allowed the practitioners to sit in the road.

For several hours during the event, the officers on duty directed traffic and asked passing cars to slow down.

One officer said, “I participated in some of their other activities, so I knew why they held these events. I agree with them (Falun Dafa practitioners) for opposing the persecution of the CCP in such a peaceful way.” He also said he was very aware of the persecution taking place in mainland China and said he knew there were no human rights there.

Immigrant from China: Our Family Knows Falun Dafa is Good

As Mr. Lu’s family of five passed by the TV Tower, he smiled as he accepted the informational materials handed to him and said, “Thank you, we have been living in Canada for more than ten years, and our whole family knows that Falun Dafa is good.”

Mr. Lu said he also knew about the CCP’s persecution of practitioners, including the live organ harvesting. They quit the CCP and its affiliated organizations. They accepted the handmade lotus flowers with the message of Falun Dafa and said they know that Falun Dafa is good and Truthfulness-Compassion-Forbearance is good.

Mr. Brandy, who works at the Toronto Museum, listened very carefully to the introduction of Falun Gong and signed the petition. He said, “I think this practice is very good. I took a leaflet with information about the free online teaching. I will learn the exercises. Whatever the CCP doesn’t like must be good.”

He took an extra leaflet when he left and said, “I will give it to my friend. They will like it.”

Manager: Falun Dafa Is an Ancient and Wonderful Practice 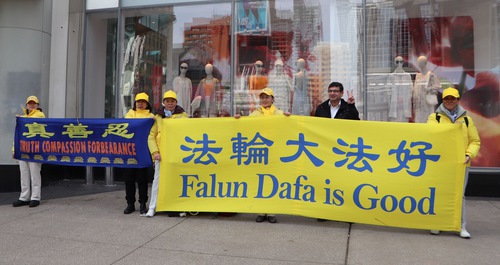 Mr. Mo, the manager of an Internet company, was very excited to see practitioners. He took a photo with them as he passed by the intersection.

He said, “I know China has a 5,000-year history of traditional civilization, and Falun Dafa is an ancient and wonderful practice. I also know that practitioners are being persecuted very cruelly in China because the Chinese Communist Party is evil and wants to control the world. I believe that evil will not prevail and will meet its doom sooner or later. I believe that Falun Dafa will prevail.” 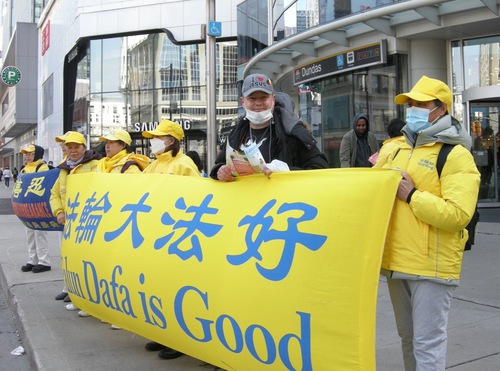 Mr. David A. Brown is a pastor of a Christian church in Toronto and a high school teacher. After signing the petition, he said, “Falun Gong is very peaceful. The Chinese Communist Party shouldn’t persecute them because of their beliefs, so I support their activities today.”

He added, “China has a 5,000-year history of civilization, and I also know that China has the culture of Confucius, which preaches ‘benevolence, righteousness, propriety, wisdom, and faith,’ but the CCP has destroyed all of that. I like the traditional Chinese culture, before the CCP. That was the real China.”

He said, “When I hear that Falun Gong practitioners are being persecuted by the CCP, even having their organs harvested while they’re alive, I feel sad. This persecution needs to stop immediately.” He gave the practitioners his contact information and said he would help if there was anything that he could do.

College Student: I Support You 100% 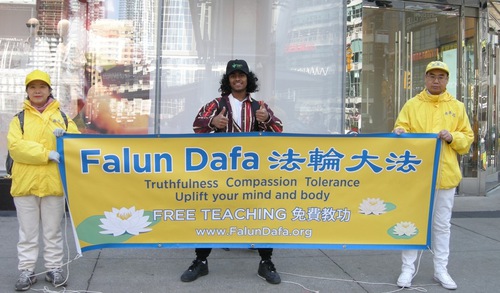 Mr. Mclovin is majoring in biotechnology at Ryerson University. When he learned that today’s event was to commemorate the 23rd anniversary of Falun Gong practitioners’ peaceful appeal on April 25, 1999, he said, “The Chinese Communist Party does not allow people to have any beliefs. Falun Gong practitioners should be free to practice their exercises.”

I Want to Practice Falun Gong 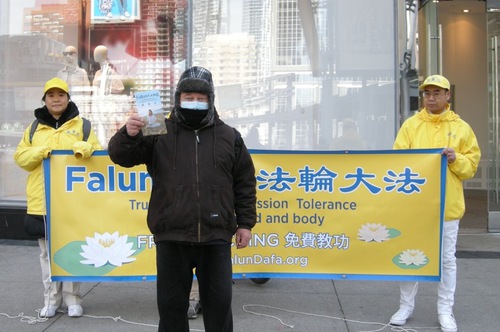 Originally from Poland, Mr. Botuslaw Tarlawsai moved to Canada forty years ago and is a retired postal worker. He said, “Falun Gong practitioners should be free to practice in any country. I signed the petition to support them. I also want to practice Falun Gong. I will learn it when it gets warm in May.”