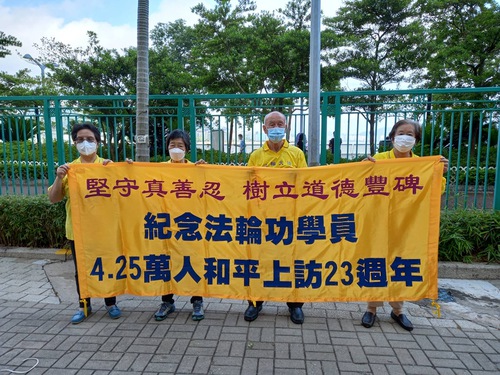 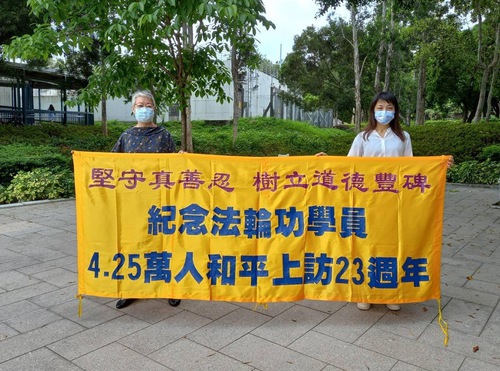 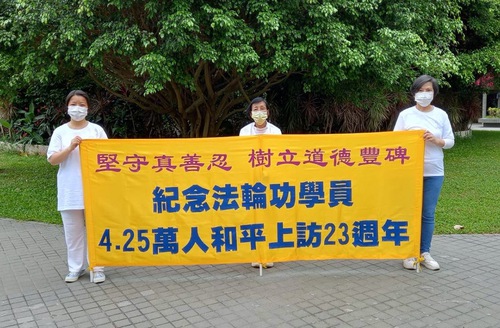 Falun Dafa practitioners in Hong Kong hold banners to commemorate the 23rd anniversary of the April 25 peaceful appeal in Beijing.

Before the COVID pandemic, Falun Dafa practitioners in Hong Kong held events such as parades and assemblies every year to mark the anniversary of the April 25 Appeal. However this year, due to Hong Kong’s limit of public gatherings of four or less, practitioners held small events in groups of 2 to 4. The banners were worded, “Commemorate the 23rd Anniversary of the April 25 Peaceful Appeal by over 10,000 Falun Dafa Practitioners” and “Be Steadfast in the Belief in Truthfulness, Compassion and Forbearance.”

Ms. Zhou lived in Shenzhen 23 years ago. She said that in April 1999 she heard that the Tianjin police arrested and detained many practitioners. She wanted to go to Beijing to submit her appeal. She later learned that over 10,000 practitioners went to Beijing on April 25th and the Tianjin practitioners were released. Afterwards, the then CCP General Secretary, Jiang Zemin, started the persecution of Falun Dafa. In November that year, Ms. Zhou went to Tiananmen Square in Beijing to raise her banner with the words “Falun Dafa Is Righteous” and she was arrested. The following day, she was repatriated back to Hong Kong.

Ms. Zhou said that some Hong Kong citizens wrongly believe the CCP’s propaganda. She said, “Falun Dafa practitioners were not against the government. They were just expressing their thoughts. When the government accepted their appeal, the practitioners left very quickly. Allowing people who are being treated unfairly to speak about it is very normal, but under the CCP regime, no one is allowed to speak.”

Ms. Zhou said that although the April 25 Peaceful Appeal did not manage to stop the persecution of Falun Dafa practitioners by Jiang Zemin and the CCP, their calm and upright response and courage deserves society’s respect. When she went to Beijing to appeal, “Many policemen understood the truth and knew that Falun Dafa teaches people to be good. Some of them did not want to arrest practitioners.”

Ms. Zhou said that from the April 25 Peaceful Appeal to the great tide of quitting the CCP and its affiliated organizations, Falun Dafa practitioners have always taken a peaceful and rational approach in their efforts to call for an end to the persecution and to awaken the peoples’ conscience.

“Falun Dafa promotes the principles of Truthfulness, Compassion, and Forbearance. Being truthful means to speak the truth, do true things and be a true person, being compassionate means to treat people with kindness while forbearance means to not retaliate when people hit or scold us. Falun Dafa has helped countless people obtain a healthy body, a harmonious family, and raises their morals. This only benefits society without harming any country or ethnic group.”

For the past 23 years, Ms. Zhou has been dedicated to delivering the truth about the persecution of Falun Dafa to people, “I am here in Hong Kong and it has gone through some things. Even if there is pressure, I cannot back off.” She added, “No sort of suppression will be able to make our steadfast heart to cultivate in Falun Dafa waver.”

Ms. Wu, another practitioner who displayed banners, said that in Hong Kong there are “one country two systems.” She hopes to encourage those Falun Dafa practitioners in China who are being persecuted and also tell people about the CCP’s persecution of Falun Dafa. “Society is in turmoil now. If everyone can abide by Truthfulness, Compassion and Forbearance when they encounter difficulties, this world will become so wonderful! I really hope that the people can understand Falun Dafa and take a look at Falun Dafa’s main book Zhuan Falun so that they can find a piece of pure land amid this chaos.”

Ms. Zhou pointed out that the April 25 Peaceful Appeal is the largest assembly appeal event by the Chinese people since the 1989 Democracy Movement. The event was finally resolved peacefully with the government’s response to the people’s appeal which attracted international attention.