(Minghui.org) Falun Dafa practitioners in Belgium held an information day in Antwerp’s City Center on April 9 to introduce the spiritual practice to the public. Established in the Middle Ages, Antwerp is Belgium’s second largest metropolitan area after Brussels. Practitioners demonstrated the exercises and told people about Falun Dafa. Many people signed a petition calling to end the persecution in China. 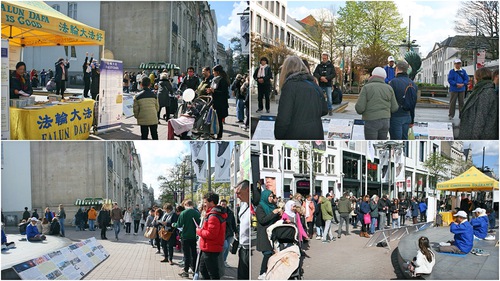 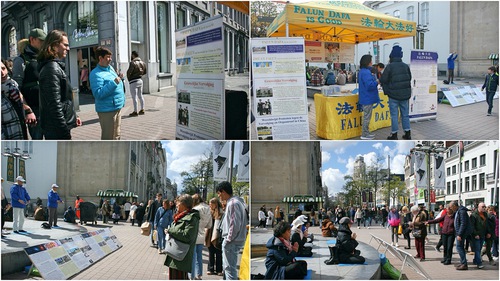 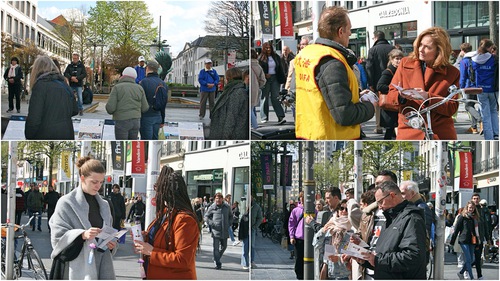 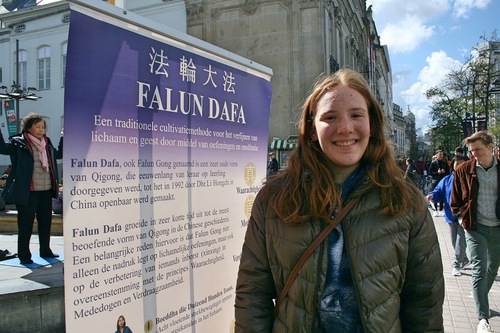 Lara Vereyen believes the principles of Truthfulness-Compassion-Forbearance can benefit everyone.

The city center was crowded and people said they were glad the pandemic restrictions were eased. Lara Vereyen came out to enjoy the spring weather and stopped to watch the exercise demonstration. She asked about the ongoing persecution in China. “Thank you for coming here to safeguard your belief and to expose the brutality in China,” she said while she signed the petition, “More people need to know about these crimes, especially forced organ harvesting.”

She also thanked practitioners for telling people about Falun Dafa’s teachings. “Truthfulness-Compassion-Forbearance are great principles. I hope more people will know about them and cherish them,” she said.

Susan Alva and her friend Sophie were excited to learn the exercises. They are also happy to hear about a group exercise site nearby. “I like Falun Dafa because it improves physical health and brings one peace and relaxation,” Susan explained, “I think the teaching of Truthfulness-Compassion-Forbearance will help people to have better relationships with each other and lead more productive lives.”

Her friend Sophie was sad to see that such a wonderful system is suppressed in China. “The tragedy must stop,” she added. 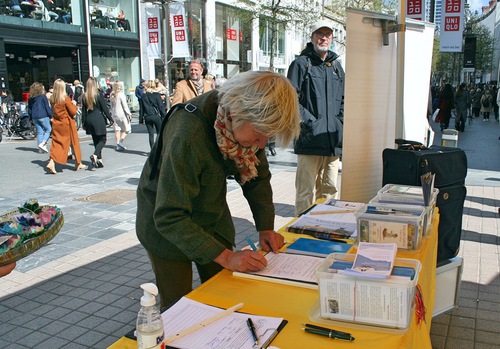 Suazzane Slegers came with her husband. Having heard about the Chinese Communist Party’s (CCP) brutality in the past, she knows the regime often misleads people with lies. She signed a petition calling to stop the persecution and she wished the practitioners well.

A young Chinese woman came to the table and asked about Falun Dafa. She said she heard many things in China about Falun Dafa, but all of them were negative. A practitioner explained that the CCP has been wiping away traditional Chinese culture for decades and this suppression was another campaign launched by the regime to brainwash people.

When the practitioner explained how the CCP used lies such as the staged self-immolation incident at Tiananmen Square to stir up hatred against Falun Dafa, the woman was shocked. The practitioner pointed out loopholes in the video footage and reminded her that the CCP uses propaganda and censorship to deceive people.

The woman said she would share the information with her friends in China. “I will also read online information about the practice and learn more,” she remarked.