(Minghui.org) Ms. Sun Xia of Ning’an City, Heilongjiang Province, embraced a renewed life after many of her ailments were cured by practicing Falun Gong, an ancient spiritual and meditation discipline. Having lost all hope, she was delighted to see her life turned around and her family that was on the verge of collapse was brought together again.

Only a few years later, the Chinese communist regime ordered the nationwide persecution of Falun Gong. Since then, Ms. Sun has been repeatedly arrested and harassed for upholding her faith, leaving her family in deep despair.

Ms. Sun, 59, had multiple diseases since she was young, including rheumatoid arthritis, heart disease, stomach disease, and chronic headaches. Her income was only enough to cover her basic daily expenses, and she couldn’t afford to see a doctor. She always looked sad and listless.

Her family life was worse. Her husband had a bad temper. He often threw things around over the slightest displeasure, and sometimes even beat her. Their child was always scared to witness the violence and couldn’t stop crying. Ms. Sun dared not fight back, but only cursed at him. In Ms. Sun’s eyes, her husband was full of flaws: uneducated, selfish, and uncaring. She concluded that she must have very bad luck to have married him.

When she had almost reached her breaking point, her mother suggested that she try Falun Gong. Ms. Sun had heard many people mention that Falun Gong had miraculous effects in eliminating diseases and improving fitness. And it was free, so she thought, “Why not give it a try?”

Ms. Sun learned the exercises and also strove to live by the principles of “Truthfulness-Compassion-Forbearance.” Gradually, her health problems disappeared and her character improved. When her husband lost his temper again, Ms. Sun would look within and try to identify what she could do better. When she didn’t hate her husband anymore, she saw his many good traits and often put herself in her husband’s shoes. After witnessing her change, he also changed.

After the Chinese Communist Party started the persecution of Falun Gong in 1999, Ms. Sun, was repeatedly harassed, detained, imprisoned, and tortured for upholding her faith.

She was arrested by police officer Xu Huibin on June 1, 2000, for reading Zhuan Falun, the main teaching of Falun Gong, at home. She was directly taken to the Ning’an Detention Center. When she was about to be released on June 21 that year, the police extorted 5,000 yuan from her.

On April 22, 2008, Ms. Sun and three other practitioners were arrested while distributing Falun Gong informational materials. As she refused to wear the inmates’ uniform at the detention center, she was held in solitary confinement for 24 hours. She was left barefoot to walk on the damp concrete floor. While she was detained, the police officers broke into her apartment and took away her Falun Gong books. 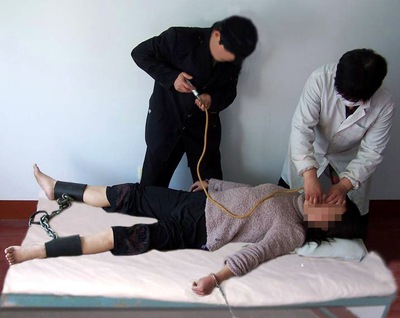 Ms. Sun was transferred to Ning’an Detention Center on June 4. She went on a hunger strike to protest the arbitrary detention and was force fed. Ms. Sun resisted and she was tied up in a spread eagle position for 24 hours.

Imprisoned for Five and a Half Years

Ms. Sun was sentenced to 5.5 years by the Ning’an City Court around August 2008. The other three practitioners arrested with her, Ms. Zhou Xiuhui, Ms. Ding Shuhua and Ms. Li Yanbo, were given 7, 6, and 5 years, respectively. The four practitioners were taken to Heilongjiang Women’s Prison in Harbin City on January 21, 2009.

The guards forced Ms. Sun to sit on a small stool without moving every day unless she agreed to write a statement giving up her faith. The inmates monitored her around the clock and followed her when she used the restroom or washed herself. She wasn’t allowed to talk to others either.

Starting from August 2009, Ms. Sun was taken to the seventh ward for forced labor. In order to force her to renounce Falun Gong, Wang Xiaoli, the head of the seventh ward, transferred her to the ninth ward in March 2013 for intensified persecution.

As Ms. Sun refused to sit on the small stool, watch videos slandering Falun Gong or denounce Falun Gong, the guards instructed inmates Li Shumei and Huang Liyan to tie her to the bed.

The inmates tied a plastic washboard to Ms. Sun’s legs so that she couldn’t bend or move her legs. They also sealed her mouth for 48 hours and didn’t allow her to sleep during this time. As soon as she closed her eyes, the inmates would wake her up by hitting or poking her with wooden sticks.

Ms. Sun tried to tell the inmates how wonderful Falun Gong is and why the persecution is wrong. The inmates refused to listen, and humiliated and verbally abused her. They tied Ms. Sun’s hands over her head to the upper rail of the bunker bed and stuffed socks and insole into her mouth. One inmate threatened to catch a cockroach and put it in her mouth.

After two days of torture, Ms. Sun’s legs and feet were swollen and she was extremely weak.

Three years after she was released, Ms. Sun was arrested again on March 26, 2016, for talking to people about Falun Gong. She was detained at the Ning’an Detention Center.