(Minghui.org) Today's news from China includes incidents of persecution that took place in 13 cities or counties in 6 provinces, where at least 27 practitioners were recently persecuted for their belief. 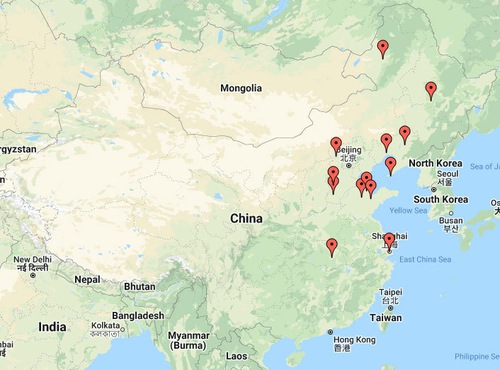 Among these practitioners, Ms. Yang Shuqin, 76, was sentenced to eight years in prison and her pension has been suspended since August 2020.

Ms. Zhang Liyan, 55, was sentenced to three and a half years in prison. She has not yet reached the retirement age. After she was released she will have to pay back the pension payments she received while imprisoned. Her pension has been withheld since August 2020.

Mr. Guo Changsuo was expelled from public office and became displaced. Mr. Sun Wentian’s pension has been withheld, and he has been displaced for five years and four months.

Mr. Cheng’s and his wife’s pensions were withheld in 2021.

Ms. Yang Jiamin’s lawyer was notified in February 2022 that she was sentenced to one year in prison. She will be released on May 26. Ms. Yang is being held in the Jiang’an Detention Center. Due to the pandemic, she was not transferred elsewhere. The detention center asked her family to send in Chinese medicine needed for treatment but did not allow them to visit her.

Ms. Hu Hui was followed and arrested by officers from the Xindu District Domestic Security Division when she went to another practitioner’s home to read Zhuan Falun on August 28, 2020. She was tried by the Qiaodong District Court on August 17, 2021, and was sentenced to two years in prison and fined 3,000 yuan.

Ms. Hu and her family appealed to the Xingtai City Intermediate Court. The intermediate court held a secret trial via video link and upheld the original verdict. Ms. Hu was taken to the Shijiazhuang Women’s Prison on February 17, 2022.

Officers from the Zhanqian Police Station broke into Ms. Chen Yawen’s home and arrested her around 7 p.m. or 8 p.m. on February 8, 2022. Ms. Chen’s family went to the police station to demand her release. The officers did not allow them to see her.

After his father, Mr. Chu Liwen, passed away due to persecution, Mr. Chu Qinghua has become displaced.

Following orders from the Xiashan Domestic Security Division officers from the Taibaozhuang Police Station went to Mr. Chu’s sister’s home. They asked where Mr. Chu was in order to continue persecuting him.

Ms. Wang Xia, Ms. Cui Guifen, and Ms. Wang Muyi received notices from the district court that they would be tried on February 28, 2022, and the judgment would be announced.

The three practitioners were arrested on November 18, 2020. Ms. Wang Xia was released on bail for health reasons. Ms. Cui and Ms. Wang Muyi have been held in custody for over one year.

Ms. Bao Hongli was reported to the police by the community property management staff while talking to people about Falun Gong near the Paoya Bus Station on December 15, 2021. She was arrested by officers from the Paoya Police Station. The officers ransacked her home and confiscated her Falun Gong books and photos of the founder of Falun Gong. She was given 10 days of detention, which was not enforced at the time due to the pandemic.

On February 15, 2022, the police notified Ms. Bao’s family that she would be detained. Ms. Bao was taken to the Dalian Detention Center on February 17.

Zhang Renfu (gender unknown) from the Wanrong Residential Community on Yanchang Road, has been missing for many days. Further details of this case are being investigated.

Mr. Dong Yiran was arrested by six or seven officers from the Maluwan Police Station while distributing Falun Gong materials on February 24, 2022. His home was ransacked. The officers videotaped him. He was given a physical exam, and learned that the officers planned to take him to a detention center.

Mr. Miao Jianguo was arrested at home by plainclothes officers from the Zijin Police Station, Linghe District, on February 21, 2022. Mr. Miao is being held in the Jinzhou City Detention Center. The police refused to issue a written notice to his family.

Ms. Yang Fengying from Qiaoxi District was reported to the police after she distributed Falun Gong materials on February 12, 2022. She was arrested at home by officers from the Shenjiatun Police Station around 8 p.m. that evening. The officers ransacked her home and confiscated all her Falun Gong books, photos of the founder of Falun Gong, printed materials, an incense burner, and two cell phones. She was released that evening.

Pei Tao from Beiguan Village led a group of people to Mr. Zhou Yong’s workplace on the morning of February 22, 2022. They took Mr. Zhou to the Beiguan Police Station, where they asked Mr. Zhou where he got Falun Gong informational materials. Mr. Zhou refused to answer, and returned home after 5 p.m. that afternoon.

The officers confiscated a photo of the founder of Falun Gong which was on the wall, a poster of a Falun symbol, a printed copy of Lunyu, and an audio player.