(Minghui.org) Today's news from China includes incidents of persecution that took place in 9 cities or counties in 7 provinces, where at least 13 practitioners were recently persecuted for their belief. 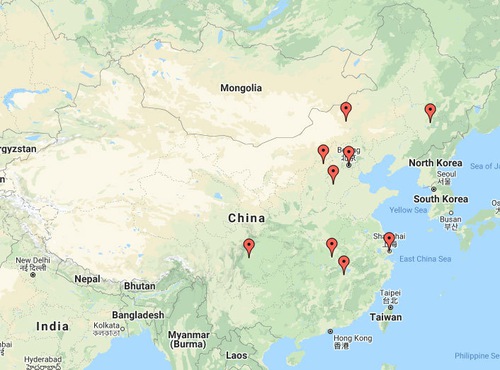 Ms. Liu Ruiyun and her husband Mr. Tao Yawei from Jilin City, both in their 60s, were arrested at their daughter’s home in Beijing on May 8, 2021. They were arrested by officers who waited nearby to monitor them. Their daughter’s home was ransacked. Their family members in Jilin City have not been able to get more information about them, and it was difficult for them to go to Beijing because of the pandemic.

During past 23 years of CCP’s (Chinese Communist Party) persecution of Falun Gong, the couple has been harassed, arrested and thrown into forced-labor camps multiple times for their perseverance in practicing Falun Gong. They were sent to a forced-labor camp in 2001 and held there for one year. After they were released they continued to be harassed. They had to move from place to place in 2008 to avoid the persecution. In 2015, they were again harassed multiple times.

Ms. Song Xiaohua was persecuted in February, 2019 and was held in the Hohhot Women’s Prison. Her 3-year prison term was to end on February 28, 2022. Authorities from the local 610 Office of Domestic Security Division said they would pick up Ms. Song and they planned to continue persecuting her.

The arrest of Ms. Xing Gezhen was officially approved.

Ms. Liang Yening, her husband Mr. Zhang Linyu and their daughter were arrested at their rented room on January 23, 2022 by officers who came through a window. The daughter was released the next day. No further information is available.

Village committee members Zhong Wei and Huang Tihe, and four officers from the Sanhe Police Station went to Ms. Zhang Shengyu’s home and harassed her on January 21, 2022. Ignoring Ms. Zhang objections they forced her to have her picture taken, sign a document and print her fingerprints.

Ms. Dang Fengxia was arrested on the eve of the 2022 Winter Olympics in Beijing. Her home was ransacked.

Ms. Jiang Lanying, 55, went to practitioner Ms. Chen’s home for a visit on July 18, 2019. She was arrested as soon as she stepped inside by officers from the Domestic Security Division who were ransacking Ms. Chen’s home. She was taken to the Nanchang No.1 Detention Center and held there. She was then sentenced to 2 years and 6 months in prison by the Xihu Court and fined 30,000 yuan (approximately $4,700). She was released on January 18, 2022.

Ms. Jiang was previously sentenced to 5 years in prison on March 19, 2003 by the Nanchang Intermediate Court, because of her perseverance in practicing Falun Gong. On September 10, 2015, she was sentenced to 3 years and 6 months by the Zhangshu City Court.

Ms. Jiang Dailan was arrested on June 14, 2019 by Bai Xiangang, an officer from the Tenglong Police Station, when she was explaining the facts about Falun Gong and distributing informational brochures at the Jiahai Industrial Park. Her home was ransacked the same day. She was taken to the Dongxihu Custody and 10 days later was transferred to the Dongxihu Detention Center where she was held for one and a half years. Family visits were not allowed. The court tried Ms. Jiang without notifying her family, and sentenced her to 2 years and 6 months in prison. She was sent to the Hankou Women’s Prison.

In December, 2020, 5,000 yuan (approximately $800) was taken from her pension. The authorities claimed it was a fine but she was not notified. Her pension has been withheld since October, 2021.

When Ms. Jiang’s prison term was over on December 13, 2021, officers rushed to pick her up. Without notifying her family she was transferred to the Huangpi brainwashing center. They also ordered community staff where Ms. Jiang’s residence was located to provide photos of her sick son (her son is in the terminal stage of cancer and the cancer cells have transferred to multiple parts of his body. His belly, legs and feet are swollen). They attempted to use these photos to torture Ms. Jiang.

In the brainwashing center, Ms. Jiang was forced to transcribe the history of Chinese Communist Party every day. She was ordered to use up all the ink in a brand new ball pen each day while transcribing. After torturing her for over 20 days, they released her. When Ms. Jiang’s relative brought her home from the brainwashing center, she could not walk and her eyes were badly swollen.

Community staff and officers in Pudong District monitored Ms. Zhou Ling and Mr. Chen Jie around the clock during the Chinese New Year in February. They claimed they were protecting the Beijing 2022 Winter Olympics. They even followed Ms. Zhou and Mr. Chen when they went to their workplace. Their lives were seriously disrupted.

“Single Father Sentenced to Four Years in Prison, Wife Died Seven Years Ago, Both Persecuted for Their Faith in Falun Gong”