(Minghui.org) Despite the winter weather, Falun Dafa practitioners in Stockholm continue holding events every Friday and Saturday at Mynttorget, a public square next to Sweden’s Parliament House. They introduce the spiritual practice to the public and tell them about the ongoing persecution in China.

Many people stop to talk to practitioners or learn the exercises. In addition to signing a petition calling to end the Chinese Communist Party’s (CCP) persecution, many thank practitioners for being there and telling people about this important information. 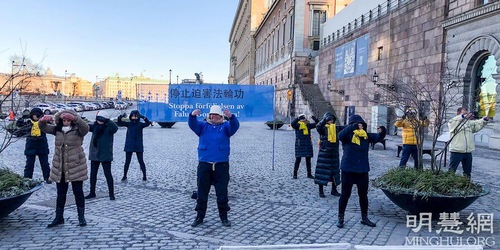 Practitioners come to the public square in front of Parliament House every Friday and Saturday afternoon. 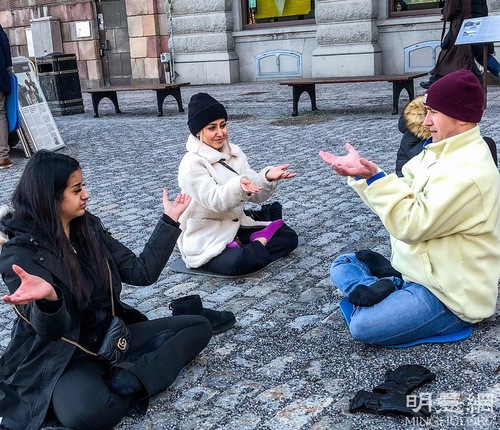 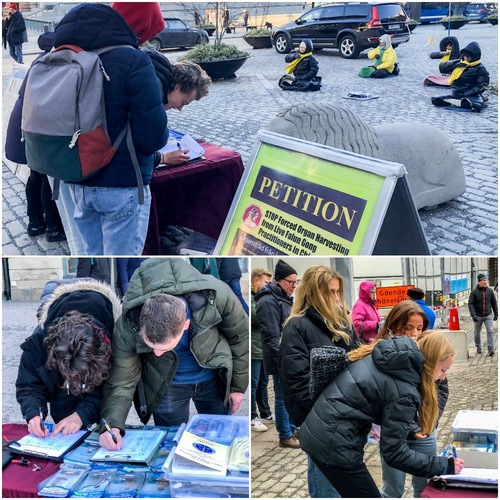 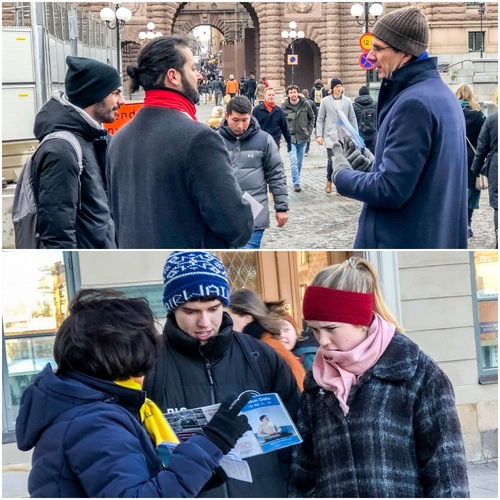 People learn about Falun Dafa and sign the petition to end the CCP’s persecution of the spiritual practice.

One particularly cold Friday afternoon, a young man stopped at the booth and attentively read every poster. He introduced himself and said he was Makarenko from Bulgaria. “This is serious, it’s murder!” he exclaimed when he read the details of how the CCP tortures practitioners and even kills them for their organs. “How could someone do things like this? It is hard to imagine!” he added.

Makarenko was eager to know more about Falun Dafa and why the CCP targets such a peaceful group. Upon hearing that the regime’s atheist culture contradicts Falun Dafa’s principles of Truthfulness-Compassion-Forbearance, he was moved to tears and thanked the practitioner for telling him this. After signing a petition calling to end the atrocity, he also went on a “Reject the CCP” website using his phone and signed an online petition.

Shortly after leaving, Makarenko returned with hot coffee and placed it on the table. “I really want to thank you for telling me this,” he said, “I will also tell my friends about what is going on (in China) so that they will know about it.”

“I Know the CCP Well – It is Indeed Evil”

February 12 was a windy Saturday. Lena, a Japanese woman living in Sweden, signed the petition and said, “You are doing the right thing and you have my support!”

After a while, she called her daughter and son-in-law, and explained why practitioners were there. Seeing they were reluctant to sign the petition, Lena was upset. “Come and look at this – The CCP not only kills innocent people, but also sells their organs for profit,” she explained, “The regime has ruined Hong Kong and attempts to occupy Taiwan, and even the entire world.”

Lena said the CCP always says good things on the surface, while doing bad deeds behind people’s backs. “I lived in China for 7 years, so I know the CCP well – it is indeed evil,” she added.

A practitioner chatted with the daughter and son-in-law, and answered their questions. When they both signed the petitions, Lena smiled with relief.

Marie said she has a strong interest in traditional Chinese culture. “I read lots of news online and I know the human rights situation in China is terrible,” she said, “Hope all this will end soon.”

Not only did Marie sign the petition, she also encouraged her husband to sign. The husband dismissed it, saying one signature was enough. “No, you need to do your part. There is tons of information online and I will show you everything we see here is true,” she said.

Two young women stopped, read the information and talked with practitioners on February 11. After signing the petition, they explained they were both dancers from Germany and this was the first time they came to Sweden. They were happy to hear about Falun Dafa and learn about the persecution. “This is even more vicious than what Hitler did!” one of them exclaimed. 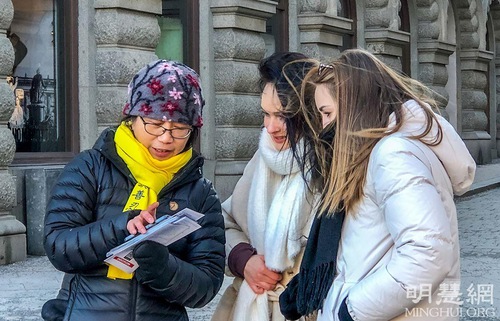 Two young women from Germany learn about the suppression in China.

Both of them thanked practitioners for telling the public about this. “If none of us does anything, doesn’t that mean we accept it?” one girl remarked, “We are glad to have this opportunity to sign the petition. As we know, remaining silent over brutality is more terrifying.”

A young Chinese couple recently came by. Both of them were students and they talked with a practitioner for a long time. The wife said her friend’s grandmother in China is a Falun Dafa practitioner, so she had a positive opinion about the practice despite the CCP’s negative propaganda.

She said, “We all know Falun Dafa is good. Back in China, we heard many people practice it freely overseas. Glad to see it here today.” After a practitioner explained to them how the CCP made up lies to defame Dafa, including the notorious staged self-immolation hoax, the couple said they were grateful to hear the truth.

They agreed to renounce their memberships in the Youth League, a junior organization of the CCP, to separate themselves from the regime.