Home > Persecution > Accounts of Persecution
Woman Held in Hospital for 7.5 Years as Police Who Beat Her Unconscious Refuse to Cover Her Medical Bill
Feb. 25, 2022 | By a Minghui correspondent in Hebei Province, China

(Minghui.org) Ms. Shi Yunlan was beaten unconscious by police and underwent a craniotomy following her arrest on October 9, 2014 for practicing Falun Gong. Because the police refused to pay for her medical bill, she has been held at the hospital for over seven years and a surgery is yet to be performed to repair her damaged skull. The medical bill her family has received is over half million yuan. 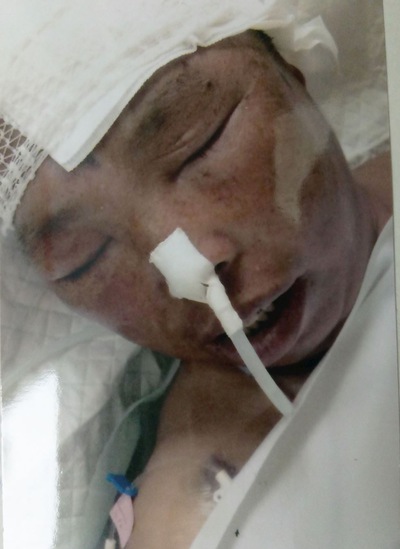 Ms. Shi, of Wuan City, Hebei Province, and another local practitioner, Ms. Liu Kaofeng, 60, were arrested on the evening of October 9, 2014 for putting up posters about Falun Gong. They were taken to the Huoshui Village Police Station in Wuan and interrogated in separate rooms by the police chief Guo Hongjie and deputy chief Li Xinshao.

Guo and Li beat Ms. Shi until she vomited and lost consciousness. Unable to wake her up, they took her to the Wuan First Hospital for resuscitation.

Ms. Shi underwent a craniotomy at 1 p.m. on October 10, 2014 at the hospital. But because her brain had been bleeding for too long, she could not talk clearly and was paralyzed after the operation. She also lost the ability to walk and has relied on a wheelchair to move around in the hospital for the past 7.5 years.

The Huoshui Police Station initially paid 1,000 yuan when Ms. Shi was admitted to the hospital. They promised her family that they would cover her medical expenses and provide compensation to them. But after paying a few more hundred yuan, the police began to shirk responsibility, claiming that Ms. Shi’s injuries happened after she tripped and fell.

Ms. Shi has stayed at the neurosurgery department at Wuan First Hospital since. Her medical expense has reached half a million yuan Because the police refused to provide a case report for her or pay the bill for her, the hospital refused to let her go. The doctors never performed the required operation to repair her skull either.

Woman Remains Hospitalized 3 Years After Being Beaten Unconscious by Police

Two Women Severely Beaten, One Requires Craniotomy as a Result

“Master Li, the Founder of Falun Gong, Saved My Family”