Mr. Shi Jianwei died at Yunnan Province No. 1 Prison while serving a 6.5-year term for his faith in Falun Gong. While the prison claimed that Mr. Shi died of liver cancer, his family suspects that he was tortured to death, given the bruises on his back and normal level of tumor marker protein. His body has been cremated against his family’s will. 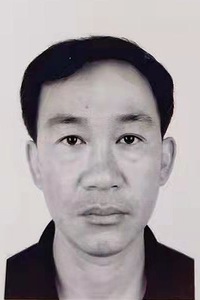 Mr. Shi, an English teacher, and his wife, Ms. Xiao Zhu, a physical education teacher, both worked at Binchuan County No.1 Middle School in Yunnan Province. After the persecution of Falun Gong began in 1999, both of them were barred from teaching for upholding their faith. They were arrested multiple times and held in detention centers, forced labor camps and brainwashing centers. When both of them were first detained, their daughter Shi Jia, then a second grader, was left alone at home and relied on the care of other local practitioners.

The family of three was arrested at home on September 7, 2015, after the police found the couple filing criminal complaint against Jiang Zemin, the former leader of the Chinese communist regime who ordered the persecution of Falun Gong.

The police interrogated the family for a day. They tried to force the daughter to report her parents’ lawsuit against Jiang and threatened to sentence her if she didn’t comply. She refused to say a word and was released the next day.

Mr. Shi was then taken to Binchuan County Detention Center and Ms. Xiao to Dalizhou Detention Center. In order to collect evidence against them, the police ransacked the homes of over ten local practitioners that they thought were in contact with the couple. Their Falun Gong books and flyers and such were all confiscated. Some practitioners and their family members were also interrogated and asked questions about the couple.

Ms. Shi and Ms. Xiao were tried by the Xiangyun County Court on June 23, 2016. Both of them insisted they were innocent and didn’t do anything wrong in practicing their faith or speaking out about it.

Mr. Shi testified that he was beaten three times in the basement of the police department by over ten officers. He said that the police twisted his arm backwards, kicked him in the back and on the stomach, as well as stomped his head. Ms. Xiao revealed that the police threatened her with their daughter’s personal safety in an attempt to extract a confession from her.

Deceased in the Prison

Beginning in 2019, the Yunnan Province No.1 Prison denied Mr. Shi his family visitation.

Two years later, on August 25, 2021, his family received a call from the prison that Mr. Shi was suspected of having liver cancer and had been taken to the prison hospital.

He had lost more than 20 pounds in recent months and was in critical condition, yet the prison still refused to release him on medical parole or allow his family to visit him, or to review his medical record, citing the pandemic and Mr. Shi’s refusal to renounce Falun Gong.

A month later, September 26, a prison guard called Mr. Shi’s family saying that he was on the verge of death and was being resuscitated. His family asked to visit him, but they were refused again, citing the pandemic.

Three hours later, the same guard informed the family that Mr. Shi had passed away and demanded they come to the prison to sign his cremation paperwork.

When the family saw Mr. Shi’s body at the funeral home, they noticed that he had bruises on his back and fluid accumulation in his abdomen. Suspecting he was tortured, the family refused to sign the cremation agreement and demanded to see his medical record.

A week later, the prison provided three of Mr. Shi’s blood test results. In all three tests, the levels of alpha-fetoprotein (AFP), an important indicator of liver cancer, were normal.

Mr. Shi’s family requested an autopsy, but the prison guards replied that they must prepay 100,000 yuan to cover the cost. They also threatened the family that if they didn’t agree with their assessment of the cause of his death, they could file a complaint against the prison with the procuratorate, but it wouldn’t change the result whatsoever.

Mr. Shi’s family demanded to take his medical record and blood test results with them, but were rejected by the guards, who claimed that they were only allowed to take a look at them.

The guards cremated Mr. Shi’s body against his family's will shortly after.

Several Practitioners Tortured to Death at Yunnan Province No.1 Prison

According to information collected by Minghui, several practitioners have been tortured to death in Yunnan Province No.1 Prison, including Mr. Fang Zhengping, Mr. Luo Jiangping and Mr. Liao Jianfu.

While details of the deaths of Mr. Fang and Mr. Liao remain to be investigated, it’s known that Mr. Luo was injected with toxic drugs, held in solitary confinement and forced to do intensive labor in the prison. Just three months into his term, he developed advanced cirrhosis and was released on medical parole on December 23, 2013 in critical condition. He passed away five days later, at the age of 51.

“Cultivating Well to Fulfill My Vows”