(Minghui.org) Stockholm, the capital city of Sweden, was hit with its first blizzard of the season on November 19, 2022. Even though the temperatures fell to -4 to -5 degrees Celsius (about 24 degrees Fahrenheit), Falun Dafa practitioners still held their truth-clarifying event outside the Stockholm Concert Hall. 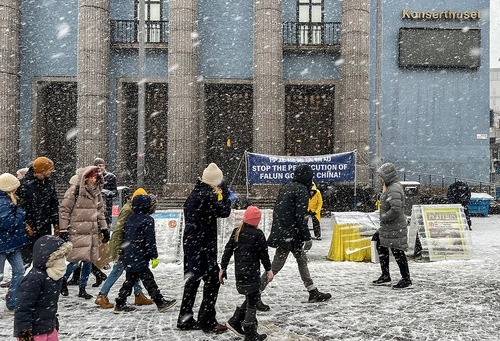 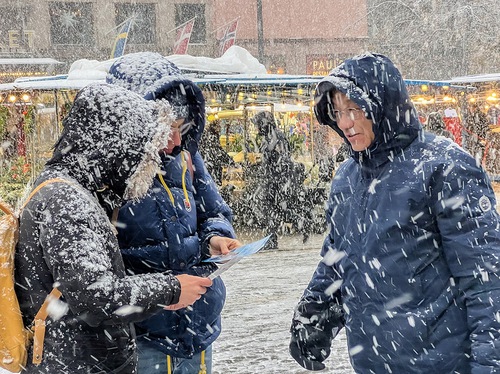 Passersby brave the blizzard to stop and listen to the practitioners explain the facts about the unprecedented persecution perpetrated by the Chinese regime. 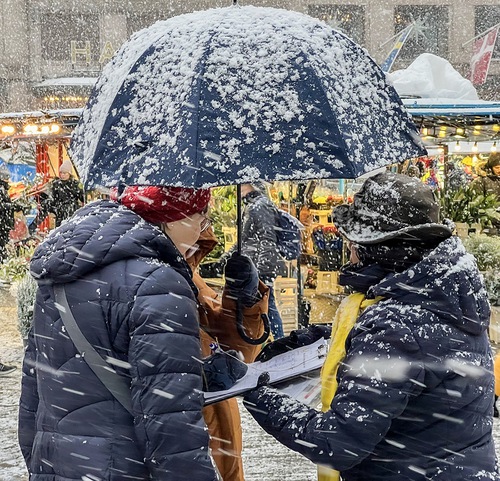 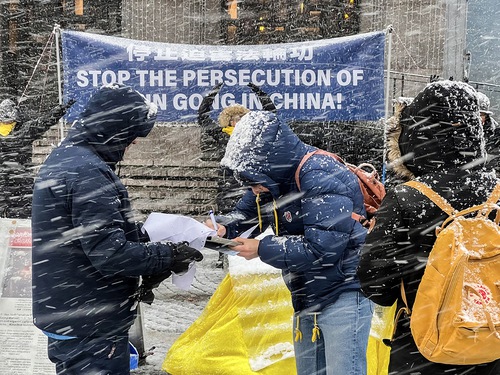 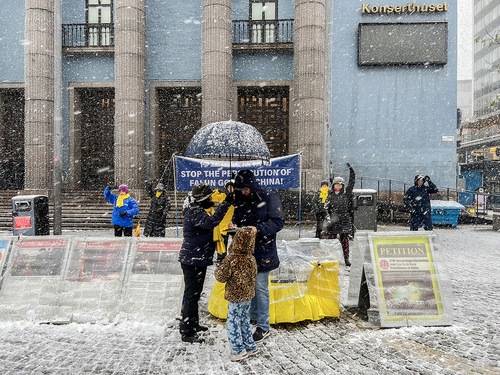 Practitioners braved the snow to demonstrate the Falun Dafa exercises. The tranquil music and peaceful scene attracted the attention of many passersby, who stopped and asked questions. Some asked for more information about the persecution. People who understood the facts were willing to sign the petition to support the practitioners’ effort to end the persecution. Some even expressed their interest in learning the exercises.

On the day of the event, the display boards had just been set up when a young woman about 20 stopped by and asked, “What is Falun Dafa? Why is such a peaceful practice being persecuted?” After learning about the reason for the event, she signed the petition calling for an end to the persecution without hesitating.

She introduced herself and said that she was from Slovenia, currently studying Mandarin at Uppsala University. “I have visited China, where I learned Shaolin Kung Fu. I like Chinese Kung Fu and qigong.” When she heard that there are free classes online that teach the Falun Dafa practice, she was elated. She took many photographs and said that she was very interested in Falun Dafa and would look into it more when she returned home.

A woman from Italy and a woman from Portugal signed the petition calling for an end to the persecution and also expressed interest in the practice. They were given Falun Dafa fliers in their respective languages, which really pleased them. The Portuguese woman said, “Wow! There are practitioners even in a country as small as mine. That is great!” They also said that the peaceful Falun Dafa music was good to hear in this bone-chilling weather. They decided to contact their country’s practice sites to learn the practice.

A man from Portugal said, “I am very curious about Buddhist cultivation and have been paying attention to and searching for information about it.” He was very pleased to hear that Falun Dafa is an upstanding cultivation practice that teaches people to cultivate themselves to be good by following the principles of Truthfulness, Compassion, and Forbearance. He said, “This practice is really good. It may be what I am looking for—I want to give it a try.”

A middle-aged man in short sleeves and speaking English was hurrying by when a display board about the Chinese Communist Party's (CCP) crime of live organ harvesting stopped him in his tracks. A practitioner who clarified the truth to him noticed how little he was wearing and asked, “Aren’t you cold?” The man just kept saying, “No worries. Please continue your explanation.”

He stood in the cold and listened very attentively as the practitioner explained. Then he signed the petition to protest the persecution. He said that he did not mind the cold, but the CCP’s cruel behavior sent chills down his spine. “This is the first time I’ve ever heard that the CCP government is actually committing such atrocious deeds, carrying out organ harvesting from living Chinese citizens. This is really shocking.”

He thought that the Falun Dafa practitioners had done very well to spread the truth and tell everyone to stop this unprecedented persecution. “Your sacrifice really deserves people’s respect,” he added

Olga, a Western practitioner, gained a healthy mind and body after she started cultivating Falun Dafa in 2014.

It is difficult to believe that she is already in her 70s and retired. Having benefited from cultivating Dafa, Olga participates in local truth-clarifying events whatever the weather. “I am very happy to see that there are still people coming to learn the truth despite this harsh weather and that they are willing to sign to petition to support us in ending the persecution. The snow is really heavy today, and we all look like snowmen. This is winter anyway!”

She smiled and said, “Although my hands and legs are almost frozen stiff, that doesn’t bother me, because my heart feels very warm and I feel happy!” She said that she wants to tell everyone in the whole world ‘Falun Dafa is good’ and tell them not to be deceived by the CCP’s lies.

Jenny, a Falun Dafa practitioner who works in the media, often participates in truth-clarifying events. She said, “Today, when I see the many people braving the snow to stop and listen to us clarify the truth, to stop and read the display boards, and to sign the petition to end the persecution, I’m very pleased. I have this ‘auspicious snow heralds a good year’ feeling in my heart. My heart is filled with sunshine and hope, so I am very happy!”

Xiao Liang, a kindergarten teacher currently attending vocational education training, still puts great emphasis on participating in truth-clarifying events despite her current intense course of study. “Despite the snow, I saw some practitioners demonstrating the exercises, some clarifying the truth, some decorating the banners and display boards, and some cleaning the snow off the display boards from time to time. Everyone, every link, cooperated with so much tacit agreement to make the event a success. This moved me a lot.” She said, “Being able to be part of this whole effort makes me feel very honored. I will cherish every event even more.”

The practitioners who participated in the event that day said, “If the CCP’s persecution does not end, we will not stop clarifying the truth and exposing the CCP’s violent acts!”

“Taiwan: China Fahui Articles Help Point out Gaps and Encourages Us to Be Diligent”