(Minghui.org) Taking advantage of the many tourists in the Chatelet neighborhood in the center of Paris, France, Falun Gong practitioners demonstrated the exercises, introduced the meditative practice, and talked about the persecution of their faith being perpetrated by the Chinese Communist Party (CCP) on the afternoon of November 19, 2022. They also collected signatures on a petition calling for an end to the CCP’s brutality.

There was a constant flow of people interested in hearing more about Falun Gong. Once they learned the truth about the CCP’s atrocities, they signed the petition. The CCP’s persecution of Falun Gong (also called Falun Dafa) practitioners is unprecedented. Some people shed tears, and some wanted to donate money to help. Some young people did not hesitate to meditate alongside the practitioners. People wanted to do their utmost to support Falun Gong, hoping to stop the persecution. 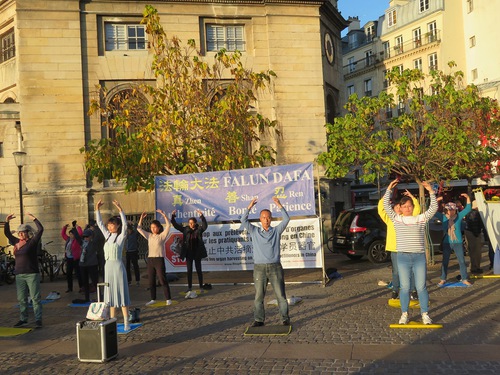 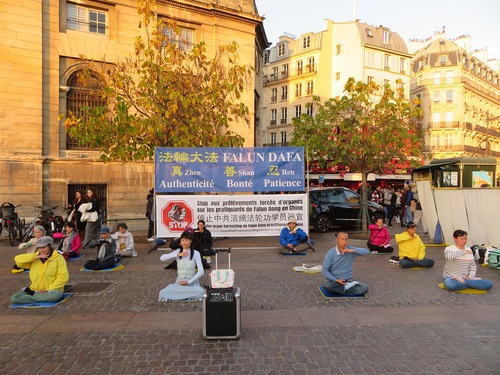 Demonstrating the Falun Dafa exercises in Paris on November 19 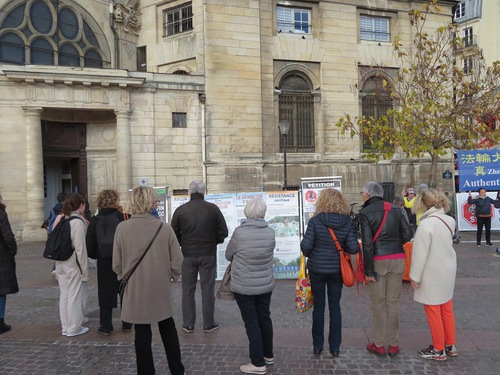 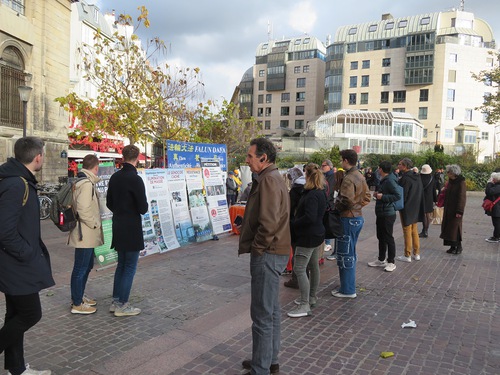 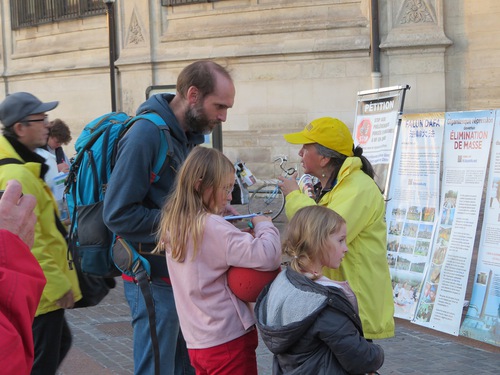 People read the display panels detailing atrocities committed by the CCP and talked to practitioners. 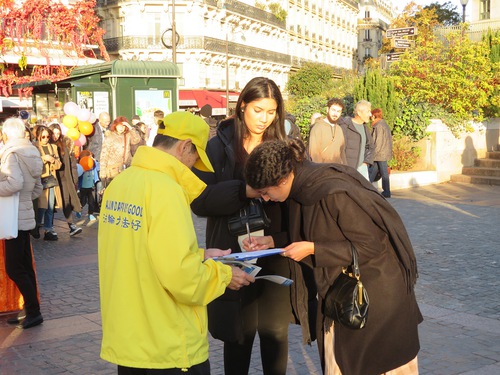 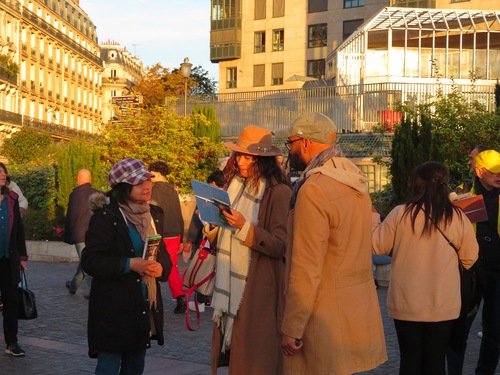 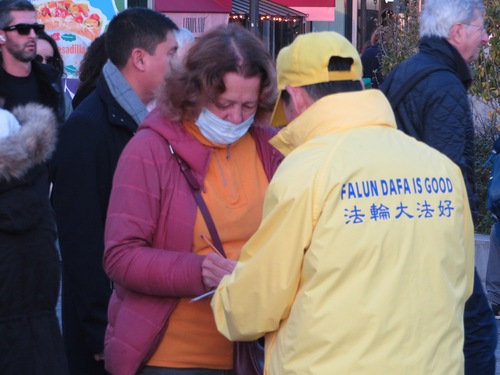 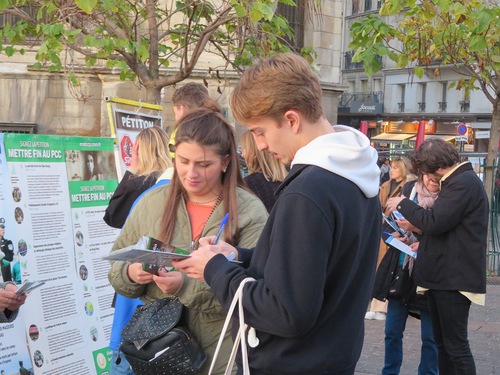 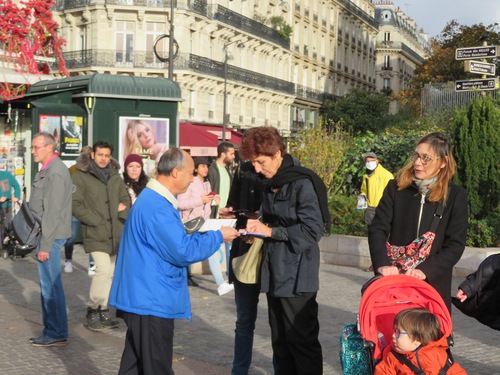 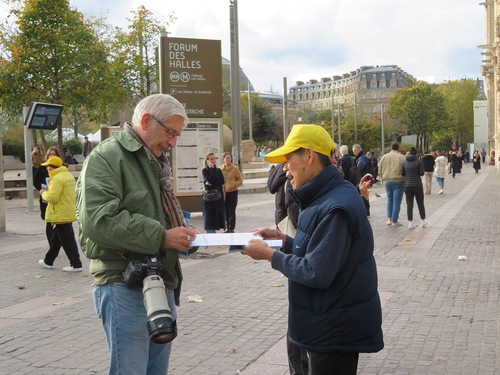 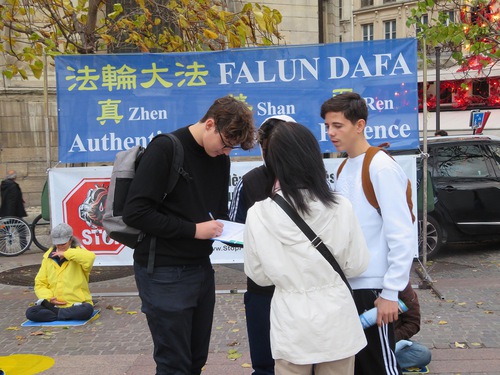 Ms. Liu, who is Chinese and lives in Paris, saw the Falun Gong displays, which aroused her emotions. She recalled that, as a child, she was naive. All the children wore red scarves after they joined the Communist Young Pioneers, and so did she. “This is kidnapping,” she said. “Later, when I was in middle school, I didn’t want to do anything against my will. I refused to join the Youth League, one of the CCP organizations, and I was discriminated against for that.”

Ms. Liu admires people who practice Falun Dafa. She said, “They have a firm belief, they want to be kind. To be kind is the noblest thing. Different from animals, humans have spiritual pursuits, and their minds must be nourished.

“The practitioners are firm in their belief, which is fostered by the principles of Truthfulness, Compassion, and Forbearance. This belief is not only good for themselves, but also for society and mankind. And they do not hesitate to clarify the truth to people in Chinese society. Among China’s population of more than one billion, Falun Dafa practitioners are the only ones who dare to tell the truth. They have persisted for so many years, and it is really not easy. I think we should do this, otherwise no one will know. China is like a big prison, and its people are being controlled and monitored, which is very inhumane.”

After being told more about Falun Gong, Ms. Liu said, “Why persecute these people? How cruel! It is no longer something that humans do but the devil. This is something only the devil would do. It is very cruel. I admire Falun Dafa practitioners.”

She explained that China was an “invisible prison” that is as cruel as a real one. People are brainwashed and indoctrinated by the Communist Party from the time they are children getting a terrorist education. The Party culture infiltrates society and makes people fearful. This subconscious fear, she said, makes it impossible for people to be free or liberated. People who want to be free have to rely on themselves and believe in a force stronger than the CCP.

Ms. Liu said that quitting the CCP was a good way to do that. In fact, it is a process of self-liberation and getting rid of the terror perpetrated by the CCP.

Supporting Falun Gong Is Helping Ourselves

Jean Laurent is a therapist and karate teacher. When he learned that Falun Gong practitioners in China are brutally persecuted and even subjected to the CCP’s organ harvesting while still alive, he said with tears in his eyes, “They—the CCP—are strangling human beings and doing everything they can to harm people who strive to be good. The CCP is not human—it is a despicable and shameless beast!”

He thanked the practitioners for showing people a way to keep healthy.

Natan is an economist. After signing the petition, he said, “The CCP is a dictatorship, and people cannot say what they want. This is unacceptable. Freedom of speech is a basic right.”

“I sincerely hope that the situation will get better,” he said, “and that the people in China will one day also have freedom.” 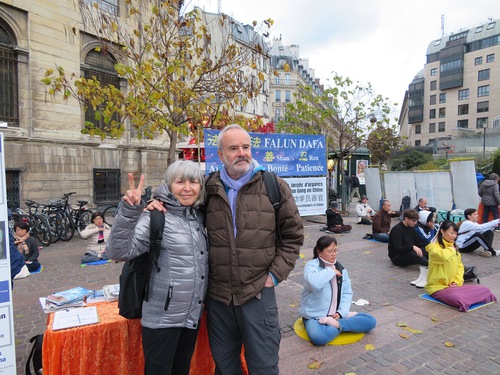 Julie, a retired math teacher, used to practice Falun Dafa and has supported it for more than 10 years. She said, “Westerners need to understand that supporting Falun Dafa is helping oneself.”

Perez Hervé said, “Truthfulness, Compassion, and Forbearance are beautiful values—they are good qualities that one should follow.”

Under Jiang’s personal direction, the CCP established the 610 Office, an extralegal security organization with the power to override the police and judicial systems and whose sole function is to carry out the persecution of Falun Gong.

“Canberra, Australia: Rally Calls to End the Persecution of Falun Dafa in China”