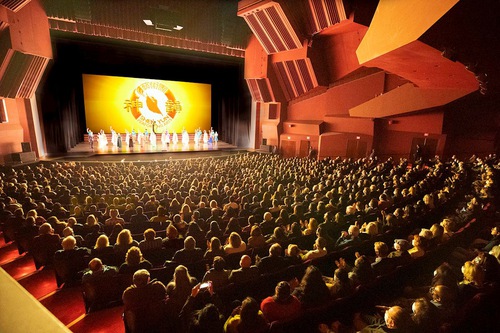 The Shen Yun International Company at the Segerstrom Center for the Arts in Costa Mesa, California, on December 30, 2021. The company presented four sold-out performances in Costa Mesa from December 30–January 1, 2022. (The Epoch Times) 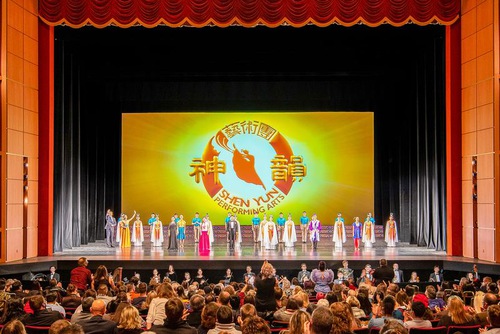 The Shen Yun New Era Company at the Marcus Performing Arts Center in Milwaukee, Wisconsin, on December 31, 2021. The company presented four performances in Milwaukee from December 31–January 2, 2022. (The Epoch Times) 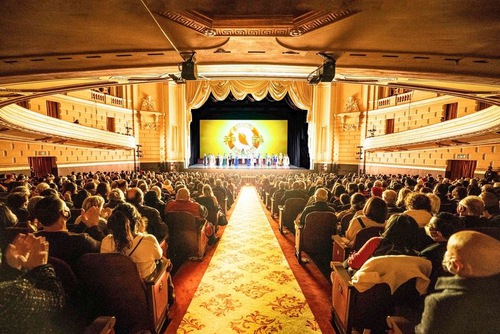 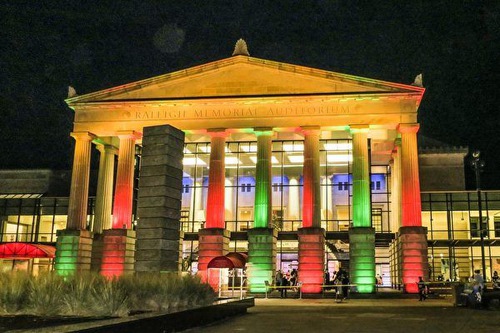 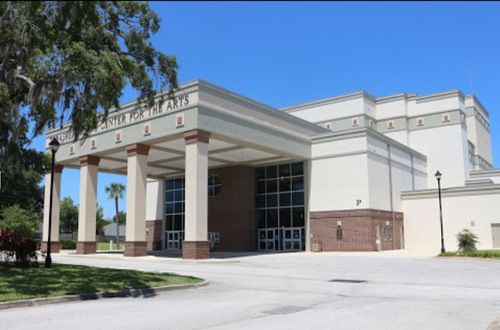 “Enacting the Spirit of Recovery, Renewal, and Reawakening” 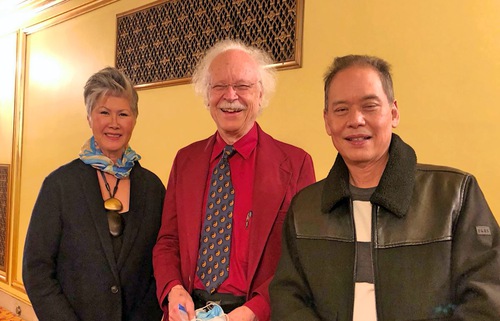 “Very much we need to become more concerned about each other, and the happiness that we can bring into each other’s lives, very significant,” Mr. Havach remarked after the performance.

“I think Shen Yun is doing that. It’s exemplifying; it’s animating; it’s enacting the spirit of recovery, of renewal, and of finally the reawakening of each other,” he said.

“The Real Spirit of China” 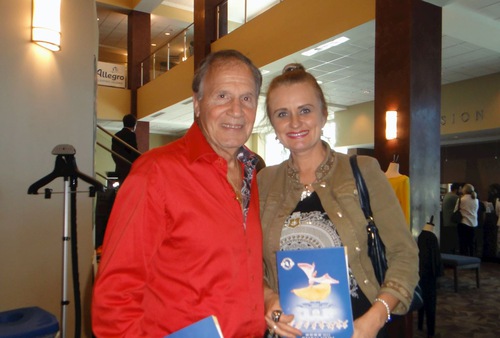 Matteo and Violeta Cucchiara at the Shen Yun performance in Jacksonville/Orange Park, Florida, on January 2. (The Epoch Times)

“You forget about all your problems and just enjoy. You know that there are other problems much bigger than yours and they’re being taken care of and everything is going to work out in the end. And then, you know, it’s a beautiful story,” he added.

The costumes were incredible, Matteo said. “The person who designed everything, the people behind the scenes have to be brought forward... because the beauty is just amazing.”

“I love it... everything. I can feel the spirits of all dancers and [the messages the dances are portraying],” Violeta said.

“Actually, I was in China many years ago... but I have never seen anything so beautiful like this,” she said.

Matteo agreed. “I also remember China from when I was young and... how different it was. It would be nice if they could go back to those traditions and the culture [brought] back. And the persecution [of the spiritual group Falun Gong] stopped,” he said.

“That’s very important and I think one of the things [Shen Yun] brings out is the real spirit of China. We don’t want to think about what’s going on over there and all of the bad publicity that China’s been getting. The people are wonderful and that’s the most important thing... [In Shen Yun, we see] the real people of China... the culture and how beautiful it really is,” he said.

Watching Shen Yun and its performers “makes me feel so good,” Violeta said.

“When I Walked Out of There, the Pain Was Not There” 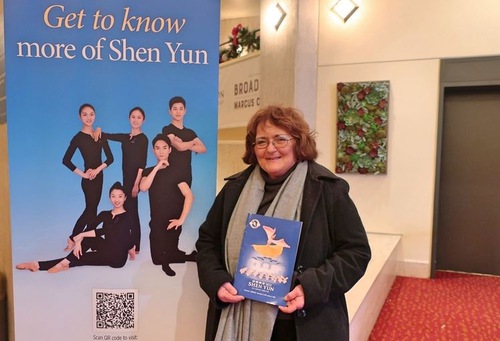 Diane Richter at the Shen Yun performance in Milwaukee, Wisconsin, on January 2. (The Epoch Times)

Diane Richter saw Shen Yun on January 2 in Milwaukee, Wisconsin, where she experienced for the first time in 49 years the disappearance of pain and stiffness in her body.

Ms. Richter is retired but works at a school as a caregiver “taking care of the little angels.”

“I came in with stiffness in my body and my neck, and I don’t know how to explain this but it’s gone. It’s like through the time of watching [Shen Yun], it actually released and it’s not painful right now,” Ms. Richter said.

“It was so inspiring and calming. You could tell that [the performers] were dancing from their heart,” she said.

Her chance to see Shen Yun came when her daughter bought her tickets for Christmas.

“I’ve been talking about wanting to see this for years. And I never dreamed that I would be able to come to see it. And I opened the present and there it was—the most beautiful gift you could ask for.

“And to sit in that chair and just forget any problems that I have, and watch the beautiful movements on stage was so relaxing that when I walked out of there, the pain was not there, the stiffness in the back was not there... It’s amazing,” she said.

“It was by the power of watching [the performers] and releasing... daily problems,” Ms. Richter said as the only way she could explain the disappearance of her pain.

Shen Yun is very educational and everyone should see it, she added.

“So I would encourage people—it’s not just entertaining, it’s learning... It’s not just dancing. Each segment has a story to tell, which was awesome,” she said.

“Audiences Around the World Can Appreciate” 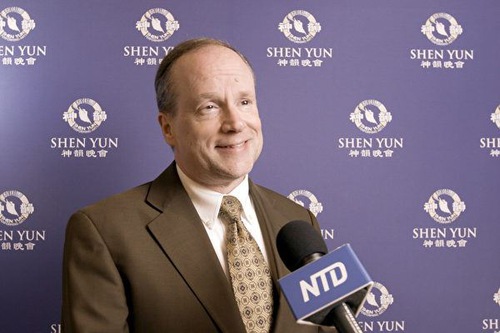 Mr. Hood took notice of Shen Yun's efforts to uphold tradition and expressed his support for their work.

“Tradition is really the sum total of the human experience. It’s what people have learned over the course of generations of time, proving certain kinds of practices or beliefs or values to be useful.

“There’s a famous writer that calls tradition the democracy of the dead. The idea being that people who’ve lived in the past were no less intelligent, no less wise, no less experienced than we are,” he said.

He also spoke about the tragedy of communism when it tries to change or eliminate tradition.

“What happens with communism, or other kinds of ideologies that try to sweep away tradition is essentially you’re throwing knowledge into the ocean. You’re just dumping it away... We always have a lot to learn from tradition, and when systems have fought, whether it be communism or fascism or other kinds of modern ideologies attempt to sweep away all of the wisdom of the past, it leaves everyone ignorant,” he said.

“It’s very obvious that the different pieces that I’ve seen are influenced by traditional religious beliefs. You can see how the Daoists concepts, the Buddhist concepts, and the other kinds of traditions are interwoven into the story, and I think that’s something that audiences around the world can appreciate,” he said.

He also expressed his appreciation for the live orchestra and the lively music of the production.

“I always like to see dance performances with live orchestras. It gives so much more meaning and power to a performance. What I particularly find interesting about this performance is the obvious mixture of Western instruments, Chinese instruments, Western musical style, Chinese musical style. It creates a sum that is greater than the parts.

He also elaborated on the role that music plays in life as well as in the performance.

Mr. Hood was also highly impressed by the dancers. As a tap dance teacher who also has experience in ballet, the difference that he saw in classical Chinese dance was fascinating to him.

“I’m just fascinated with the techniques. Some of it is similar to the Western ballet that I’ve studied in the past, and some of it is very different, particularly the arm movements. And so I just loved the performance,” he said.

“Such a Positive Energy” 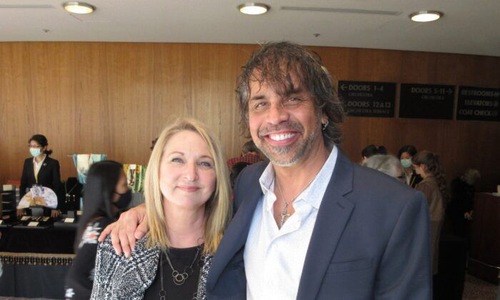 Johnnie Hernandez and friend at the Shen Yun performance in Costa Mesa, California, on January 1. (The Epoch Times)

To Mr. Hernandez, Shen Yun provides inspiration at a time that normal life has been disrupted by the pandemic and shutdowns.

“[Shen Yun] is about faith, it’s about inspiration, about coming together,” he said.

“It’s nice seeing people get out, and it shows you that people can go out, follow certain rules, and we can be safe and do social things again.

“They’re so talented. The colors are so beautiful, they’re so bright. The men and women were so stunning... The talent and all the things they have to remember, and all the moves, it’s just spectacular.

“You can’t help but feel good and be inspired by every single dance that they’re doing... It’s such a positive energy,” Mr. Hernandez said.

“A Great Message of Strength and Hope” 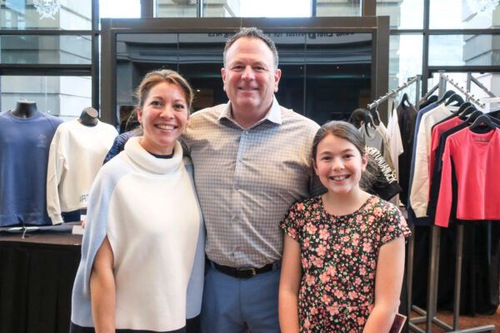 The Daly family (L-R), Tina, Patric, and Reagan, at the Shen Yun performance in Raleigh, North Carolina, on January 1. (The Epoch Times)

Patric Daly, an executive in the healthcare industry, saw Shen Yun with his wife Tina and daughter Reagan in Raleigh, North Carolina, on January 1.

“It was a great message of strength and hope... It’s a fine line between being too critical, but actually showing the history. I think they did a nice job with that. Very good job,” Mr. Daly said.

“I think it shows a diverse culture, so it’s not only about order and discipline, but it’s about individuality in the different regions of the country, as well as an expression of their faith without persecution,” he said.

The Water Sleeves dance amazed Tina. “It just was very symbolic to water and movement, and it was amazing when they all work together, doing it all at the same time,” she said.

“How Beautiful the Country Really Is” 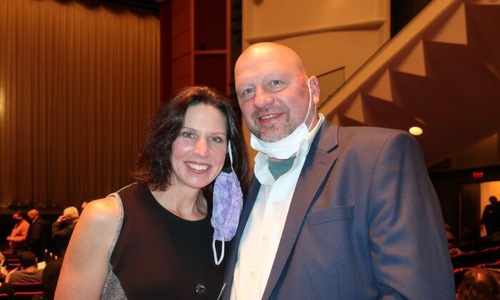 Jeff Pace and his wife at the Shen Yun performance in Milwaukee, Wisconsin, on January 1. (The Epoch Times)

Jeff Pace, the owner of a business that sells architectural building products, and his wife saw Shen Yun in Milwaukee, Wisconsin, on January 1.

“It’s beautiful... The costumes really draw out the story by the movements and the colors. And I love... the synchronicity with [the] background and the dancers appearing on stage. It timed perfectly. The music is beautiful,” Mrs. Pace said.

“I think the traditions are still there—I think they are suppressed right now. I think [Shen Yun] lets everybody know how it used to be and how beautiful the country really is,” he said.

“I find it very, very, heartbreaking to find out that [Shen Yun] cannot perform in China. It is all about the Chinese culture but they can’t perform it in [China itself],” Mrs. Pace said, adding she was grateful that the American people have the freedom to see it.

“We also believe in a higher being,” Mr. Pace said. He said he believes that different cultures present different interpretations.

“I think [Shen Yun] is a beautiful representation of that [higher being],” he said.

Mrs. Pace felt that Shen Yun showed, despite mankind’s suffering, that God was able to bring about a greater good.

“I think people can become reckless in their decisions, thinking that there is no ownership to [their] actions. And to know that you are not alone, that God does not abandon you—he brings about a greater good,” Mrs. Pace said.

At noon on January 5, the Shen Yun Global Company arrived at Germany's Frankfurt Airport for its 2022 Europe tour. The company was received by local fans, who brought flowers and a banner to welcome the performers. (The Epoch Times)