Due to the pandemic, theaters were closed and Shen Yun performances were canceled. Many audience members had already purchased tickets two years ago and were overjoyed to see the world famous show return. After the show, the audience was thrilled and grateful to have experienced the beauty and richness of traditional Chinese culture. Many of the audience members walked out of the theaters feeling uplifted physically and mentally, and some felt the healing effects of watching a Shen Yun performance. 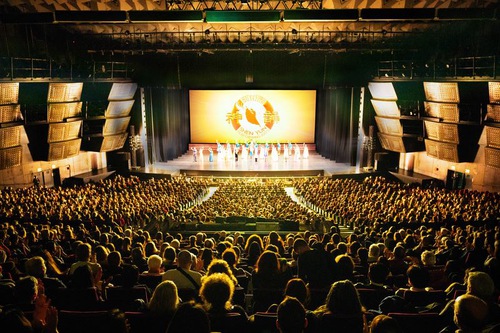 The Shen Yun Global Company at the Palais des Congrès de Paris in Paris, France, on January 16. The company presented four performances in Paris from January 14–16. (The Epoch Times) 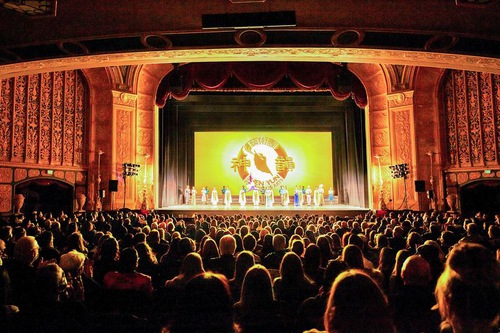 The Shen Yun World Company at the Detroit Opera House in Detroit, Michigan, on January 15. The company presented four performances in Detroit from January 14–16. (The Epoch Times) 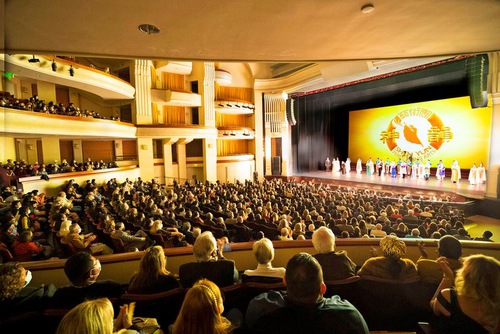 The Shen Yun New York Company at the California Center for the Arts, Escondido, in Escondido, California, on January 15. The company presented six performances in Escondido from January 13–17. (The Epoch Times) 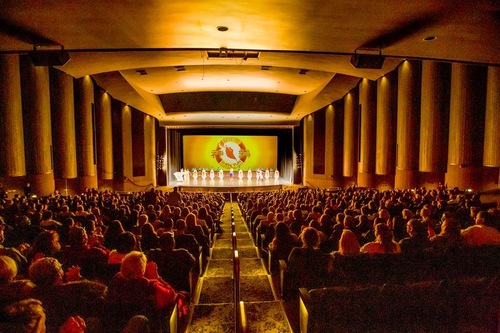 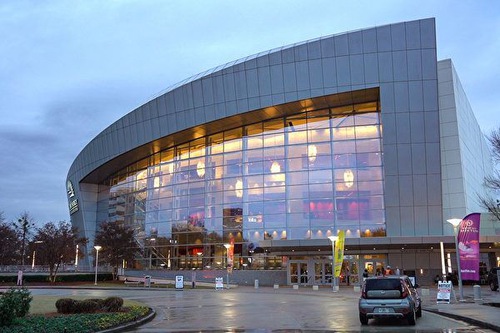 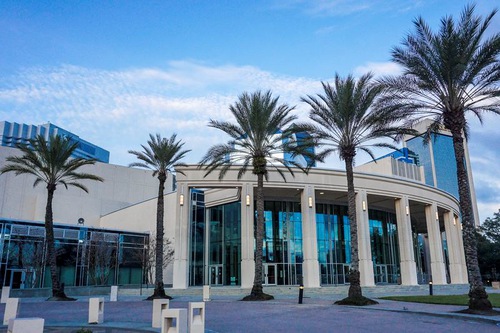 The Shen Yun North America Company presented two performances at the Times-Union Center for the Performing Arts in Jacksonville, Florida, on January 12 and 13.(The Epoch Times) 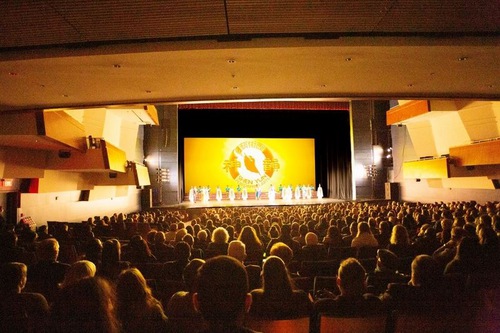 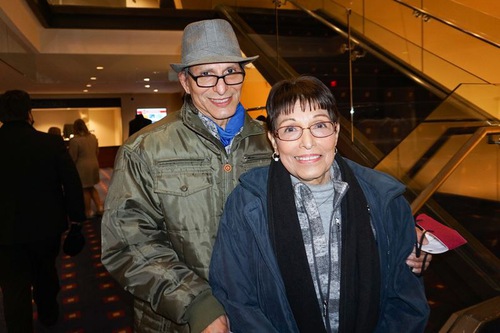 Emily York, the widow of a U.S. serviceman, accompanied by her son Charles Gurunian, attended a Shen Yun performance at the Robinson Performance Hall in Little Rock, Arkansas, on January 15 (The Epoch Times)

“The Show Made Me Forget My Pain”

Emily York, the widow of a military man, has difficulty with her legs and usually takes the elevator to and from her home. On the afternoon of January 15, 2022, she was accompanied by her son and walked steadily down the stairs after attending the Shen Yun performance in Little Rock. She said excitedly, “The actresses on the stage were as light as swallows and as beautiful as a bird. I feel so good after watching a show like this.” 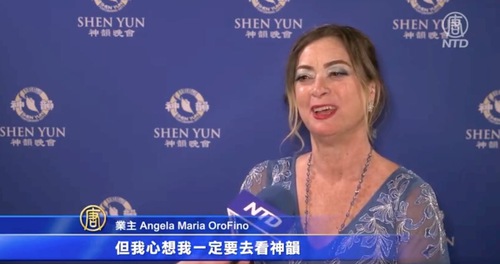 “I was in an accident and I was doing ok, but then all of a sudden, I was just in bed and I couldn’t get out of bed. I said, ‘But I am going to this show,’ ” Ms. Orofino said.

“I was crying last night, for weeks. And the show made me forget my pain. Just made me focus and breathe. Just remember that we’re all one people and we’re all divine. And we’re all worthy of love and light.

“The show reminded me of a lot of my dreams, and what I see in my dreams. The valleys and the rivers.

“The choreography and just the story [of] the second part made me cry. And just the whole spirituality behind it... The vision of peace. And how we’ve been here many times before and we’re returning.

“This whole choreography and story is just what’s going on in our lives and in our universe right now. It’s truly amazing that somebody had that vision to do that as well,” she said.

Owner of a Real Estate Firm: “The Best Thing to Overcome Poor Health and a Sad Spirit” 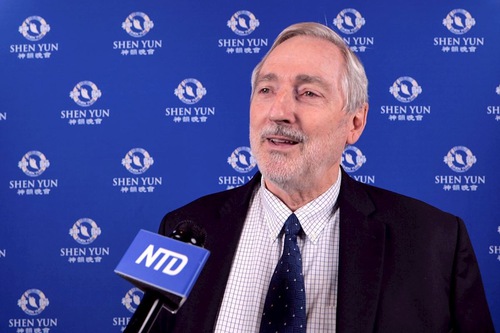 “I think our spirit and our attitude is tied to our physical health... So I think this kind of thing is encouraging and healing for people... If you come and enjoy a show like this, it’s the best thing to overcome poor health and a sad spirit, and I think that will help you fight the pandemic,” Mr. Lancaster said.

Rather than becoming isolated and depressed, he said, “A program like this teaches you that you’re connected to other people and that you need to think about something beyond yourself—something transcendent.”

“When it was over, I told my wife, ‘I could sit through this again right now’... It’s the kind of thing you would never get tired of because it’s so beautiful. The movement, the color, the background, the story. It’s all very impressive.

“Certainly, we’ll be back next year for sure,” he said.

President of RCF Radio: “Come to See it, Whatever the Crisis” 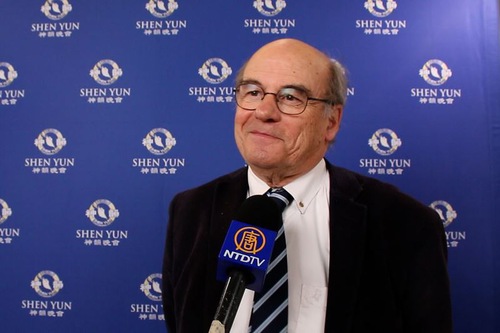 “I think that the COVID crisis must be put aside. We must continue to live and Shen Yun is quite exceptional. We must take advantage of it, come to see it, whatever the crisis,” Mr. Bernard said.

He added that as a Christian, the spiritual side of New York-based Shen Yun resonated with him.

“I noticed that there were quite a few spiritual connotations in the dances and in the texts that are written behind the dances. That’s what touches me particularly because I myself am president of a French-speaking Christian radio station.

He also shared his impression of the performance’s use of a massive digital backdrop.

“The sets are extraordinary and there are little extras that I find exceptional, in particular the back of the stage where you see the characters on a screen and who appear, all of a sudden, on the stage. It’s an entertaining and interesting use of technology,” he said.

Mayor of Paris: “Such Perfection” 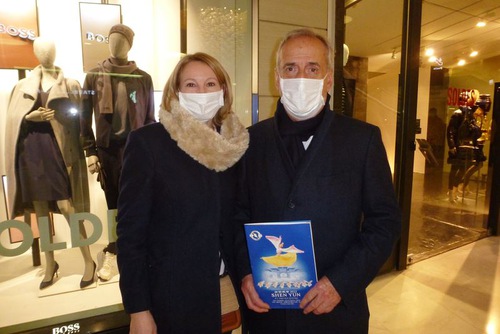 Mayor Jacques Kossowski of Courbevoie and his wife Natacha at the Shen Yun performance in Paris. (The Epoch Times)

Mayor Jacques Kossowski of Courbevoie, a northwestern suburb of Paris, and his wife Natacha saw Shen Yun in Paris on January 15.

Mayor Kossowski praised the high quality of the performance and the excellent skills of the actors, “No single step went wrong. Seeing that their male and female actors are in harmony, I really don’t know how many years of practice it takes to reach this level, 10 years, 20 years? I guess they should start training from an early age to achieve such perfection.”

“I think the only regret is that I heard that the show can’t be staged in China. I think Chinese of all ages will be very welcome. For (Chinese) young people, ‘don’t give up the past, keep the past.’ We are fortunate to have a future, which is given by the past.

“We want to preserve our traditions. Our country exists because of traditions, but this does not hinder development,” he said.

President of a Technical Company: “Bring People Together” 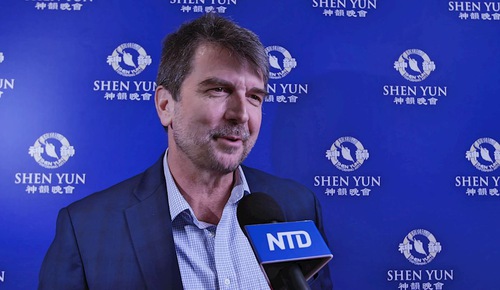 “It was an amazing performance. Really amazing artists, really talented. I’ve really enjoyed it. It was really refreshing to the environment here in Huntsville,” Mr. Russel said.

“The exhilaration that everybody really conveyed and also just pouring out of their... inner soul and their demonstration of their art and what’s inside of them is really amazing.

“It kind of gives you a bigger understanding of what’s going on in the world... Bring people together. We all be looking out for each other and trying to help each other. We all should try to be living in harmony, in peace for sure.

“We’ll be back. We’ll see another one. We’re looking forward to it next time,” Mr. Russell said. 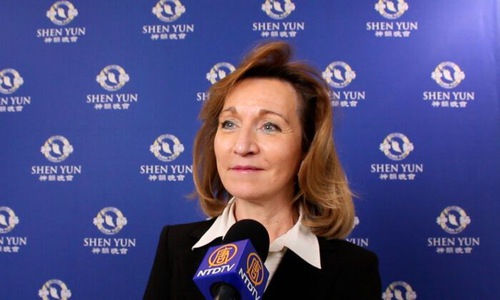 She related to how Shen Yun was reviving traditional Chinese culture and how it gave a full scope to the spiritual traditions that created much of China’s history.

“It is an evocation of otherworldly superior powers, the relationship between earth and heaven,” Dr. Dubois said.

Shen Yun leads to “a reflection on tradition and on bequeathing something through time,” she said.

“Especially in the context that we know, it is good to think that there are sure values, that there are things which are perpetuated... It’s important for each of us not to lose contact with reality on a deeper profound level,” she said.

Artist of a Creative Studio: “So Deep and Beautiful” 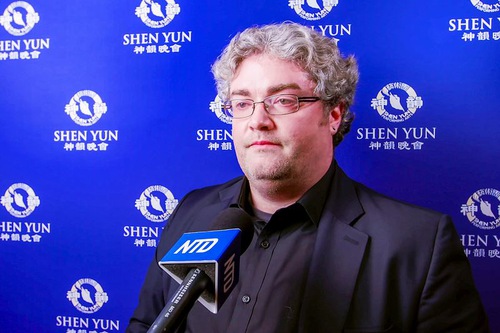 “I’m wishing I had seen it years ago when they first came here... It’s very exciting. I like it a lot,” Mr. Lovette said.

“They’re fantastic. I don’t think I’ve seen anyone quite as masterful at what they do come to this city before. So for me, it’s a real treat. They’re fantastic,” he said.

“Makes me a little teary. Because I agree. I think it’s very excellent... I’ve always enjoyed Chinese culture personally. Even as a little boy, I found it very beautiful. And then you look in communist China, it’s all gray, gray and red, very dead. And I would like to see a free China.

“Obviously I love everything traditional Chinese because I don’t get to see enough of it. And it’s lovely seeing all that.

“I get a little emotional during it, to be honest. I wasn’t expecting it to be so deep and beautiful. I expected it to be fun, but not ‘get you at the heart.’ So for me, it’s kind of an emotional rollercoaster.

“For us, a better view of what it is to actually be Chinese, as opposed to the televised version that we’re given through the communist government. And the beauty of what it can be. And I think lot of, not just Americans, but other people, would love to see that,” he said.

Mr. Lovette would like to say to Shen Yun artists, “You guys are beautiful. And I’m very glad with what you’re doing. So thank you for it.”

Former Official of Department of Homeland Security: “Marvelous” and “Stunning” 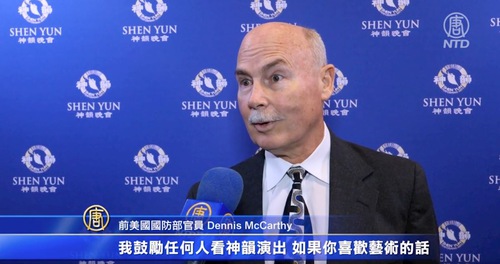 Dennis McCarthy, a former official at the Department of Homeland Security, saw Shen Yun in Jacksonville, Florida, on January 12.

“It was marvelous. It really was. It was a beautiful experience. First time I’ve ever seen anything like this. So I would encourage anyone to see this performance if you like the arts at all,” Mr. McCarthy said.

“I love the music and the dance routines. The costumes, like [my wife] said, were just gorgeous. They’re beautiful, amazing. And the 3D effect really added something to it. It really was quite stunning,” he continued.

Regarding the traditional culture that Shen Yun is trying to restore, he said, “I think it ought to come back. It’s a beautiful culture, and I’ve traveled the world some so I know different cultures.”

“It’s too bad that [China] still isn’t that way. It’s unfortunate the circumstances that they have in their country today. But I think if the people had a choice, that would be what they’d be doing today,” Mr. McCarthy added.

“After Years of Incarceration, Dalian Woman Is Given Second 8-Year Prison Term for Her Faith”