Home > Persecution > Accounts of Persecution
Elderly Woman Tortured During Five-year Prison Term for Refusing to Renounce Practice that Healed Her Illnesses
Jan. 20, 2022 | By a Minghui correspondent in Jilin Province, China

(Minghui.org) The police in Liaoyuan City, Jilin Province, forced their way into a couple’s home and arrested them in July 2014. The elderly husband and wife were later each sentenced to five years for refusing to renounce their faith in Falun Gong, a mind and body practice that’s been persecuted in China for the past 22 years. Ms. Zhang Guixia recently recounted to a Minghui correspondent the various abuses and tortures she suffered in Jilin Province Women’s Prison.

Ms. Zhang, 72, retired from Bureau of Mine in Panzhihua City, Sichuan Province. After she became a Falun Gong practitioner in 1995, her asthma, skin condition, and uterine tumor disappeared in a month. Her husband, Mr. Tian Yifu, 70, is also a retiree of the same agency. His epilepsy disappeared after he took up Falun Gong.

After the persecution started in July 1999, Ms. Zhang went to Beijing to speak up for Falun Gong. The police arrested her and put her in a forced labor camp for a year. Her husband went to Beijing to appeal in May 2000. The police held him in Wanyaoshu Detention Center in Panzhihua City for a month, and fined him 200 yuan. The police frequently harassed the couple and ransacked their home, in an attempt to coerce them into giving up the practice. To avoid the persecution, the couple moved back to their hometown in Liaoyuan City, Jilin Province.

A Dozen Officers Break in and Arrest Elderly Couple from Home

Mr. Tian heard someone knocking on the door, claiming to collect electricity fees on July 31, 2014. As soon as he slightly opened the door, a dozen plainclothes police officers forced their way in. Mr. Tian’s epilepsy relapsed on the spot. The police from Tai’an Police Department ransacked their home and confiscated their valuables without a warrant. The police arrested the couple and put them in Liaoyuan City Detention Center. Some police stayed behind and arrested Mr. Tian’s sister, Ms. Tian Yifeng, when she came to visit a few days later.

The couple appeared in Xi’an District Court on December 11, 2014, with four other practitioners. Their lawyers entered not guilty pleas for them. During the hearing, attorney Zhang Keke asked the bailiffs to remove the handcuffs and shackles from the practitioners, only to be removed from the courtroom himself.

The police also intimidated attorney Zhang at Tai’an Police Department, saying to him, “You dared to plead not guilty (for Falun Gong practitioners).” News that lawyer Zhang was arrested during a trial went viral. Several lawyers and activists immediately published an online statement, demanding his immediate release. The statement soon garnered signatures from 361 lawyers. After six hours of illegal detention, attorney Zhang was released.

The guards in Jilin Province Women’s Prison put each Falun Gong practitioner in an individual cell so that they couldn’t take care of and support each other. The practitioners had to take cold showers, drink unsanitary water, and eat leftovers from other inmates. Twelve inmates were assigned to watch each practitioner. Ms. Zhang had to sit still on a tiny stool that was only 2-inch tall and 2-inch wide from 5 a.m. to 10 p.m. Every day. This put a lot of pressure on her lower back and buttocks and caused excruciating pain. When she refused to watch videos that slandered Falun Gong, the guards kept her from using the toilet and beat her. 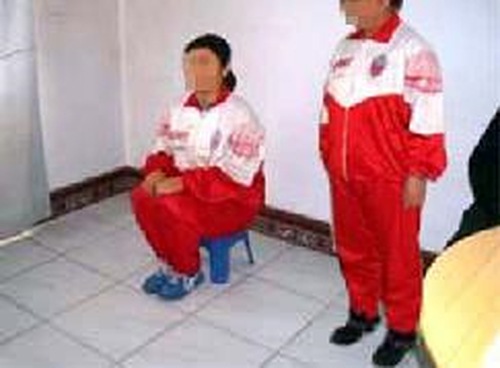 The torture used in the women’s prison caused permanent physical damage to some of the practitioners. Ms. Che Pingping refused to cooperate with the prison authorities, and the guards twice pepper-sprayed her in the face. As a result, the retina of her right eye detached, and she lost her eyesight. Another practitioner, Ms. Jing Fengyun, former head nurse at Siping Hospital in Jilin Province, became completely blind because of the torture. When Ms. Zhang took care of Ms. Jing on August 23, 2017, five guards and six inmates came and beat both of them. They dislocated Ms. Zhang’s collarbone, and she was covered in bruises. She recovered from the injury in two months by doing the Falun Gong exercises.

The guards tried to force Ms. Zhang to write letters to renounce Falun Gong. She refused and shouted “Falun Dafa is good, Truthfulness, Compassion, Forbearance is good” in front of her window. A guard put her in a small cell without windows and had three inmates watch her in January 2018. She slept on the wet ground with a filthy comforter and wasn’t allowed to go outside to use the toilet or wash. She had no access to tissue paper after she relieved herself in the cell, and had to use whatever she could get to clean herself. The prison gave her little food every day, mostly a small piece of rice cake and pickles.

One day the deputy warden came to talk to Ms. Zhang, who responded that she smelled awful and it was better to stay a bit farther away. The warden released her from the cell after 99 days.

When Ms. Zhang was released on July 30, 2019, an agent from the 610 Office in Liaoyuan City came with her second daughter to pick her up.

During the five years when Ms. Zhang and her husband were imprisoned, the local police in Qinhuangdao City (about 400 miles from Liaoyuan) frequently harassed and threatened her second daughter, whose health declined as a result and passed away on July 23, 2021.