(Minghui.org) Today's news from China includes incidents of persecution that took place in 11 cities or counties in 7 provinces, where at least 12 practitioners were recently persecuted for their belief. 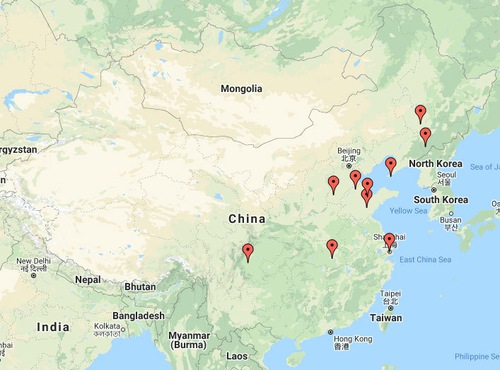 Ms. Guan Yunjuan was arrested on December 1, 2021, by officers from the Lanjia Town Police Station and the Kuancheng District Police Department. Her whereabouts are unknown.

Wu Xuelin, gender unknown, was arrested on the morning of January 6, 2022, after someone reported Wu when he or she talked to people about the persecution of Falun Gong in an open market. Wu is being held at a police station.

Ms. Qian Zujuan was arrested by officers from the Qingling Police Station. She was held for 15 days in the Wuhan Detention Center, and then taken to the Wuhan City Brainwashing Center on January 2, 2022.

Ms. Wang Yuhe was taken to the Liaoning Province Women’s Prison on December 31, 2021.

Xiong Shimei (gender unknown) was arrested and detained on December 7, 2021, after being reported to police.

Ms. Li Wenrui was harassed by village committee members on December 15 and 16, 2021. They ordered her to report to the Xingtai Brainwashing Center, and said they would no longer bother her after that. She did not comply.

Ms. Xu Limin was taken to the Shiquan Police Station at 6:45 p.m. on December 30, 2021. The officers forcibly photographed her and collected her fingerprints, and blood samples.

Ms. Yuan Jinhua and Ms. Cui Yanqin were arrested and taken to the Gucheng Police Station around 10:00 a.m. on January 5, 2022, after someone reported them when they talked to people about the persecution of Falun Gong in the Zhoujiazhuang Open Market. The officers collected their blood samples and fingerprints against their will. When Ms. Yuan did not comply, four officers grabbed one of her arms and pulled it up behind her back. They pinned her legs from behind with their legs, grabbed her other arm, seized her hand, and took her fingerprints and blood samples. The two practitioners were released after 9:00 p.m.

Mr. Cui Hongjun of Yangzishao Town, Huinan County was arrested at home on August 27, 2020, by village Communist Party secretary Li Huihai, village head Xue Laosi, officer Liu Feng’an and others from the local police station. They seized copies of Minghui Weekly and other Falun Gong materials, his identity card, and cash worth over 300 yuan.

They first held him in the police station, and then brought him to the county police department for fingerprints at night. When he did not comply, several officers grabbed his fingers by force. An officer, who looked like he was in twenties, grabbed him by the chin while scolding him.

The officers brought him to the Tonghua City Detention Center on August 28, 2020. They did not follow any legal procedures. Instead they called on their connections and had him detained for 15 days there.

In May 2021, he was repeatedly harassed at home by agents from the town Political and Legal Affairs Committee, town officers, cadres from Henan Village and Heping Village, and clerks from Comprehensive Office.

Ms. Liang Meihua, 73, was sentenced to two years and eight months and fined 5,000 yuan on August 25, 2021. She appealed to the Nanchang City Intermediate Court, which upheld her sentence in mid-December 2021. She has been taken to the Jiangxi Province Women's Prison.