Jilin Teacher Imprisoned Again for Her Faith, Autistic Son and Family in Despair

(Minghui.org) Only two years after a Changchun, Jilin Province, woman finished serving three years for her faith in Falun Gong, she was sentenced to five more years for raising awareness about the persecution of the practice.

Ms. Fu Yanfei and her son

Ms. Fu, 47, was arrested on May 11, 2020, after being reported for talking to people about Falun Gong. The police ransacked her home and confiscated her Falun Gong books and materials. She was held in custody for two days and released on May 13. The police came back several times to harass her.

Less than two months later, Ms. Fu was arrested yet again, on July 7, after being reported for talking to people about Falun Gong in a park. She was first held in the Changchun City Hospital and then transferred to the Changchun City No. 4 Detention Center. For doing the Falun Gong exercises, the guards handcuffed her hands behind her back several times.

The authorities prevented her family from visiting her or sending clothes to her. When her family went to the Chaoyang District Procuratorate to inquire about her case, the prosecutor refused to meet with them and only allowed them to drop off the materials with the security personnel.

Her family learned on January 5, 2021, that she has been sentenced to five years, but further details about her case remain unknown.

Ms. Fu took up Falun Gong in 1997 before graduating from college and many of her ailments soon disappeared.

After the communist regime launched the persecution in 1999, Ms. Fu was detained several times by her employer, the North China Petroleum Education Institute in Cangzhou City, Hebei Province. The authorities also monitored her daily life and reduced her teaching assignments to prevent her from talking to her students about Falun Gong.

In late October 2000, Ms. Fu went to Beijing with six other Falun Gong practitioners to appeal for Falun Gong. They unfurled a banner and called out, “Falun Dafa is a righteous practice” on Tiananmen Square and were arrested.

After they were taken back, Ms. Fu was held in a detention center for a month before being given three years in Kaiping Forced Labor Camp in Tangshan City, Hebei Province. She was tortured in the camp, including being beaten, tied up and hung up, and shocked with electric batons. Her employer fired her. 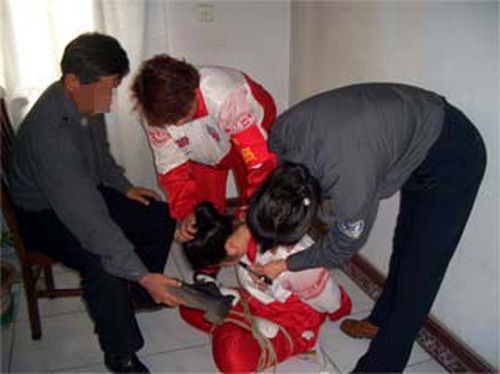 After she was released, she found another job as a high school biology teacher. In 2009, when her son was found to have autism at age 2, Ms. Fu quit her job to spend more time with him.

Ms. Fu was arrested on June 2 and again on November 15, 2014, for talking to people about Falun Gong. She was detained for 15 days the first time and 5 days the second at the Weizigou Detention Center in Changchun.

Her next arrest was on March 14, 2015, for distributing informational materials about Falun Gong. She was held in the Changchun No. 3 Detention Center and sentenced to three years in prison on June 20, 2016.

While she was incarcerated, her son, who was 8 at the time, often woke up crying for his mother. Her husband, who was the sole breadwinner in the family, was under tremendous pressure. Ms. Fu’s own parents, both 74, were also dealt a blow by her absence. Her mother, who has a heart condition and a back problem, fell ill and became incapacitated. Her father, who has a disability, struggled to care for her.

Ms. Fu was transferred from the detention center to the Jilin Province Women’s Prison on August 5, 2016. She refused to wear the inmate’s uniform in protest of the persecution and was tied up on a bed and not allowed to use the restroom for days. She was constipated for days afterward. 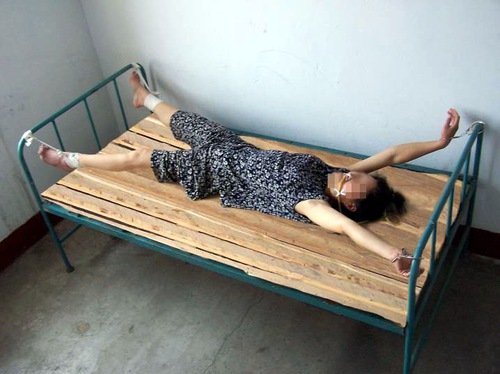 Torture reenactment: Tied up on a bed

Many of the inmates in the prison have gone through training to persecute Falun Gong practitioners. They were given term reductions as an incentive. The guards often threatened to suspend their term reductions if they didn’t keep persecuting the practitioners hard enough.

When Ms. Fu complained to a guard that inmate Weng Li beat her, the guard replied, “What’s wrong with her beating you?” The next day, Weng retaliated by beating her even harder. She also found a helper, named An Haiyan, to bang Ms. Fu’s head against the wall and scrub her mouth with the brush used for the toilet. That afternoon, the two inmates pulled out much of her hair while holding her down on a bed with her hands cuffed.

Ms. Fu shouted, “Stop! You can’t persecute Falun Gong practitioners!” Weng stuffed her mouth with a towel and continued to beat her, causing severe bleeding in her mouth.

On August 16, 2016, Ms. Fu was transferred to Cell 111. One day, inmate Liu Pingping slapped her in the face in a corner that had no surveillance camera and repeatedly pushed her down. Her arms and hands were injured. Liu beat Ms. Fu again on another day and didn't stop until practitioner Jing Fengwei stopped her. Guard Tu Qiang noted her injuries and asked what had happened. Ms. Fu told her about Liu beating her. Guard Tu then moved Liu to a different cell.

Ms. Fu was taken to a strict management cell on the second floor on September 17, 2016. She was subjected to constant beatings and verbal abuse by the inmates. The head inmate, Gong Cuijie, often handcuffed her and didn’t let her leave the cell if she saw Ms. Fu doing the Falun Gong exercises. Inmate Gong Cuijie even threatened to kill her if she didn’t give up the practice.

When Ms. Fu insisted on doing the Falun Gong exercises, guard Gao Yang often handcuffed her and hung her up by her wrists (see image below). Gao wouldn't stop the torture until Ms. Fu went on a hunger strike for several days. When Ms. Fu was not being hung up, other inmates tried to pull her arms down or twisted her arms to stop her from doing the Falun Gong exercises. 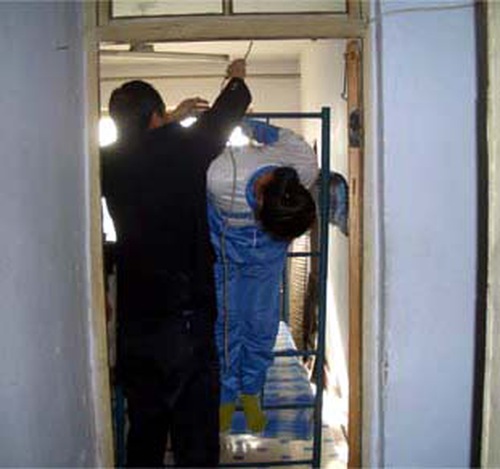 Torture reenactment: being hung up by wrists

Another inmate, Liang Xiaomei, a former Party secretary in an auto company, often beat her and kicked her in the restroom. She threatened to have Ms. Fu’s entire family arrested and detained if she reported the beating to the guards.

Once Imprisoned for Three Years, Jilin Woman Gets Five More Years for Her Faith

“Shanxi Woman in Her 60s Tortured in Prison”

“Do Not Spread Speculation on Social Media”