(Minghui.org) On November 3, 2021, Naz Durakoglu, acting assistant secretary of the Bureau of Legislative Affairs in the U.S. Department of State, sent a response letter to Marco Rubio, a Senator from Florida, expressing concerns for two Florida residents’ family members in China, including Ms. Deng Cuiping and Mr. Zhou Deyong, who are detained for their faith in Falun Gong.

Mr. Zhou was arrested by officers from the Binhai Public Security Bureau and Shengli Oil Field 610 Office at his home in Dongying City, Shandong Province on April 23, 2021. His arrest was approved on May 31 and he is currently held at Binhai Detention Center. His case was submitted to Dongying District Procuratorate on October 29.

The officers at Binhai Public Security Bureau refused to inform Mr. Zhou’s family of his whereabouts for two weeks, and later tried to obstruct Mr. Zhou’s lawyer from visiting him. The lawyer was allowed to meet Mr. Zhou after Gus Bilirakis, representative of Florida’s 12th congressional district, wrote a letter to Chinese Communist Party leader Xi Jinping, expressing his concerns.

After learning of Mr. Zhou’s situation in August, Sen. Rubio wrote to the U.S. Department of State, urging the U.S. government to help free Mr. Zhou and Ms. Deng, a Yunnan Province resident who was sentenced to six years in February 2017.

On November 3, the U.S. Department of State responded to Sen. Rubio. The letter states that the U.S. government has always been very concerned about the Chinese Communist Party’s (CCP) persecution of human rights, and have sanctioned a 610 Office agent this year. The letter also mentioned that the Department of State is very concerned about the CCP’s mistreatment and detention of Mr. Zhou and Ms. Deng, and the government will consider negotiating with the CCP at the right time and urge the CCP to abide by the freedom of religion stipulated in its Constitution. 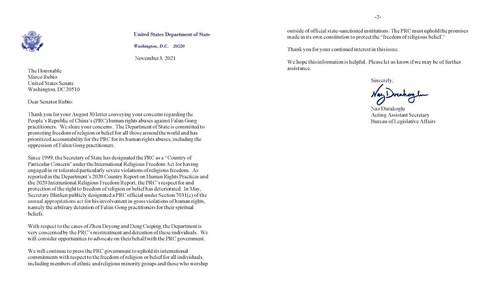 Letter from the U.S. Department of State to Senator Marco Rubio

Below is the letter from U.S. Department of State:

Thank you for your August 30 letter conveying your concerns regarding the People’s Republic of China’s (PRC) human rights abuses against Falun Gong practitioners. We share your concerns. The Department of State is committed to promoting freedom of religion or belief for all those around the world and has prioritized accountability for the PRC for its human rights abuses, including the oppression of Falun Gong practitioners.

Since 1999, the Secretary of State has designated the PRC as a “Country of Particular Concern” under the International Religious Freedom Act for having engaged in or tolerated particularly severe violations of religious freedom. As reported in the Department’s 2020 Country Report on Human Rights Practices and the 2020 International Religious Freedom Report, the PRC’s respect for and protection of the right to freedom of religion or belief has deteriorated. In May, Secretary Blinken publicly designated a PRC official under Section 7031(c) of the annual appropriations act for his involvement in gross violations of human rights, namely the arbitrary detention of Falun Gong practitioners for their spiritual beliefs.

With respect to the cases of Zhou Deyong and Deng Cuiping, the Department is very concerned by the PRC’s mistreatment and detention of these individuals. We will consider opportunities to advocate on their behalf with the PRC government.

We will continue to press the PRC government to uphold its international commitments with respect to the freedom of religion or belief for all individuals, including members of ethnic and religious minority groups and those who worship outside of official state-sanctioned institutions. The PRC must uphold the promises made in its own constitution to protect the “freedom of religious belief.”

Thank you for your continued interest in this issue.

We hope this information is helpful. Please let us know if we may be of further assistance.