(Minghui.org) Marco Rubio, a senior Senator from Florida, wrote to the U.S. Secretary of State on August 30, calling to end the persecution of Falun Gong in China. In the letter addressed to Antony Blinken, Rubio urged the U.S to help free practitioners detained in Chinese prisons and detention centers, including family members of two Florida residents. 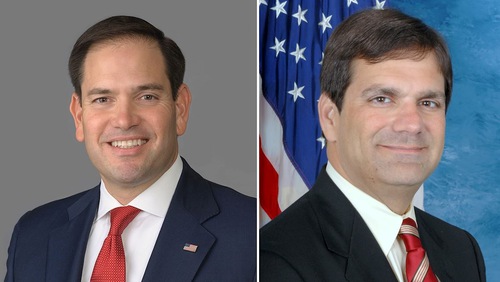 Both letters mentioned Mr. Zhou Deyong, an engineer from Shengli Oil Field in Shandong Province. “It’s really unforgivable some of the things the Chinese Communist Party has done to these wonderful people,” Bilirakis said in an interview. “This just should not happen anymore, and it has... We’re not going to back down, and we’re not going to be intimidated by the Chinese Communist Party.” 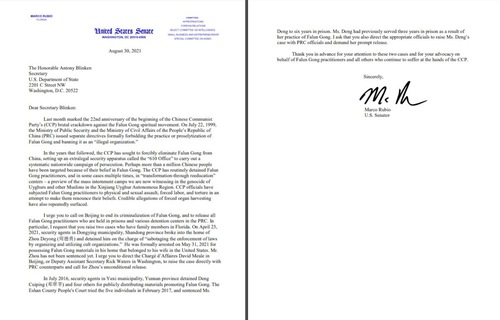 Below is the letter from Sen. Rubio:

Last month marked the 22nd anniversary of the beginning of the Chinese Communist Party’s (CCP) brutal crackdown against the Falun Gong spiritual movement. On July 22, 1999, the Ministry of Public Security and the Ministry of Civil Affairs of the People’s Republic of China (PRC) issued separate directives formally forbidding the practice or proselytization of Falun Gong and banning it as an ‘illegal organization.’

In the years that followed, the CCP has sought to forcibly eliminate Falun Gong from China, setting up an extralegal security apparatus called the ‘610 Office’ to carry out a systematic nationwide campaign of persecution. Perhaps more than a million Chinese people have been targeted because of their belief in Falun Gong. The CCP has routinely detained Falun Gong practitioners, and in some cases multiple times, in ‘transforming-through reeducation’ centers – a preview of the mass internment camps we are now witnessing in the genocide of Uyghurs and other Muslims in Xinjiang Uyghur Autonomous Region. CCP officials have subjected Falun Gong practitioners to physical and sexual assault, forced labor, and torture in an attempt to make them renounce their beliefs. Credible allegations of forced organ harvesting have also repeatedly surfaced.

I urge you to call on Beijing to end its criminalization of Falun Gong, and to release all Falun Gong practitioners who are held in prisons and various detention centers in the PRC. In particular, I request that you raise two cases who have family members in Florida. On April 23, 2021, security agents in Dongying municipality, Shandong Province broke into the home of Zhou Deyong (周德勇) and detained him on the charge of ‘sabotaging the enforcement of laws by organizing and utilizing cult organization.’ He was formally arrested on May 31, 2021 for possessing Falun Gong materials in his home that belonged to his wife in the United States. Mr. Zhou has not been sentenced yet. I urge you to direct the Chargé d'Affaires David Meale in Beijing, or Deputy Assistant Secretary Rick Waters in Washington, to raise the case directly with PRC counterparts and call for Zhou’s unconditional release.

In July 2016, security agents in Yuxi municipality, Yunnan province detained Deng Cuiping (邓翠苹) and four others for publicly distributing materials promoting Falun Gong. The Eshan County People’s Court tried the five individuals in February 2017, and sentenced Ms. Deng to six years in prison. Ms. Deng had previously served three years in prison as a result of her practice of Falun Gong. I ask that you also direct the appropriate officials to raise Ms. Deng’s case with PRC officials and demand her prompt release.

Thank you in advance for your attention to these two cases and for your advocacy on behalf of Falun Gong practitioners and all others who continue to suffer at the hands of the CCP.

Mr. Zhou’s wife, Ms. You Ling, is a resident of Tampa, Florida. She said her husband is a senior engineer and a key technical lead of his employer, Shengli Oilfield in Shandong Province. He was arrested at home in Dongying City on April 23 earlier this year, and the police did not show an arrest or search warrant throughout the process. During the home raid, over 100 copies of Falun Gong books and materials were confiscated. Ms. You said these were her and her husband’s personal belongings.

Mr. Zhou is now kept at Binhai Detention Center in Dongying, “I still do not know why my husband was arrested – and he probably does not know either,” Ms. You explained. “In fact, because I am a Falun Gong practitioner, those confiscated materials belong to me too.”

The family learned that the police had submitted Mr. Zhou’s case twice to Dongying Procuratorate. Ms. You said she is very worried about her husband’s safety.

Mr. Zhou was one of more than ten local practitioners arrested on April 23.

“Disabled During Previous Prison Term, Jilin Woman Gets Another 6.5 Years for Her Faith”