(Minghui.org) On December 7, three days before Human Rights Day, Falun Dafa practitioners in Toronto gathered on Nathan Phillips Square at Toronto’s City Hall to urge the Canadian government to bring up the persecution of Falun Dafa during the Summit for Democracy, December 9 - 10. Practitioners called for stopping the 22-year-long suppression in China and releasing Canadian citizens’ family members detained in China.

According to the Canadian Falun Dafa Association, a list of 150 Chinese Communist Party (CCP) officials and nearly 300 pages of supporting documents were submitted to the Canadian Minister of Foreign Affairs, describing the human rights violations carried out by these officials against Falun Dafa practitioners.

Twelve family members of Canadian residents are currently held in Chinese prisons and other detention facilities. Among them is Ms. Liu Yan, who was arrested in Yunnan Province in late September. 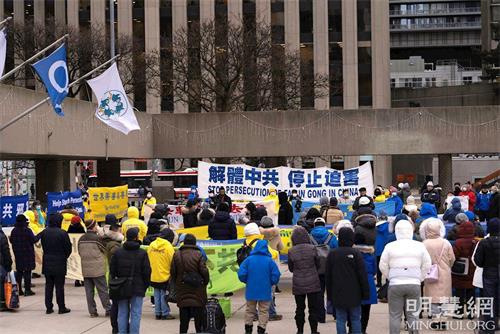 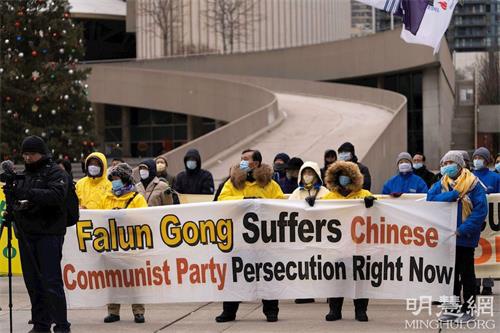 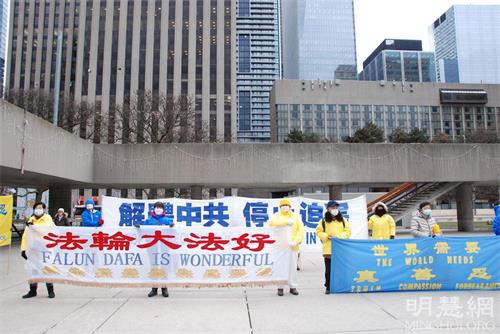 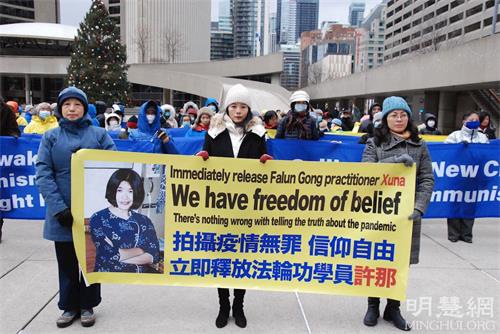 Practitioners held a rally at Toronto City Hall on December 7, 2021 in advance of Human Right Day. 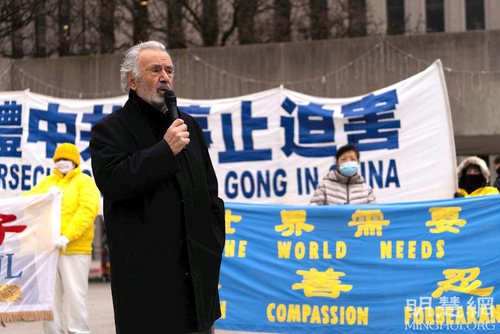 “We need to make our voices loud and clear, to tell the CCP that human rights violations are unacceptable,” said former Canadian Senator Consiglio Di Nino. “For many years, the CCP seems to have ignored such voices from the world.” He explained that is why he specifically came to this rally to support Falun Dafa practitioners.

Senator Di Nino said, “This event to call attention to Human Rights Day is especially important. It is a reminder for the CCP, as well as residents of Toronto and around the world, that we will not stop such efforts until freedom is secured globally.”

Countering Communism Is Our Responsibility 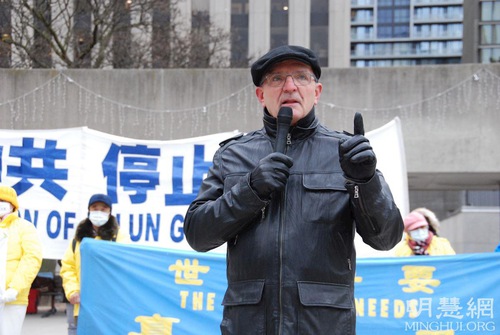 As the first Polish-born Parliament Member in Canada, Wladyslaw Lizon recalled how communist rule damaged the rule of law and harmed the people of Poland. “Several decades have passed, but communism’s nature remains the same. That is, it constantly suppresses people and deprives people of their freedom. It is our responsibility – us people in the free society – to oppose such oppression,” he said.

Mr. Lizon said he remembers how the Polish Communist Party directed the military and the armed police to suppress peaceful citizens. “Right now, a similar tragedy is happening to the Chinese people. Fortunately, Poland and other countries in Europe passed that stage and have begun to enjoy freedom.” Mr. Lizon hopes that people in China can do the same and gain basic human rights.

“For people who live in the free world, we need to support everyone who is suppressed,” he declared. He also hopes that the Canadian government will continue to raise the issue with the CCP, including calling for the release of detained Falun Dafa practitioners. He reiterated that people in Western society are obliged to counter totalitarian regimes. 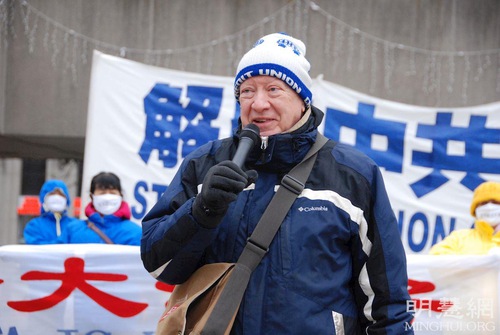 Every time he passes by the Chinese Consulate, he sees Falun Dafa practitioners’ peaceful protest, explained Michael Stainton, President of the Taiwanese Human Rights Association of Canada. He said that is why he feels it’s important to participate in the December 7 event and remind people of the crimes committed by the CCP. He hopes that Canadians can act on their conscience and pay attention to the persecution in China and Falun Dafa practitioners who are mistreated there.

Mr. Stainton said he respects practitioners for their efforts and hard work to end the persecution. “It’s not easy, but it needs to continue. Many parliament members in Canada are also concerned about human rights and strongly support it,” he said.

“It is important to keep the momentum,” he added. “Although the CCP seems to have been infiltrating Western countries, in the end, freedom and democracy will prevail.” He thanked everyone who has stepped forward for this cause. 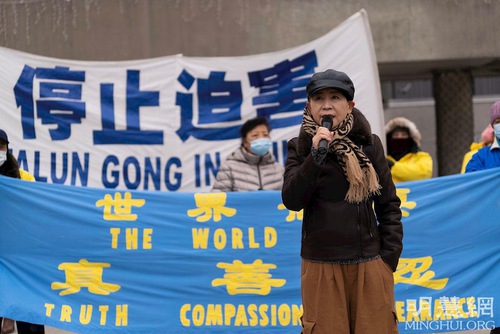 Sheng Xue, Vice President of the Federation for a Democratic China, addressed the rally.

“When the CCP started to suppress peaceful Falun Gong practitioners in July 1999, many people were surprised and confused. But in a short time, practitioners realized what was going on and recognized the vicious nature of the CCP,” explained Sheng Xue, Vice President of the Federation for a Democratic China.

“Since then, practitioners have demonstrated strong faith and perseverance, telling the public the facts about Falun Gong and the bad deeds of the CCP. In the past 20-plus years, Falun Gong practitioners are one of the groups who have done this the best. They have sacrificed tremendously over the past 22 years and have become more and more steadfast,” she said.

Ms. Sheng continued, “Because of this, every practitioner is a hero. We have also seen changes in recent years. More countries, including international leaders and ordinary citizens, have become clear on the CCP’s true nature. Many of them have stepped forward to reveal the [CCP’s] brutality. From this, we have seen inspiration, confidence, and hope.” 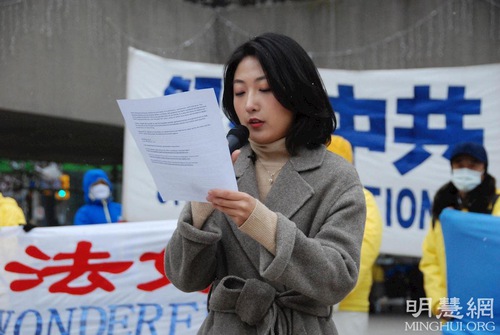 Liu Mingyuan calls for help to rescue her mother detained in China.

Liu Mingyuan, majoring in animation at Sheridan College, said that her mother Ms. Liu Yan was arrested in late September for her belief in Falun Gong. Mingyuan hopes the Canadian government can help secure her release.

Ms. Liu Yan was a former Air Force English teacher. The persecution not only led to Ms. Liu’s detention and imprisonment, but also deprived her of employment numerous times. The ongoing persecution forced her and her husband to flee from northeast China to Yunnan Province in southwest China. But she lost her job again and was again arrested.

“This is one reason why Human Rights Day is so important and personal,” said Ms. Liu Mingyuan. She hopes that more people can hear her story and learn about what is happening in China, including her mother’s ordeal.

“The persecution of Falun Gong overrules Chinese law,” Ms. Liu continued. “No family members are allowed to visit my mother. The officials barely follow the law in cases related to Falun Gong,” she explained. Ms. Liu’s father has not been allowed to see his wife, and even the lawyer he hired was restricted from meeting with Ms. Liu.

Although she’s no longer in China, Mingyuan has done her best to rescue her mother. She has contacted members of parliament, started an online petition, and has mailed letters to Chinese officials. Several Canadian media reported on the rally held outside the Chinese Consulate last month, where Mingyuan called for help to rescue her mother. Mingyuan has included these reports in a letter and sent it to detention center officials in China. In Canada, several mayors in the Ontario area have read about Mingyuan’s story. Teachers at her college also said they would write letters on her behalf.

“I hope more Canadian citizens and the government will help me rescue my mother, because she and many people like her are continuing to suffer under the CCP’s totalitarian regime right now.”

Falun Dafa (also known as Falun Gong) was first introduced to the public by Mr. Li Hongzhi in Changchun, China in 1992. The spiritual discipline is now practiced in over 100 countries and regions worldwide. Millions of people have embraced the teachings, which are based on the principles of Truthfulness, Compassion, and Forbearance, and learned the five gentle exercises, and have experienced uplifted health and well-being.

There is concrete evidence that the CCP sanctions the harvesting of organs from detained practitioners, who are murdered on demand to supply the organ transplant industry.

“Correcting My Behavior Around My Family by Cultivating Diligently”

“How Fortunate I Am to Be a Falun Dafa Practitioner”