(Minghui.org) Falun Dafa practitioners in Quito held activities on the morning of October 17, 2021. They demonstrated the Falun Dafa exercises and distributed Spanish language flyers with information about the spiritual discipline. They also collected signatures on a petition calling for an immediate stop to the Chinese Communist Party’s (CCP) persecution, especially the state-sanctioned forced organ harvesting from practitioners while they are still alive.

Quito, the capital city of Ecuador, is located in the northern highlands of the Andes mountains. Quito was built on the remains of an ancient Inca city and is renowned for its historic 16th and 17th-century buildings. 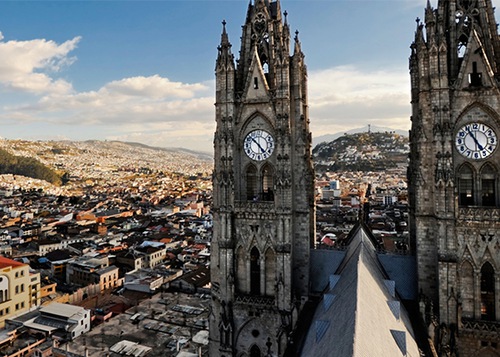 One practitioner, who is over 70 years old and recently began practicing, said, “We are human beings. Every one of us has the right to do things that are suitable for us.” She is very thankful for being able to learn Falun Dafa and hopes that more people can benefit from it too.

Due to the gloomy weather, fewer people were passing by the Quito practice site that day. However, many residents already knew about the persecution and understood the truth. Passersby signed the petition to call for an end to the persecution.

One young woman talked with a practitioner in fluent Chinese as she signed the petition. She explained that her husband is Chinese. A singer not only signed her name, but asked for more flyers to share with friends and family.

By the time the event ended that afternoon, most people who passed by the practice site had signed the petition.

Falun Dafa (also known as Falun Gong) was first introduced to the public by Mr. Li Hongzhi in Changchun, China in 1992. The spiritual discipline is now practiced in over 100 countries and regions worldwide. Millions of people have embraced the teachings--which are based on the principles of Truthfulness, Compassion, Forbearance--and learned the five exercises have experienced uplifted health and well-being.