(Minghui.org) Shen Yun Performing Arts presented seven performances in three U.S. states during the week of October 13–17, 2021. Audiences in Montana, Massachusetts, and Oregon expressed appreciation for not only the company’s artistic mastery, but its ability to present the divine on stage. 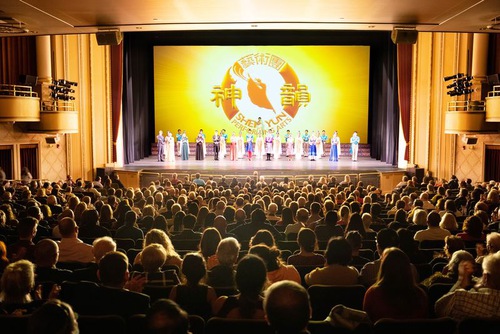 The Shen Yun International Company at The Hanover Theatre in Worcester, Massachusetts, on October 17, 2021 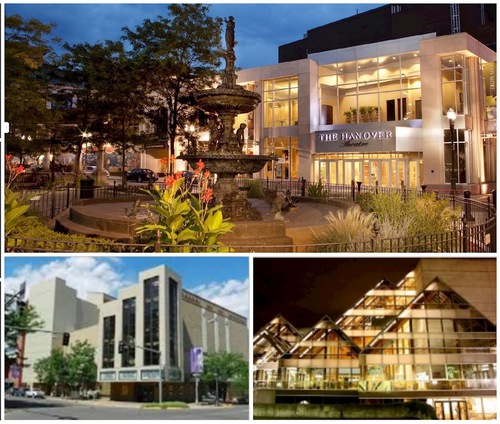 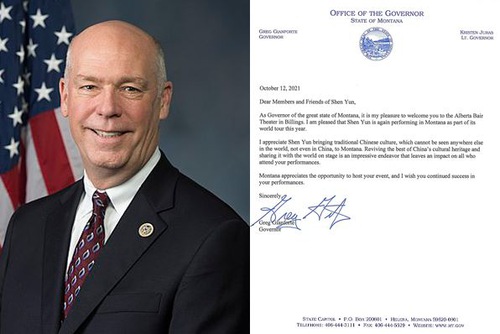 Prior to Shen Yun’s performances in Billings, Montana, Governor Greg Gianforte issued a welcome letter to the company, stating, “Montana appreciates the opportunity to host your event, and I wish you continued success in your performances.” 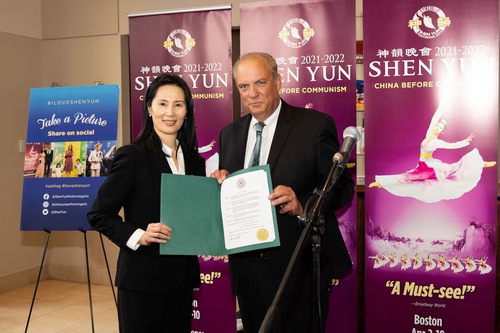 Mayor Joseph M. Petty of Worcester, Massachusetts, came in person to issue a proclamation to company manager Vina Lee at the opening show on October 16, 2021, welcoming the performing arts company. 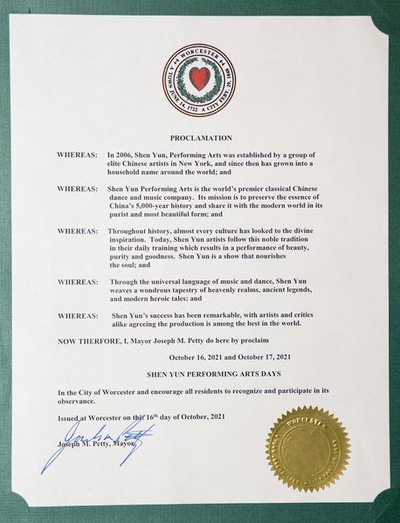 Mayor Joseph M. Petty of Worcester, proclaimed October 16–17, 2021 to be “Shen Yun Performing Arts Days.” He also wrote in the proclamation, “Shen Yun’s success has been remarkable, with artists and critics alike agreeing that the production is among the best in the world.”

“The Richness of Heaven” 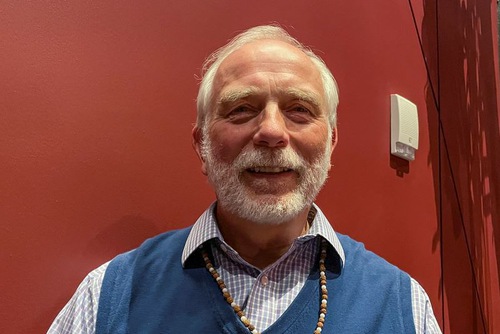 David Lewis, a minister and a composer, traveled to Billings from Livingston, Montana, to see Shen Yun on October 13, 2021.

“I love the performers, they’re phenomenal. This is the best thing I’ve ever been to in my whole life,” he said.

“I’m so happy. I want to tell everybody about it. I’m going to tell everyone I know they have to see this, whether it’s in Montana or another state.

“The music is divine. I love the music,” Mr. Lewis said.

“I believe in reincarnation. I’ve been to China. That brings back ancient memories to my soul that inspires me,” he said.

“This is full of light, full of spirit, full of the richness of heaven. This music is inspiring. I love the Chinese instruments and the collaboration with the Western instruments. It is fantastic,” he said.

“And the visuals, I’ve never seen anything like that, where they come down and then they pop out,” he added of Shen Yun’s patented animated digital backdrop that interacts with the performers. “That is absolutely stunning. That is genius.”

“I hope that this changes our culture in the United States away from darkness and evil,” he said. 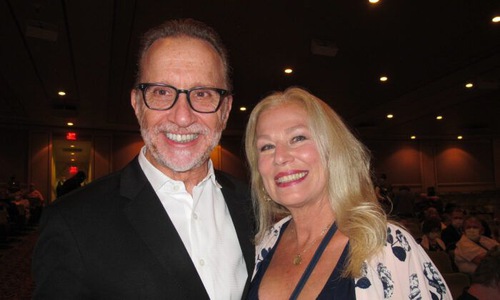 Richard Pelland and Janet Lizotte at The Hanover Theatre

“It was magical,” said Ms. Lizotte, the owner and director of Education Beauty Pros International.

“The colors, how the dancers are all in sync, perfectly synchronized... It’s just so beautiful,” she said.

“The choreography is just exquisite, really... It’s right on point. And even though they make it seem kind of seamless and easy, it has to be very difficult... To do that [together] in such a wonderful way,” he said.

They also spoke about Shen Yun’s mission to showcase the Middle Kingdom’s traditional beliefs, “I think it helps to educate all of us and it gives us the opportunity to appreciate it,” Mr. Pelland said.

“That’s why we’re here. We feel that connection. We honor it and we applaud the values that are part of [China’s] tradition,” Mr. Pelland said.

“They should be most proud of their work,” he said. 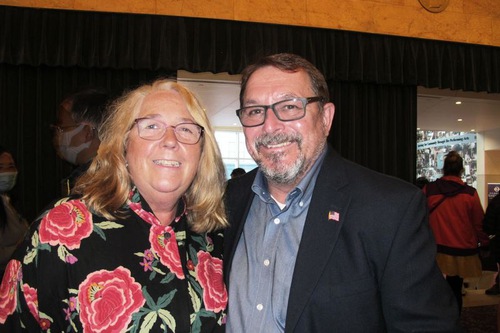 Michael Morgan and his wife Denise at The Hanover Theater.

“I cried the entire show,” Mr. Morgan said. “My feelings of the divine—of course, it’s in all of us—and the strength of it.”

“It’s heartbreaking that they can’t do this in China anymore,” Mrs. Morgan said.

“It’s extremely important that we see more of these shows. One show once a year is not good enough, okay, I need to see it five days a week,” Mr. Morgan said.

“More, and more culture,” he said. “The music is so appropriate. The dancing is fundamental and pure. It’s a fantastic show. We bought our tickets way back in May, and it is not disappointing at all.” 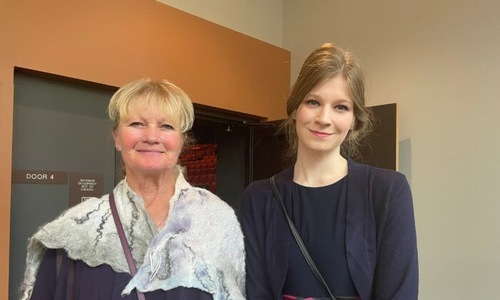 “I don’t even have the words to describe how incredibly extravagant and beautiful it was,” she said. “It was very professional.”

Ms. Olsen is very involved in the creative arts. “I am an artist and a pianist. I am also learning violin... I do a lot of things. I do textiles. I like to knit, crochet, spin. I sew dresses as well,” she said.

“It is absolutely breathtaking. The [musicians] make your feelings come alive. And the traditionalism is just wonderful.

“I love how they join [the two styles of music] together so that it will create just beautiful colors of music. I can see it and feel it,” said Ms. Olsen, who plays the works of Chopin, Mozart, and Beethoven.

“I just loved all the music, all the dancing. I believe that [performances such as Shen Yun] brings out inspiration in people... They bring out feelings that people themselves don’t even understand. And I believe that when people perform, you’re just overcome with feelings and emotions, and you can’t get that in movies, or just listening to it on your headphones,” she said.

“And [the dancers’] skills... Their control, [being able to lift] themselves up into the air and landing—that is insanely impressive, and it’s incredible,” enthused Ms. Olsen. 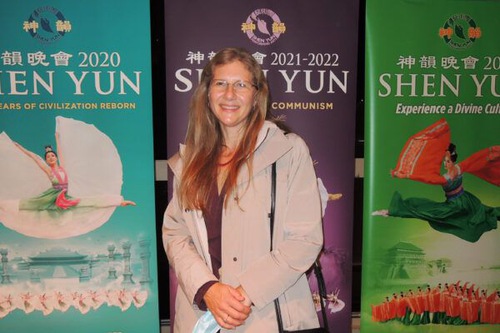 “I just found myself appreciating the... beautiful sense of hope and just enjoying being in that moment and not having to worry about anything else,” Ms. Siegienski said.

She particularly enjoyed the performance by the erhu soloist. “It’s beautiful. I’ve never heard anyone play so beautifully,” she said.

“I’m not sure I could put it into words, I found myself imagining everything,” she continued. “There was so much soul in the music. It was so incredibly expressive. I really don’t have words to describe it.

“I would love to see that performance again several times,” she added, “and I can imagine it would be slightly different with a different kind of soul each time that it is played.”