The Taiwan Association for International Care of Organ Transplants (TAICOT), Korea Association for Ethical Organ Transplants, and Japan’s Stop Medical Genocide (SMG) network organized the poster competition, which attracted entries from artists all over the world. The winning entries were exhibited in the white room of the Nangang Exhibition Center in Beitou, Taipei. 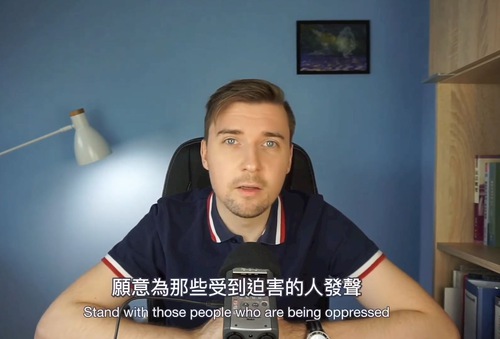 Stan, from the popular Youtube channel “Stan from Poland speaks Chinese,” said in his message to the awards ceremony that he hopes more people will learn about the illegal actions of the CCP through the competition.

The event attracted participants from 70 countries. Many people have been following the human rights violations in China and the regime’s crimes of forced organ harvesting.

Stan, from the popular Youtube channel “Stan from Poland speaks Chinese,” said that everyone knows that the CCP is a criminal organization. He said he hoped that more people would become aware of the illegal actions of the regime through the competition.

Young Doctor Learns about Organ Harvesting Through the Posters

A young doctor who attended the poster exhibition said he had once read a report about a child in China whose cornea was secretly removed. The child kept asking why it was always dark. The doctor was puzzled, “How could something like that happen?” He had the day off work and the poster exhibition venue was nearby, so he decided to come to find out more about China's organ harvesting.

A Falun Gong practitioner who had volunteered to explain the posters to visitors told the doctor that organ harvesting is a lucrative business in China and that CCP officials have betrayed their consciences by participating in these crimes. That’s how the child’s cornea disappeared.

The practitioner also told the doctor that many detained Falun Gong practitioners have been subjected to blood tests when they were detained to see if their blood and tissue type matched those seeking organ transplants. The practitioners could be killed at any time to meet the demand, and their bodies would be cremated while they were still alive to destroy evidence of the crimes.

The poster that won the gold prize depicted hastily done surgical stitches. The doctor said, “This is not a professional, normal operation. It is a trampling of the human body!”

The doctor previously saw a mother and her fetus exhibited in a body exhibition. He wondered who would consent to these bodies being made into specimens for display. After seeing the posters, he finally understood that the body parts were taken without consent from prisoners of conscience in China.

He took some additional information about organ harvesting and said he wanted to tell his friends about it.

Tien Chiu-chin, a member of Taiwan’s Control Yuan, said that the CCP’s crimes of organ harvesting were even more horrifying and brutal than Hitler’s massacre of the Jews.

She said that according to Taiwan law, sources of organs must be clearly known, and there is a registration system. Patients need to wait for a long time for a suitable organ. But if you can get one within 1-2 weeks in China, whether it is a heart, liver, kidney, or lung, doesn’t this imply that there is a huge, living organ bank behind the scenes?

She hopes that more people will learn about the CCP’s crimes of organ harvesting.

Participating in the Competition Is Stopping Organ Harvesting 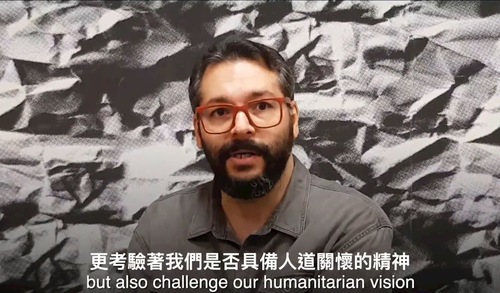 Bahram Gharavi, a graphic designer from Iran, won the gold prize. “I saw the information on the poster competition online,” he said. “The theme was unique, yet shocking. I had never heard of the organs of prisoners of conscience in China being taken without consent and found it inconceivable. Unfortunately, this is state-sanctioned, beyond the scope of an individual or small organization.”

Mo Qilin, a Taiwanese illustrator who took part in the competition, said that he participated in the event because justice and conscience are the most important values for people and humanity. He felt honored to step out and stop the atrocities. He said he hopes the CCP will collapse soon. 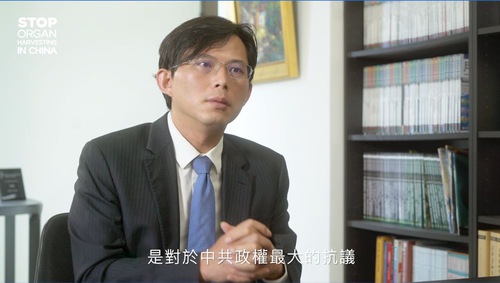 Huang Kuo-chang, member of the Legislative Yuan, said every work shows concern for human rights. It is the greatest protest against the communist regime’s totalitarian rule.

Huang Kuo-chang, a member of the Legislative Yuan, said he heard about organ harvesting ten years ago. He said that every work shows concern for human rights, and is the greatest protest against the communist regime’s totalitarian rule.

“Frankly speaking, I was very, very astonished. This is totally devoid of humanity, not to mention against international human rights treaties. One cannot imagine this continues to take place in the 21st Century,” he said.

He said that all of the perpetrators should be exposed, and he believes justice will prevail. “I believe more and more people will stand up against it bravely,” he said. 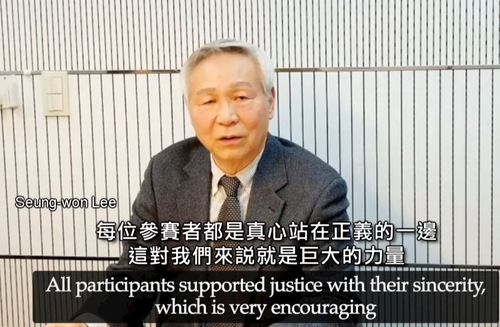 Li Shengyuan, president of the Korea Association for Ethical Organ Transplants said that the competition received more than 1,000 entries. “Whether they won an award or not, every participant sincerely stood on the side of justice. This is a great power fighting against injustice,” he said. 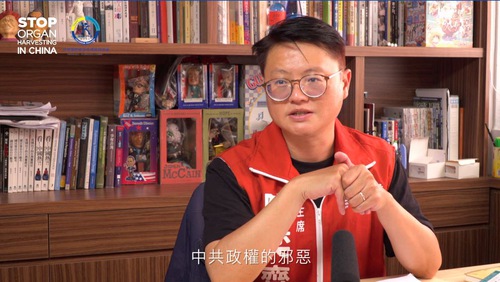 Chen Yi-chi, chairperson of the Taiwan Statebuilding Party, said, “Those who participated in the competition are in fact exposing and letting more people know about the brutalities of the CCP.”

“Designing the poster is helping more people know about the evil nature of the CCP’s rule. You are in fact exposing the regime’s brutalities,” he said. 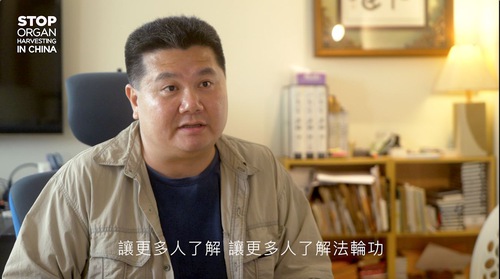 Award-winning Taiwanese documentary filmmaker Kevin Lee called on people not to ignore the CCP’s crimes and instead to stand up to stop the regime’s persecution.

“When we see Tibetans killed by the CCP, the organs of Falun Gong practitioners removed without consent, the Uyghurs locked up in concentration camps, many people feel these things will not happen to them. If we continue to ignore these crimes, such atrocities will continue to spread. If we don’t confront it, then one day it will happen to us.”

“As a designer, your acute thoughts and creations are like righteous arrows penetrating the firewall erected by the CCP,” he said.

Hubert Körper, spokesperson for the China working group of the International Society for Human Rights (IGFM in German), said in a statement that stealing organs is one of the greatest crimes threatening humanity.

He said that according to reliable reports, 60,000 to 100,000 organ transplants are carried out in China annually. Experts say that most of the organs come from political prisoners, and in particular Falun Gong practitioners, Uyghurs, Tibetans, and Christians from family churches.

Körper also said that the final report released by the London Tribunal Courts in June 2019 concluded that the act of killing prisoners of conscience for their organs has been taking place in China for a considerable period of time, and the number of victims is significant. The IGFM thinks the CCP continues to give orders to kill prisoners of conscience on a large scale. A lot of evidence suggests that the CCP has committed genocide and crimes against humanity.

Professor Li Huige, faculty member of the Department of Pharmacology at Johannes Gutenberg University of Mainz in Germany, said that China has been carrying out transplants using organs sourced from innocent prisoners of conscience since the year 2000. This is a crime against humanity. Unfortunately, this is still happening today and has been going on for too long. It is not because the world has been tolerating this for too long, rather it is because people know too little about this. In order to stop this, more people need to know the truth.

Sebastian Brehm, a member of Parliament in Germany, said that forced removal of organs is a shocking and inhuman form of slaughter, and should not be accepted.

He said most of the victims are Falun Gong practitioners.

Since July 1999, millions of Falun Gong practitioners have been wantonly arrested and detained by the CCP in China. Many were tortured and even killed. More than 1,000 hospitals in China now specialize in organ transplant surgeries. The wait for an organ in China is several days, and at most a few weeks, while in other countries, the wait is usually several years.

Brehm said that no one has the right to take one life in exchange for another. The right to live is a universal value and must be protected.

He called on the Chinese regime to respect international standards, abide by the UN’s International Covenants on Civil and Political rights, which it has signed, stop the persecution of Falun Gong immediately, release all detained Falun Gong practitioners and other prisoners of conscience, and stop organ harvesting.

Pocia Wang-Becker, a Taiwanese artist living in Germany, said that the CCP’s forced organ harvesting is a bloody business. He was happy that so many artists have been exposing this through the arts and attracting global attention. He hopes more righteous artists will join in to stop this most severe wrongdoing in the future.

“Master Helped Fulfill My Wish To Save Sentient Beings”