(Minghui.org) “It was the evening of January 30, one week after the Chinese New Year in 2001—cold, dark, and quiet in the labor camp. I suddenly heard the sound of leather boots stomping on the concrete floor. As the footsteps got closer, I heard the sound of keys. Then the metal door [of my cell] opened with a loud ‘bang,’ followed by a guard yelling, ‘Lin Shenli, get out here!’”

The above was related by 66-year-old Lin Shenli, who said, “It wasn't a scene out of a horror movie, but a reality we faced every day in the labor camp. I knew they were trying to brainwash me into renouncing my faith in Falun Gong.”

Mr. Lin is a native of Shanghai. In the early 1990s, he went to Japan and managed his own businesses, including a restaurant and a clinic. After returning to China, he worked for a large multinational trade firm as an executive in Shanghai. He also ran his own business.

He started practicing Falun Gong in 1996 and became more responsible at work and more attentive to his family, thanks to Falun Gong's principles of Truthfulness-Compassion-Forbearance.

But things changed dramatically in July 1999 when Jiang Zemin, the former Chinese Communist Party (CCP) leader, began to suppress Falun Gong. Because he refused to renounce his faith, Mr. Lin was arrested by officers from the Yangpu District Police Department in January 2000. He was put in criminal detention and later taken to the Shanghai First Forced Labor Camp to serve 18 months, which was subsequently extended by six months.

With the help of practitioners outside of China, Mr. Lin fled China and went to Canada in February 2002. Although he now lives in a land of freedom, the intensive brainwashing at the labor camp remains a nightmare for him.

Mr. Lin was held in Section 3 of the labor camp when the events described above happened. That night, on January 30, 2001, he followed the guard to an office.

“Have you watched the news on TV today?” asked Hong, one of the team leads.

Several hours earlier, Mr. Lin had been forced to sit on a small stool and watch TV, surrounded by three inmates who were assigned to watch him. Watching videos that slandered Falun Gong was a norm in the brainwashing sessions. But that day's program was a bit special. What was shown on TV was a self-immolation incident that had taken place on Tiananmen Square a week before, on January 23, 2001, and it was frightening.

Mr. Lin remembered one particular scene of police officers putting out the fire on Liu Chunling, one of the self-immolators who, it was claimed, was a Falun Gong practitioner. Mr. Lin saw in the video a bent pipe-like object hit Liu on the head and bounce back against the fire extinguisher at high speed. The news anchor said that these “Falun Gong practitioners” set themselves on fire to achieve “consummation.”

Mr. Lin was shocked. The self-immolators in the news did not seem to be rational people, let alone Falun Gong practitioners who are always considerate of others and strive to be good citizens.

“What do you think of this? Falun Gong practitioners are so absurd. Right?” Hong’s voice brought Mr. Lin back to reality.

“This is a big lie,” Mr. Lin replied. “Master Li [the founder of Falun Gong] has explained clearly that killing and suicide are not permitted in Falun Gong. Those people are not Falun Gong practitioners, and you cannot blame Falun Gong for what they did.”

He said he was shown more than what was on the news, just like other brainwashing videos that he was forced to watch in detention. “I hope that there is a thorough investigation of this incident, instead of everyone jumping to conclusions. I hope you can help me voice my concerns since I have no personal freedom while I am in detention. I want to know if we have evidence that they are Falun Gong practitioners. I wonder who those people really were that set themselves on fire. Why did they do that?”

Hong had no reply. After a while, he said, “I don’t know. You can ask your team lead about it.” Then he left.

Mr. Lin was subjected to savage beatings and other forms of torture while in detention. He was also forced to do unpaid slave labor and attend brainwashing sessions. It was not until he arrived in Canada in 2002 that he learned that the self-immolation incident had been used by the CCP to incite the public hatred of Falun Gong, and to brainwash detained Falun Gong practitioners across China. No wonder he was forced to watch the self-immolation videos while he was in the labor camp.

During a recent interview, Mr. Lin recalled that the staged self-immolation incident occurred 18 months after the persecution of Falun Gong began in July 1999. By that time, the suppression had lost its momentum and many people were sympathetic to Falun Gong practitioners who were being brutally and unjustly tortured. This was why Jiang and the CCP decided to defame Falun Gong via the self-immolation incident so as to escalate the persecution.

Mr. Lin recalled that every practitioner detained in the Shanghai First Labor Camp was forced to watch the self-immolation videos and ordered to sign statements to renounce their belief. He said, “The CCP used its state apparatus to defame Falun Gong and to kill self-immolators. What other lies would the CCP dare to make up?”

He commented that the self-immolation made it clear that the suppression of Falun Gong was groundless and based on deceit. 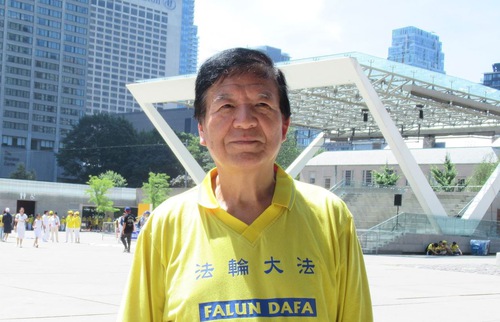 Lin Shenli, 66, says the staged self-immolation incident makes it clear that the CCP is brutal, violent, and deceitful.

“The persecution of Falun Gong is state terrorism,” Mr. Lin explained. “Just like the Great Fire of Rome, which was started by Nero to target Christians during the Roman Empire, it is one of many examples of how the CCP frames various groups. Before the self-immolation incident, people's understanding of the CCP might only have been at the theoretical level. But the incident helped people to see that the CCP is capable of fabricating lies and harming innocent people, and makes it clear that the CCP is brutal, violent, and deceitful.”

Twenty years have passed since the self-immolation incident, and the persecution of Falun Gong continues unabated. Mr. Lin said he is lucky to be living in Canada and able to practice Falun Gong openly. But in China, untold numbers of Falun Gong practitioners are still facing persecution for living by the principles of Truthfulness, Compassion, and Forbearance and trying to be good people. He hopes more people will recognize the true nature of the CCP from the self-immolation incident and break away from the regime. He calls on kindhearted people to join forces to stop the persecution.

“My Understanding of “Take the Fa as Teacher” – My Cultivation Experience During the U.S. Election”