(Minghui.org) Located on 12th Avenue on the West Side of Manhattan, the Chinese Consulate in New York is one of the locations where Falun Dafa practitioners have maintained a presence for years, to let people know about the 21-year-long persecution in China. “The Chinese Communist Party (CCP) began to persecute Falun Dafa in July 1999 and the tragedy still continues today,” said Huang Yan, a practitioner volunteer who has participated in clarifying the truth at the consulate for the past 7 years.

The location is challenging—blazing hot in the summer and freezing cold in the winter, not to mention the gusts of wind off the Hudson River behind them. “We feel we need to be here and speak out for those whose voices have been silenced,” Huang said, referring to the large number of practitioners who have been detained, tortured, and killed in China for their belief in Dafa's principles of Truthfulness-Compassion-Forbearance.

According to a recent report on Minghui, at least 41 Falun Dafa practitioners were sentenced in August 2020 for practicing their spiritual belief. 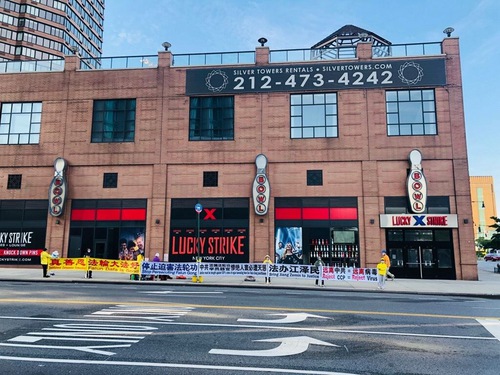 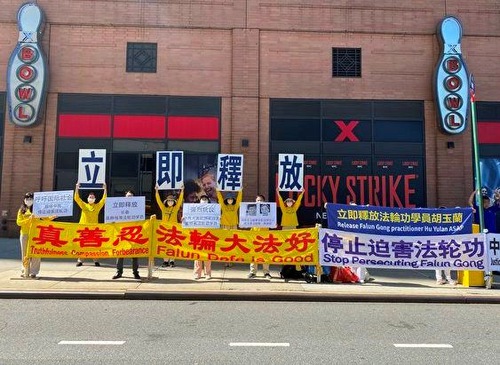 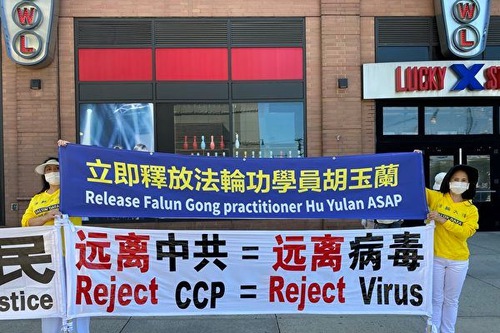 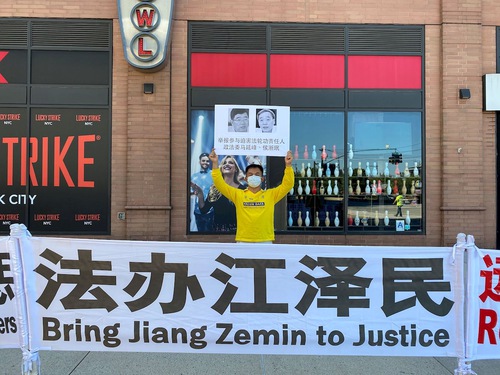 A Window for Truth

Close to the Hudson River, the numerous piers in the area are a popular tourist destination. Attracted by the practitioners' gentle exercises and beautiful music, many passersby stop to read the banners and talk with practitioners.

Once, after a middle-aged man learned about what was going on in China, he asked why Huang and the other practitioners did not stand directly outside the Chinese Consulate. When she said that the consulate officers did not allow that, the man talked to two police officers on duty nearby and explained the situation. He then called Huang over and said, “These police officers have agreed that from now on you can do it here at this street corner (a few steps from the consulate entrance) and pass out the information.”

Another time, a woman was so impressed by the practitioners’ group exercises that she drew a picture to show their graceful movements.

There have been some amazing experiences while clarifying the truth outside the consulate. One day, Huang handed a pamphlet about Falun Dafa to a pedestrian as usual. She also explained to him that, by suppressing Falun Dafa and the principles of Truthfulness-Compassion-Forbearance, the CCP has endangered humanity. “Wow!” the man exclaimed. “What a coincidence! Last night, I had a dream that someone would give me something and tell me something very important. Now I know what it is.” He chatted for a while and asked several questions before leaving.

Practitioners have been able to maintain their presence at the consulate even while following the government policy of social distancing during the coronavirus pandemic. Along with doing the exercises, they put up banners emblazoned with “Falun Dafa is good” and “Truthfulness, Compassion, Forbearance.”

Huang explained that the pandemic reminds people how vulnerable we are when faced with catastrophes. One time, several tourists from Europe stopped and talked with practitioners and accepted some materials. When they heard how practicing Falun Dafa benefits people both physically and spiritually, they said they would learn it online when they returned home.

Some days were very cold, said Li, another practitioner who often comes to the consulate to participate. One day in early April this year, the temperature was so low that she still felt cold, even in her heavy winter coat. When she remembered how much practitioners suffer in China for their belief, she held a banner as usual, calling for the release of practitioners detained in China.

Right at that moment a car stopped in front of the banner. The driver, a young woman wearing a mask, rolled down the window and called out to practitioners, “Falun Dafa is great!” Other passing vehicles also honked their horns in support. “My heart was filled with warmth on such a freezing cold day,” recalled Li.

Another day, a woman drove from New Jersey to meet practitioners. She had read about Falun Dafa and wanted to learn the exercises. Huang taught her the movements and shared her own story. The woman thanked her sincerely for their perseverance through the years.

Looking back at these experiences, Huang said she feels very fortunate because Falun Dafa has taught her how to truly become a better person. “Even during such a catastrophic pandemic, it offers me a feeling of safety and hope for the future,” she said.

“Mother and Daughter Imprisoned for Their Faith, Daughter Arrested Again Three Months After They Reunite”