(Minghui.org) (Continued from Part 1) July 20, 2020, marked 21 years since the Chinese Communist Party (CCP) launched its nationwide persecution of Falun Gong, a peaceful Buddhist School practice based on the principles of Truthfulness-Compassion-Tolerance. To commemorate the anniversary, the Australian Falun Dafa Association held an online rally calling to “End 21 Years' Persecution of Falun Gong” on July 20, 2020. 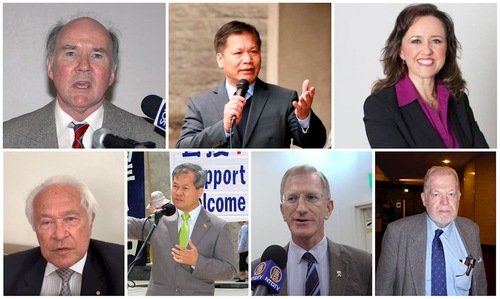 In their speeches, the academic and community leaders praised Falun Gong practitioners for bravely persevering in resisting the CCP’s brutal persecution for 21 years. Speakers also praised practitioners for being the best members of civil society and representing the return of Chinese social morality. 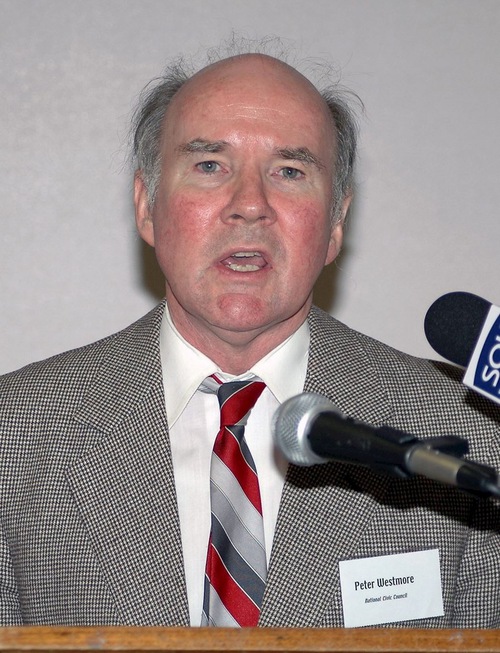 “It is the 20th of July 1999 which will live in the history of mankind as a day of infamy,” he said. “Peaceful, law abiding citizens of China, then numbered in their tens of millions, became enemies of the state. And the whole resources of the Chinese Communist Party, of the Chinese state, were then deployed to smash this movement of people who believed in truthfulness, compassion and forbearance, which I would say every civilized person in every society upholds and believes in.”

“The Chinese Communist Party sets about the barbaric and brutal practice of killing Falun Gong practitioners for their organs to supply transplantation trade. And it's a matter of tragic regret that the regime in Beijing with all of the tools at its disposal, which included the army, the police, those who administer the prison system and even the medical profession were all enlisted into this brutal process of killing Falun Gong practitioners to harvest their organs.”

“When I first heard about it, I also didn't believe,” he recalled. “But when I did a Google search and I just put in two words, China and transplants, and immediately page after page of websites came up in English on which hospitals in China were advertising organs, which were available for transplant.”

“And in fact, in some of them, it even said that if the organ transplant did not take, they would be able to supply organs within a matter of weeks. I come from a medical family and know that in Australia people who are waiting for organ transplants often have to wait certainly months, but usually years. When I saw that, I knew that it was only one way in which that supply of organs could be maintained. And that was by killing people.”

He recommended the book Minghui Report: The 20-Year Persecution of Falun Gong in China as evidence that the persecution is carried out systematically.

Editor-in-Chief of Chinese Media Advises Withdrawal from the CCP 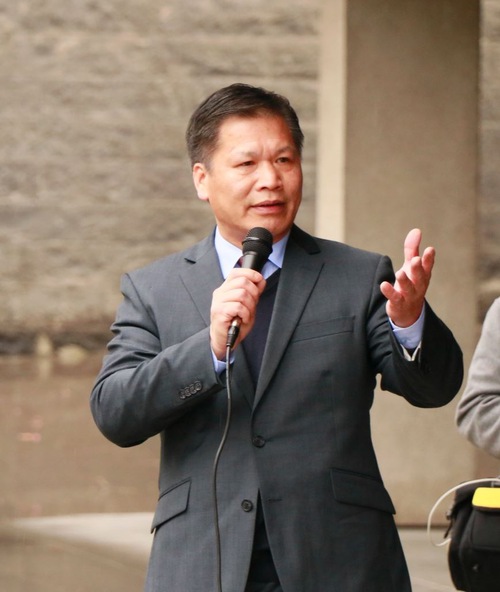 Yuan Jie, President and Editor-in-Chief of Tiananmen Times and Chairman of the China Democratic Party

“The 21 years of persecution has showed us the true nature of the CCP, and the ideology it supports is contrary to universal values,” said Yuan Jie, President and Editor-in-Chief of Tiananmen Times and Chairman of the China Democratic Party.

“We should support Falun Gong practitioners and ask the Chinese Communist government to stop its persecution of Falun Gong.

“The CCP damages morality and instigates hatred in China via violence and tyranny. The Party covered up the coronavirus epidemic, leading to the virus spreading across the world. So far over half a million people have died from the virus infection. We are still suffering the consequences of the pandemic.”

Yuan said that the CCP is dangerous to the whole world. He called on CCP members to quit the Party and said each and every country should cut their relations with the CCP regime.

Chair of Vietnamese Community: The CCP Regime Is a Threat to Global Democracy 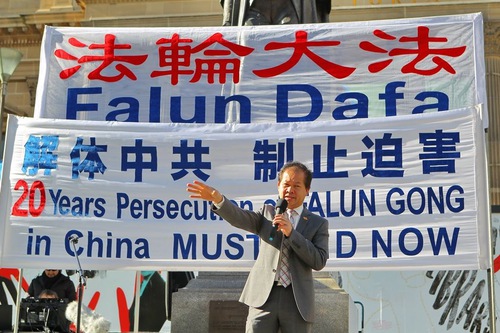 Bon Nguyen, President of the Victorian Chapter of the Vietnamese Community in Australia

“The CCP never follows the international covenants it signs,” said Bon Nguyen, President of the Victorian Chapter of the Vietnamese Community in Australia.

He said history has shown that the CCP is a ruthless ruler, referring to its killing of students on Tiananmen Square and oppression of the Tibetan people. It has brutally persecuted Falun Gong practitioners for 21 years, torturing them in labor camps and prisons, and even conducted live organ harvesting, he said.

Nguyen said that although the CCP has persecuted Chinese citizens for many years, the free world has not helped the victims, using the excuse of not interfering in in other countries' internal affairs.

“If we continue to behave like this, what is happening in Hong Kong today will happen to us,” he warned.

“The CCP kills its own people while showing the world that it is a superpower. We must be alert that as along as the CCP regime exists, it threatens our democracy and freedom. We must stand up courageously to uphold our values and enhance our guard against the CCP. 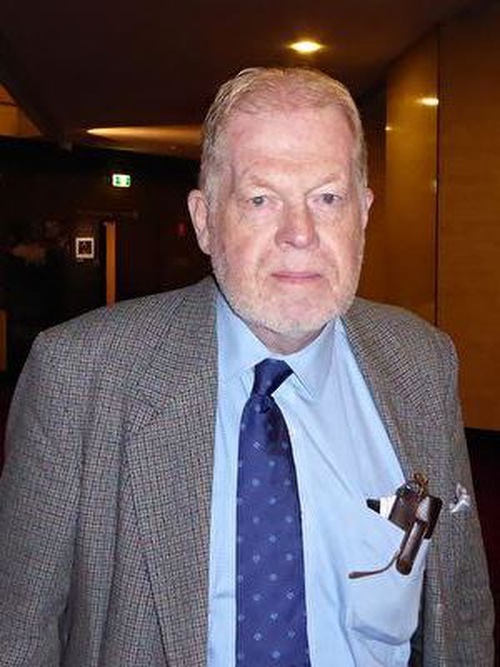 “Powerful countries in human history, such as the Roman Empire, were destroyed due to persecution of human rights,” said Andrew Bush, a human rights advocate and National Secretary of Better Hearing Australia.

He wished that the CCP would disappear so that China can become a democratic country. Then Falun Gong practitioners can have freedom like they have in Australia, he said.

Legal Scholar: Australia Should Work With Other Countries to Urge the CCP to Stop the Persecution 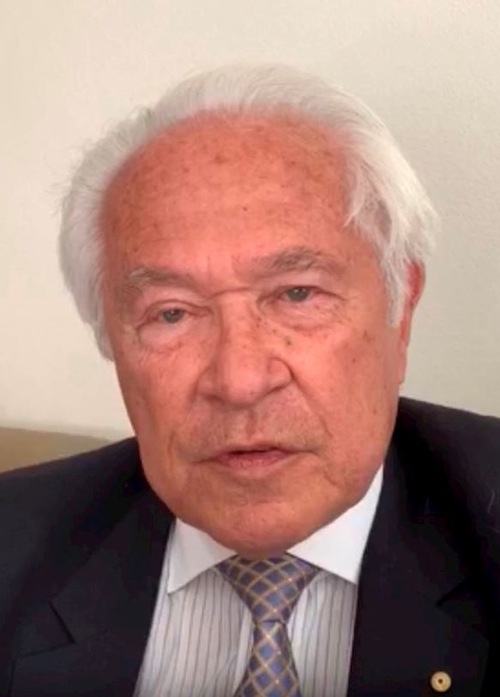 Prof. David Flint AM, a Member of the Order of Australia, legal scholar, and Emeritus Professor of Law

Prof. David Flint AM, a Member of the Order of Australia, said that the CCP convicts dissidents at will while ignoring facts, adding that these convicted victims provide more and more organs for the Party.

“It would be impossible that the organs come from a system of voluntary donations. They are coming from a live human trade. Young, wonderful people, practitioners in the Falun Gong are being taken. They're being tortured, and they are being operated on alive. Their organs are removed and they die. This is a terrible thing. This is a crime against humanity.”

He pointed out that during the coronavirus pandemic, Taiwan adopted the best practices and only seven people died from the virus although Taiwan is geographically close to mainland China. Taiwan successfully controlled the virus because they don't trust the CCP, he said.

Flint called on all people of Australia and other Western countries to stand together to urge the CCP to stop the persecution. 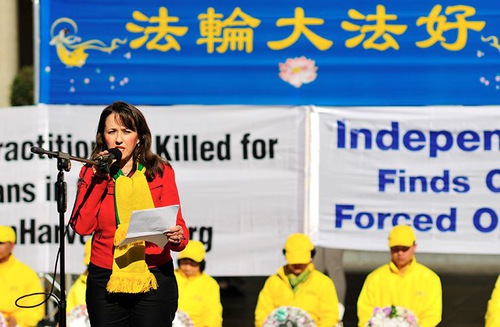 “This is an important online rally,” said Sophie York, an Australian barrister and international humanitarian law expert. “For Falun Gong practitioners, it marks 21 years of suffering.”

York quoted the Latin maxim “Lex iniusta non est lex” in her speech, which means “Unjust laws are not laws.”

“How can China honestly call itself the People's Republic if the people are being oppressed inhumanely?” she said. “All human beings have the right to their thoughts, their consciences, their beliefs, the right to be at liberty, to associate freely, to procreate, to own one's own private property and so forth. And it's the most natural thing in the world for a human to have a faith.”

“Twenty-one years ago, mid 1999, the appalling 610 Office was created, its purpose to oversee the coordination and implementation of official persecution of the Falun Gong. Many good Chinese citizens have since that year been oppressively monitored, arrested, sentenced to reeducation through labor camps or even prison, hundreds of thousands of people, innocent people.”

“And the injustice and indignity doesn't end there. As we've heard the independent tribunal in the UK presided over by Sir Jeffery Nice QC in 2018, [found] it is beyond all doubt that inhumane organ harvesting of Falun Gong practitioners is taking place.”

Ms. York called on the whole world to condemn the atrocities.

“Because of a pandemic caused by the Chinese Communist Party's mismanagement of a novel coronavirus causing COVID-19, the health and safety of the entire world has been put at risk. Millions have been sick. Hundreds of thousands have died. Many more will die. If the hard, cold circumstances of this pandemic doesn't wake up the world to the hard-nose inhumanity of the communist regime, what will?”

She finally said that although she could not participate in outdoor gatherings in person as in previous years, she must show her admiration to the Falun Dafa Association for its perseverance in protesting the persecution. She also expressed her support to Falun Gong practitioners in Australia and China.

“None of us will rest until there's been an end to this appalling practice, this persecution of the Falun Gong. One day it will be brought to an end, and it will be due to the relentless efforts of good people who never give up. We will never give up.” 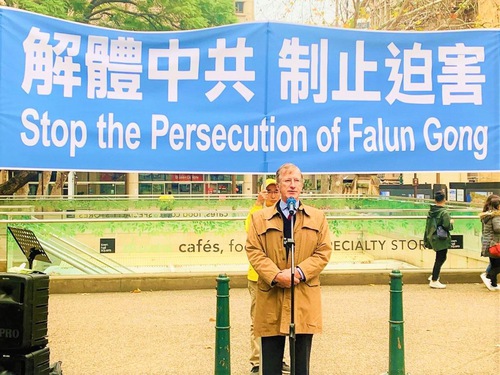 Paul Folley, General Manager of Australian TFP, said several million Falun Gong practitioners have suffered for 21 years in the persecution just because of their belief. “The crime of live organ harvesting is still going on,” he said, “But the CCP regime is doing it behind the scenes in a more concealed way.”

“The CCP regime is a system of government based on anti-natural and anti-human philosophies of life. It sees human beings, not as people, but as production units. Nobody exists for themselves or for their families, but only for the state. Every Chinese citizen is therefore property of the state, which in practice means the communist party. And this is something that in Australia, we find it difficult to get our minds around, but we need to understand this.”

“So there is no human rights in China. Except for themselves, the CCP’s dignitaries do not believe in human rights. In the 70 years of the CCP’s rule, more than 60 million people have been killed, but the rulers of the CCP are very proud of this.”

He said that if Australians acquiesce, the CCP will also take away people's rights in Australia. At present, Australians are waking up and realizing that the CCP’s “silent invasion” is threatening Australians' sovereignty, freedom and way of life.

He pointed out that the CCP seems powerful, but it is actually a giant with feet of clay; it needs Western capital and assistance to survive, so it cannot last long.

“Today we are here. All of us, all of us gathered with different persuasions, different political affiliations, but standing shoulder to shoulder to oppose this infamous totalitarian tyranny that has made suffering and deaths upon so many.”

“Lessons to Learn from the Misfortunes of Wuhan”

“Austria, Belgium and Italy: Dignitaries Support Falun Gong and Call for an End to the Persecution”