(Minghui.org) July 20, 2020, marked 21 years since the Chinese Communist Party (CCP) launched its nationwide persecution of Falun Gong, a peaceful Buddhist School practice based on the principles of Truthfulness-Compassion-Tolerance. To commemorate the anniversary, the Australian Falun Dafa Association held an online rally calling to “End 21 Years' Persecution of Falun Gong” on July 20, 2020. 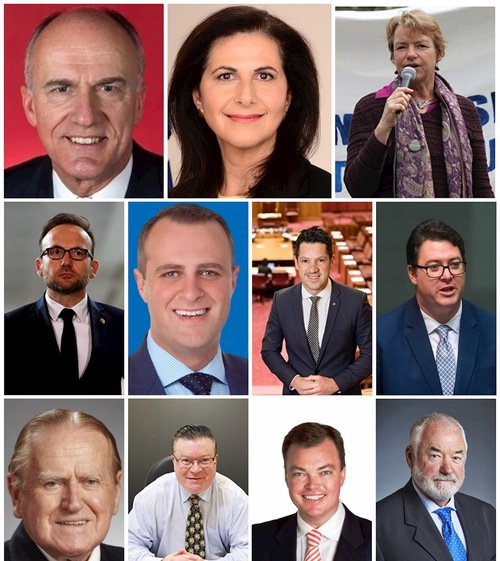 Elected officials spoke out against the CCP's human rights abuses and called for an end to the 21-year-long persecution. They commended Falun Gong practitioners' courage and perseverance when facing the CCP's persecution. The following are excerpts of the speeches. 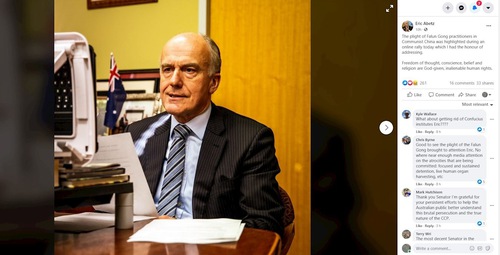 Federal Senator the Hon Eric Abetz for Tasmania, representing the Liberal Party, posted a photo and information about the online rally on his Facebook page.

Senator the Hon Eric Abetz was among the early signers of a joint statement calling for an end to the persecution of Falun Gong that was published online this July. More than 600 elected officials in 30 countries have now signed the declaration, which is posted on the Falun Dafa Information Center website.

“Today’s rally is a commemoration, commemorating the victims that have and those who still endure the brutality of a communist dictatorship, for which the idea of human rights is something to talk about at international conferences, not just domestically,” he said during the online rally.

He said that freedom of belief is a basic right, and civil societies honor and uphold these freedoms.

“So it's not a matter of surprise that parliamentarians from all sides of parties in Australia combine today with Falun Gong practitioners to offer support for the practitioners in the persecution and barbarism they endure at the hands of the Chinese Communist Party dictatorship.”

“The 21 years of persecution and brutality are horrific. But think about it we must, Falun Gong practitioners are still suffering as we speak at this online rally today. They suffer the deprivation of liberty, the intimidation of extended family, and the extrajudicial killings that are described as state-sanctioned murder for organs.”

He thanked the China Tribunal headed by Sir Jeffery Nice QC for confirming the CCP's state-sanctioned live organ harvesting. He called for action to stop the atrocities.

“After 21 years of this sustained systematic cruelty and oppression, it is encouraging to witness the resolve and determination of Falun Gong practitioners. The human spirit’s resilience in the face of persecution is astounding. It is the duty of those blessed with basic freedoms to stand in solidarity with the persecuted and fearlessly advocate for them.”

“We need to speak. We need to act. We need to shame China’s communist dictatorship to stop religious persecution and all the attendant barbaric practices designed to extinguish the exercise of religious beliefs in China, and that, of course, includes Falun Gong practitioners.”

“Freedom ultimately wins. Be it over fascism, communism or other dictatorships and oppressors, freedom wins because it must win. Be assured my colleagues, from whom you will hear from shortly, I will see this fight for freedom through with you to the very end.” 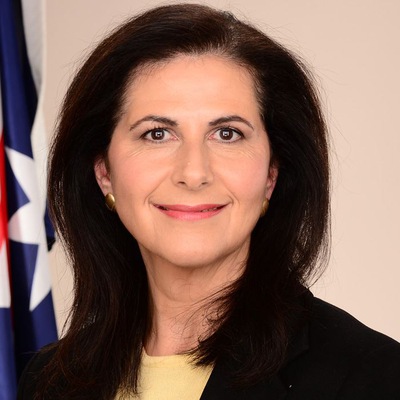 Senator Fierravanti-Wells said she had always been concerned about the fact that Falun Gong practitioners are persecuted by the CCP and even subjected to live organ harvesting for their beliefs.

During speeches in Parliament, she has repeatedly raised and condemned the practice of disregarding human rights for the sake of trade and has been constantly warning her colleagues of the consequences of yielding to the CCP.

Senator Fierravanti-Wells said that the CCP regime must take responsibility for the coronavirus pandemic.

“The Australian people will not tolerate business as usual with the Chinese Communist Party,” she said. She indicated that people from all walks of life in Australia are more aware of the CCP crimes than ever before. She said that now, more than ever, we need to maintain a strong and determined attitude to condemn the CCP.

Senator for Victoria: Unite the Forces of Justice to Fight the CCP 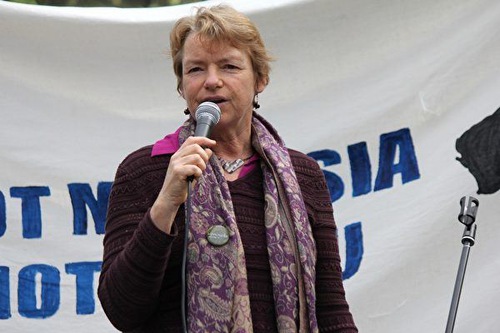 Senator Janet Rice thanked the hosts for organizing the online rally to mark the 21st anniversary of the CCP's persecution of Falun Gong. She was concerned about Falun Gong practitioners' human rights, because the cruel treatment they suffer in China is something people in the free world should take seriously.

She said that even when the epidemic broke out and everyone was quarantined at home, we should have thought of Falun Gong practitioners who are far more miserable than us. Senator Rice has publicly spoken in support of Falun Gong since 2006.

She said she also wanted to congratulate the Falun Gong practitioners for their perseverance and upholding their belief for the past 21 years. They did manifest the well-known values of Falun Gong: Truthfulness, Compassion, and Forbearance.

She pointed out that ample evidence has shown that the CCP’s atrocities against Falun Gong practitioners continue to occur in China.

Senator Rice thought that the Chinese people were excellent and that the CCP regime's persecution of Chinese people has been lengthy. The CCP thinks it is powerful and bullies others around the world.

“We cannot allow this situation to continue,” she said. “We know it's hard in Australia to feel that we have got the power to actually stand up to the Chinese communist government, but we have to do it in collaboration with people who are working for democracy and justice all around the world. We have to keep on persevering and to be working together until that justice is achieved. ” 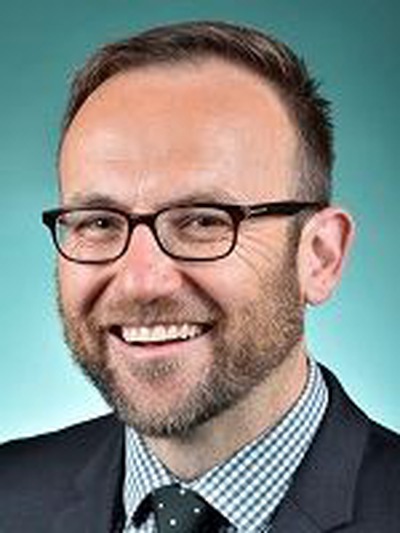 MP Adam Bandt for Victoria, Leader of the Green Party 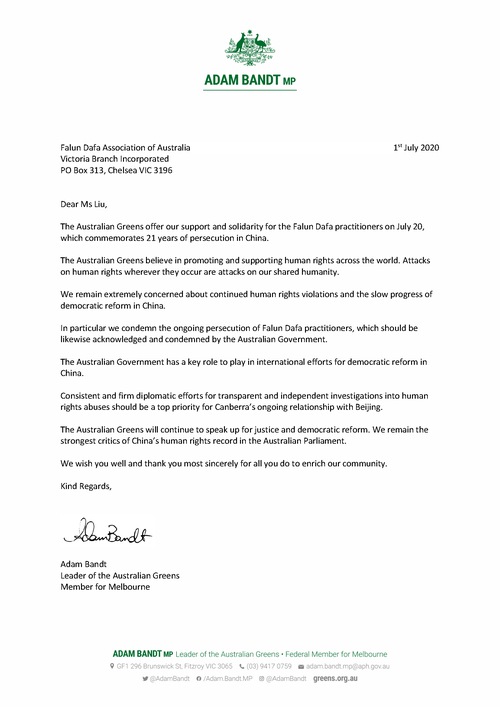 “The Australian Greens believe in promoting and supporting human rights across the world,” he stated in his letter. “Attacks on human rights wherever they occur are attacks on our shared humanity.”

“In particular we condemn the ongoing persecution of Falun Dafa practitioners, which should be likewise acknowledged and condemned by the Australian Government.”

“Consistent and firm diplomatic efforts for transparent and independent investigations into human rights abuses should be a top priority for Canberra's ongoing relationship with Beijing.” 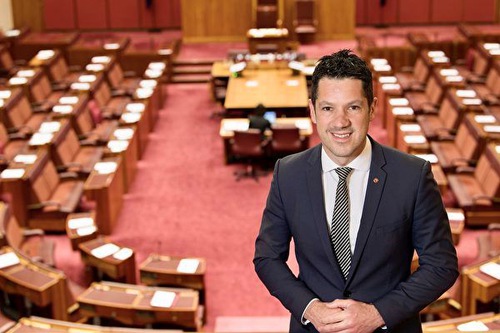 Senator Alex Antic for South Australia submitted a video statement to be replayed at the online rally. Senator Antic had also signed the joint statement calling for an end to the persecution of Falun Gong. 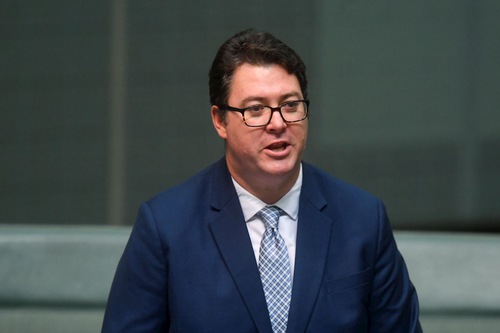 MP George Christensen for Queensland said that Australia has freedom of religion, freedom of belief, and freedom of association. These universal values belong to all people, including the people of China.

“There are reasons for that. Half of them is because all of those people hold that there is a higher power, a higher power than the Chinese Communist Party, they will not accept that and that’s why there’s such persecution of people of faith including Falun Gong practitioners.”

He believes that it is time to take action against the CCP, such as through the implementation of the Magnitsky Act in Australia to sanction members of the Chinese Communist Party and Chinese administrators who violate international laws and human rights. 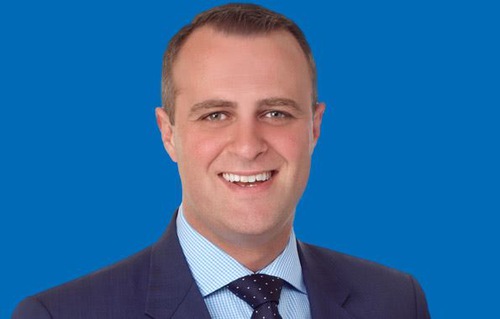 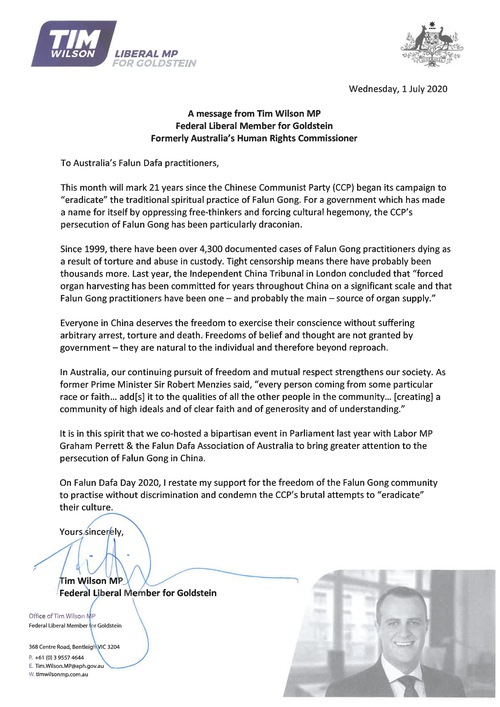 MP Tim Wilson for Victoria wrote a letter to commemorate 21 years that Falun Gong practitioners have been persecuted in China.

“For a government which has made a name for itself by oppressing free-thinkers and forcing cultural hegemony, the CCP's persecution of Falun Gong has been particularly draconian,” MP Wilson stated in his letter.

“Everyone in China deserves the freedom to exercise their conscience without suffering arbitrary arrest, torture and death. Freedoms of belief and thought are not granted by the government – they are natural to the individual and therefore beyond reproach.”

“I restate my support for the freedom of the Falun Gong community to practice without discrimination and condemn the CCP's brutal attempts to 'eradicate' their culture.” 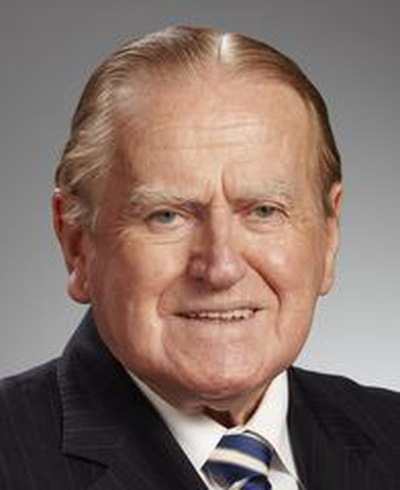 Fred Nile, a Member of the NSW Legislative Council

“What's happening to the citizens of China by their own government?” asked Fred Nile, a member of the NSW Legislative Council, in his speech during the online rally. “Putting the practitioners in prison, putting them into slave labor, and having organ transplants from living persons who obviously then die - murdering their own citizens to get human organs.” 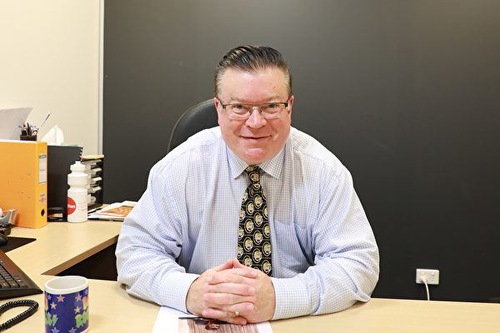 Member of the Victoria Legislative Council Bernie Finn spoke during the online rally and condemned the CCP's persecution and organ harvesting.

“The Chinese government continues the persecution of Falun Gong and so many other people across China,” Finn said. “It is something that none of us can just sit back and allow to happen. I want the people who fight for freedom in China to know that I stand with them. Certainly I want you, the Falun Gong practitioners to know that I most certainly stand with you.” 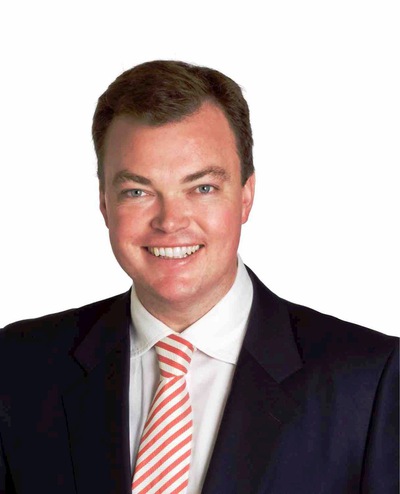 The Hon. Edward O’Donohue, Member of the Victoria Legislative Council, calls “for China to honor its international obligations, to respect people of peace, to respect individual freedoms and liberties.” 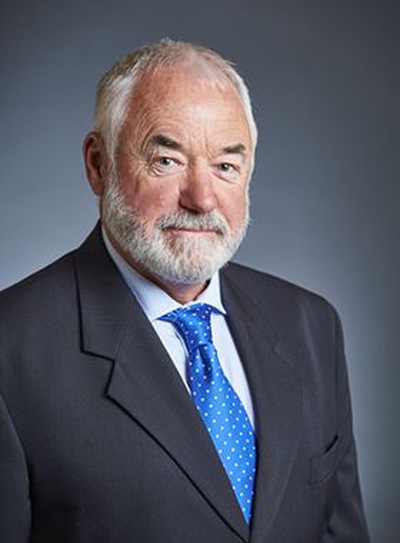 In his video speech, the Hon. Robin David Scott MLC, Member of West Australia Legislative Council, commended practitioners for their perseverance against the persecution and condemned the CCP's brutality.

“The CCP sees Dafa as a threat to its communist party ideology, and they have threatened to destroy this peaceful manner,” Mr. Scott said. “Even here in Perth, the CCP, who are represented by the consul general, are attempting to stop functions being held by Dafa practitioners. And it's always been about power.”

“The Chinese government is using labor camps to commit horrible human rights abuses such as forced labor, torture, execution, and organ harvesting. We must continue fighting. Even saving just one life will make it all worthwhile. I want to congratulate you all for continuing the fight.”