(Minghui.org) A Falun Dafa practitioner hosted a booth at the Northwest Montana Fair from August 19-23, 2020 in Kalispell, Montana. With social distancing, the crowds were less than in previous years, but people seemed more relaxed to stop and chat. With smaller instead of large groups of people passing through, it seemed less chaotic.

Falun Dafa informational materials, lotus flowers, and bookmarks were given out. The first day was much slower than normal, but it was an opportunity to talk to some of the local politicians running for office. One of the politicians running for office made a special effort to come over and say, “I want to thank you for what you are doing.” Others said the same. A vendor who passed by said, “Thanks for coming again this year!”

In the early years of attending the fair, many attendees were distant and distrustful toward the Falun Dafa booth, perhaps due to misconceptions caused by media reports that repeated the communist regime propaganda. As the years have gone by, Falun Dafa has been warmly accepted into the community and highly regarded and respected. Being a part of the fair for so many years has earned it credibility, and people now understand what Falun Dafa is.

Many young people in their western attire stopped by the booth before going to the rodeo. Some of them were well informed about the Chinese Communist Party’s human rights abuses. 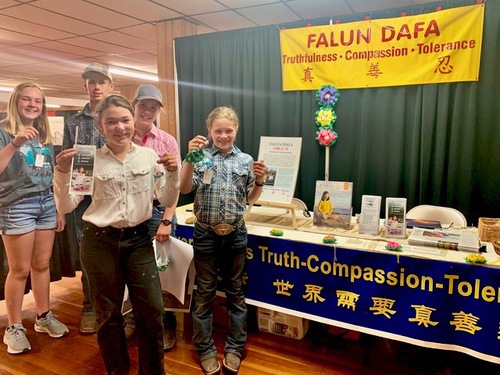