(Minghui.org) Falun Dafa practitioners held an event in central Stockholm, at Mynttorget near Riksdag on Saturday, August 15, 2020. They demonstrated the exercises, talked to people about Falun Dafa and raised awareness of the persecution in China. Drawn by the soothing exercise music, several people stopped to read the information and chat with practitioners. Many said they admired the practitioners' courage and perseverance in resisting the persecution. Others asked where they could learn the exercises. 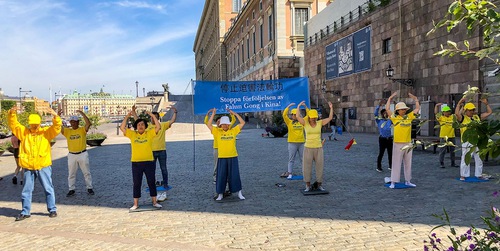 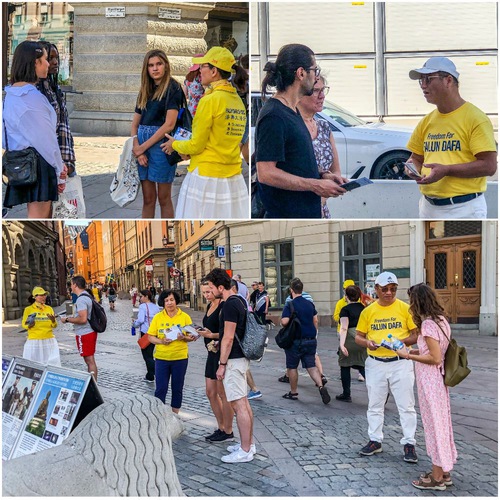 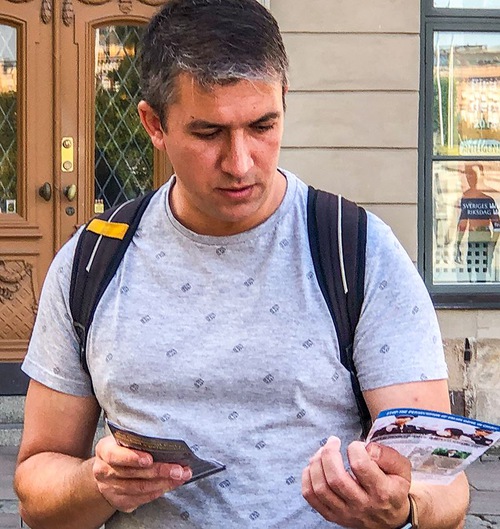 People sign the petition after learning the facts about the persecution

A mother and daughter from Mongolia talked to practitioner Ms. Chen. The daughter spoke to Ms. Chen in English, and then translated for her mother. They said that although it was the first time they have heard about the persecution, they were not surprised by anything the Chinese Communist Party (CCP) did. They have experienced firsthand how the CCP persecutes innocent people and slanders groups.

They said that one of their friends was framed and is still imprisoned in China. Many of their friends, including some from Xinjiang, are persecuted by the CCP. To silence people, the CCP makes up various charges and throws innocent people into prison. The mother said, “You know they are being wrongfully accused, but there's nowhere to redress the grievance. We are all victims of the CCP. You being here and exposing the CCP’s persecution of Falun Dafa helps us Mongolians, too. You bring us hope!”

The conversation with the mother and daughter deeply touched Ms. Chen. She said, “Clarifying the truth is really important. Practitioners’ efforts give people hope. Many people thank us. They encourage and support us. It’s really touching.”

One couple and their two sons were from the former Soviet Union. When they learned that practitioners were there to expose the CCP’s crimes, the father gave them a thumbs up and said, “The facts about the Falun Dafa and the CCP’s organ harvesting must be told. You should hold these events more often.” Their entire family signed the petition and kept encouraging practitioners to continue their efforts.

Ms. Chen said, “I found that it's easier to explain the facts about the persecution to people who have lived in former communist countries. They deeply hate communism and know that the CCP can commit any crime, such as killing Falun Dafa practitioners for their organs. One couple from Cuba strongly agreed with what I told them. They said the CCP's media broadcasts propaganda and cannot be trusted, especially how it covered up the coronavirus spread from Wuhan and caused a global pandemic. The death toll and the information that the CCP disclosed to the world are obviously lies. They praised us for standing up and exposing the CCP’s deception. They thought it was a great thing to do.” 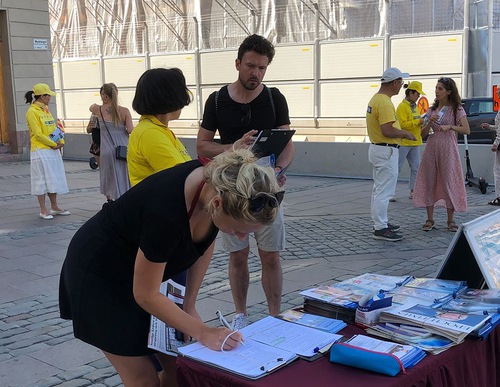 After learning the facts, people sign the petition to support practitioners' efforts to resist the persecution.

A man from Spain had a long chat with practitioner Cecilia. He works in the telecommunication sector in Madrid. He said he talked to Falun Dafa practitioners when he went to Australia. He was surprised and happy to meet practitioners in Sweden. He was keen to learn more about the persecution in China. He said, “I always thought that China was great. Now I see that the CCP treats human lives with indifference and cruelty.” He praised the practitioners' efforts to tell people about the persecution.

Two Chinese students stopped and read the display boards. The young woman said, “I only heard propaganda against Falun Dafa in China. I’ve been studying in Norway for 3 years. After I left China I was able to read factual information. Falun Dafa is completely different from what was described in propaganda in China.”

She was curious and wanted to know more about Falun Dafa, so a practitioner told her about how Falun Dafa is welcomed throughout the world, how the CCP staged the Tiananmen Square incident and how the CCP is killing practitioners for their organs. The practitioner also explained the importance of quitting the CCP and its affiliated organizations. Tears came to the young woman's eyes and she said she was deeply touched by the practitioners’ courage in standing up to spread the truth, and their 20 year long efforts. She took several materials about Falun Dafa and the persecution.

“1,410 Falun Gong Practitioners Targeted for Their Faith in July 2020”