(Minghui.org) Falun Gong practitioners held a rally in front of the Parliament of Western Australia on July 19, 2020, calling for an end to the Chinese Communist Party’s (CCP) persecution of the practice.

Practitioners who suffered persecution and fled China shared their heart-wrenching stories. Elected officials and legal professionals also spoke to show their support and call for the Australian government to help stop the persecution. 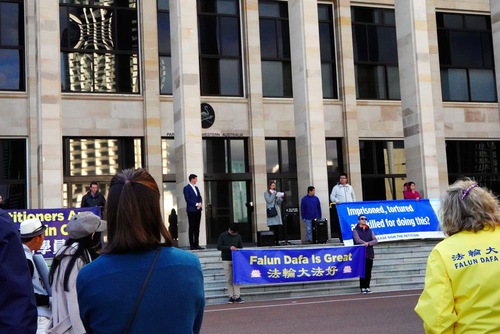 Rally in front of the Parliament of Western Australia 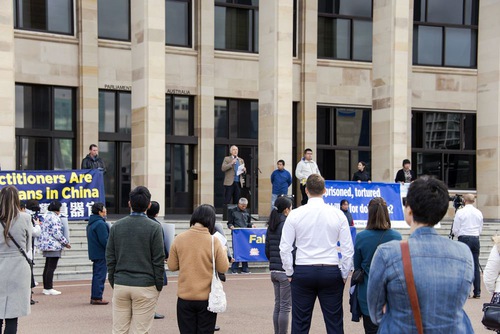 An invited guest speaks at the rally. 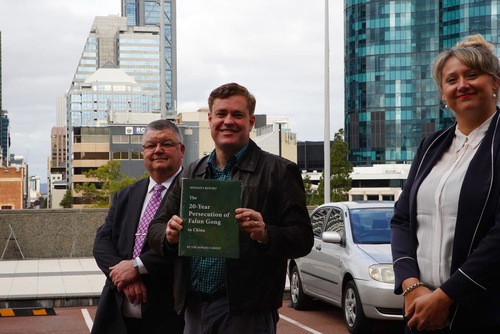 An invited guest holds a copy of Minghui Report: The 20-Year Persecution of Falun Gong in China.

“I stand with you and your group in my heart and defend your right to freedom of belief in a peaceful way,” said Senator Dean Smith.

“[The] Chinese government infringes on human rights, such as forced labor, torture, imprisonment, and live organ harvesting,” said Robin Scott, Member of the Western Australian Legislative Council. He said we must continue protesting and that if even if only one person is saved from persecution, it is worth the effort. He encouraged everyone to have the courage to speak up.

“I stand here to safeguard freedom with you,” said Vice Mayor Peter Abetz of Gosnells City. He was a Member of the Western Australian Legislative Assembly from 2008-2017.

He said the Australian government and its trading partners should take responsibility for ensuring freedom of religion and freedom of speech and that silence when faced with evil is not a solution.

“I support you unconditionally as you are courageous people. You are fighting for freedom and justice,” said Professor Augusto Zimmerman, the head of the legal department at the Sheridan Institute of Higher Education and president of the Western Australian Legal Theory Association.

“People who fight for justice are worthy of respect,” Zimmerman said. “As a former commissioner with the Law Reform Commission of Western Australia [2012-2017] and a professor of law, I am your friend. Together, we will fight to the end for your rights.”

Human rights lawyer Andrea Tokaji was born in Romania and is well aware of the brutality of communist regimes. She expressed admiration for the practitioners’ perseverance in their belief. During an interview with the Epoch Times and NTD, she said Falun Gong practitioners endure torture and trauma, physically, mentally and psychologically, but remain steadfast in their belief.

“These people are outstanding, unbelievable,” she said. “We should praise this resilience, courage, and strength. As human beings, if there is no faith and dignity, what else is there?”

Tokaji said Australians should support and help those fighting for human rights.