(Minghui.org) From the U.S. to the U.K., from Canada to Taiwan, countries and regions around the globe have felt the Chinese Communist Party (CCP)’s threat to the free world. Among them, the U.S. government has been leading the effort to counter the CCP's influence.

When interviewed by The Hill on July 16, U.S. Secretary of State Mike Pompeo emphasized that the CCP had always failed its promises and, by doing so, endangered the world. He pointed to the coronavirus pandemic as an example. When he visited the U.K. on July 21, he applauded its decision to ban Huawei from future 5G networks and called on other countries to take similar actions. In a speech at The Richard Nixon Library, he reviewed missteps of U.S. administrations in the past several decades and expressed his wish for changes in China. 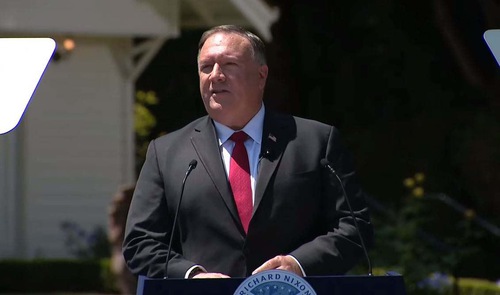 U.S. Secretary of State Mike Pompeo speaks at the Richard Nixon Presidential Library and Museum in California on July 23, 2020.

Besides progress in the U.S., the Inter-Parliamentary Alliance on China (IPAC) was formed on June 5 with representatives from over 10 countries. In an announcement on July 19, the IPAC called for joint efforts to stop forced organ harvesting of and other brutalities against practitioners of Falun Gong, a meditation discipline based on the principles of Truthfulness-Compassion-Forbearance that has been persecuted by the CCP since July 1999.

During his interview with The Hill on July 16, Pompeo said, “This is a Chinese Communist Party that is acting in a way that poses real threats to the world.” He said the threats include the CCP's intellectual property theft, failure to comply with the Paris climate accord, and many other actions that belie what it promised to the world.

The CCP's coronavirus cover-up is a case in point: “The Chinese Communist Party has prevented anyone from finding out the answer to that question [the source of the virus]. They denied access to the laboratory, they’ve – to the World Health Organization, anyone who wanted to talk about it who was inside of that laboratory, whether they were a journalist or a doctor, has been precluded from talking about that,” Pompeo said. “This is a result of the Chinese Communist Party hiding the data.”

During his recent U.K. trip, Pompeo held a joint press conference with British Foreign Secretary Dominic Raab on July 21. Raab reiterated the need to collaborate with the U.S. and other countries in the Five Eyes intelligence alliance and noted lessons learned from the coronavirus pandemic. He also endorsed cooperation with other Western countries on issues such as Hong Kong to stand up for their values. “We’re more influential, we have more impact when we work together,” he said.

Pompeo called on more countries to join this effort and “condemn China’s broken promises on the Sino-British treaty.” When answering questions from reporters, he said such efforts were not to confront China; rather, “the entire world needs to work together to ensure that every country, including China, behaves in the international system in ways that are appropriate and consistent with the international order... You can’t threaten countries and bully them in the Himalayas. You can’t engage in cover-ups and co-opt international institutions like the World Health Organization.”

Speaking at the Richard Nixon Presidential Library and Museum in Los Angeles on July 23, Pompeo said previous U.S. administrations imagined engagement with China would produce prosperity, but “today we’re all still wearing masks and watching the pandemic’s body count rise because the CCP failed in its promises to the world. We’re reading every morning new headlines of repression in Hong Kong and in Xinjiang.”

It has been nearly 50 years since the engagement started. “And indeed, centrally, from the Secretary of State’s perspective, is America safer? Do we have a greater likelihood of peace for ourselves and peace for the generations which will follow us?” he asked.

He said Nixon hoped to change the CCP through collaboration. “The truth is that our policies – and those of other free nations – resurrected China’s failing economy, only to see Beijing bite the international hands that were feeding it,” he said. “We opened our arms to Chinese citizens, only to see the Chinese Communist Party exploit our free and open society. China sent propagandists into our press conferences, our research centers, our high schools, our colleges, and even into our PTA meetings.”

From businesses to Hollywood, from slave labor to other human rights violations being ignored, our universal values have been challenged. “I grew up and served my time in the Army during the Cold War. And if there is one thing I learned, communists almost always lie. The biggest lie that they tell is to think that they speak for 1.4 billion people who are surveilled, oppressed, and scared to speak out,” he said. “Quite the contrary. The CCP fears the Chinese people’s honest opinions more than any foe, and save for losing their own grip on power, they have reason – no reason to.”

That is why Pompeo called on the free world not to repeat the mistakes of the past. “And if we don’t act now, ultimately the CCP will erode our freedoms and subvert the rules-based order that our societies have worked so hard to build,” he said.

Barr: The Free World Should Not Bow to the CCP

Speaking at the Ford Presidential Museum in Michigan on July 16, U.S. Attorney General William Barr said he agreed with National Security Advisor Robert O’Brien that “[t]he days of American passivity and naivety regarding the People’s Republic of China are over.”

When President Ford visited China in 1975, people would not know China would one day emerge after the Cold War as a near-peer competitor of the United States. Not only that, but the CCP’s “aggressive” and “orchestrated” moves are harming the world he said, adding that American businesses have played a critical role and that China has dominated the pharmaceutical supply industry, hacked universities, and stolen intellectual property.

Furthermore, the CCP has bent the values of the international community. “Hollywood now regularly censors its own movies to appease the Chinese Communist Party, the world’s most powerful violator of human rights,” Barr said.

“The CCP has launched an orchestrated campaign, across all of its many tentacles in Chinese government and society, to exploit the openness of our institutions in order to destroy them,” he concluded. “To secure a world of freedom and prosperity for our children and grandchildren, the free world will need its own version of the whole-of-society approach... Our freedom depends on it.”

Conservative Party of Canada Leader Andrew Scheer said incidents over the past few years have shown a pattern of aggressive behavior by the CCP. “It is time for freedom-loving nations around the world to wake up to this reality, to work together to support each other in pushing back against these very assertive moves by the Chinese government in Beijing,” he said during a recent interview with Minghui.

Among all the suppressed groups in China, about 100 million Falun Gong practitioners have suffered tremendously for their belief since July 1999. On the 21st anniversary of the persecution of Falun Gong, the Inter-Parliamentary Alliance on China (IPAC) issued a statement in support of Falun Gong. They condemned the CCP’s crime of forced organ harvesting from Falun Gong practitioners and urged the world to help end the persecution.

Launched on June 5 with representation from over 10 nations, IPAC was established to foster collaboration between countries to handle the challenges posed by China on international rules, human rights, and national integrity.

“Today we highlight the plight of the Falun Gong together with all religious minorities who have suffered from repression under the rule of the Chinese Communist Party,” the statement concluded. “We remind the world of the depravities they continue to suffer, and urge the world to stand up and speak out for an end to such repression, an end to impunity, and for justice, accountability, human rights and human dignity for all the peoples of China.”

“The Poster That Banished My Fear and Stress”

“From the Soviet Union to the CCP, the Same Lies Continue to Harm People”