The Poster That Banished My Fear and Stress

(Minghui.org) After the coronavirus lockdown in Wuhan was lifted, I decided to go out of town to look for a job.

While traveling one day, a small poster on a telephone pole caught my eye. Getting off the bus, I walked over to the pole and was excited beyond belief to see these familiar words, “Truthfulness-Compassion-Forbearance is good!”

I could tell from the way it was faded that the poster had been there for a while, but the large characters on it were still clearly visible. My respect for the local Falun Gong practitioners grew immediately. After reading it, I felt refreshed––the fear, the stress, and all the other problems caused by the pandemic seemed to have vanished in an instant. I sent an image of the poster to my friends, and they were all inspired as well. 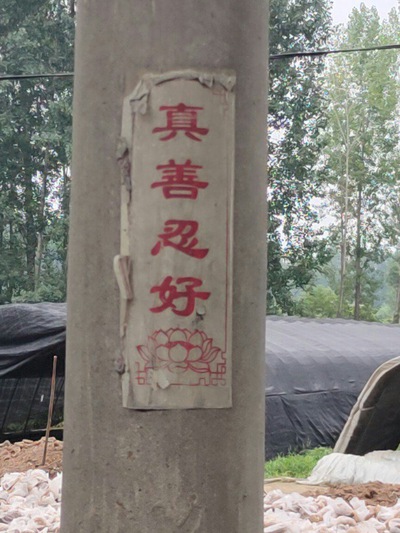 The poster on the telephone pole

I met Falun Gong practitioners while serving a jail sentence for crimes I'd committed. I witnessed how brutally the law enforcement agents treated Falun Gong practitioners, who endured the torture and injustice with compassion even as they peacefully resisted the prison-facilitated forceful brainwashing aimed at compelling them to renounce their faith.

From the practitioners, I learned that, contrary to what the Chinese Communist Party (CCP) propagated on its media, Falun Gong is a traditional cultivation way that benefits our physical and mental health and that practitioners of Falun Gong follow the principles of Truthfulness, Compassion, and Forbearance to be good people.

The Backbone of China

When I first arrived at Fanjiatai Prison in Hubei Province, many inmates there already knew me and were scared of me because of my notoriety. Ironically, it was for the exact same reason that the guards appointed me to be the inmate lead in charge of all new arrivals.

All Falun Gong practitioners sentenced in Hubei Province are incarcerated in Fanjiatai Prison. Because of the negative government propaganda that slanders Falun Gong, I had a bad impression of all Falun Gong practitioners even though I didn’t really know what Falun Gong was. The guards told me to monitor them, try to force them to accept a guilty plea, and try to make them obey the prison rules. Regardless of what I tried, however, the practitioners refused to listen to me. The fact that they were not afraid of me embarrassed me, because anyone else would have readily succumbed. Frustrated, I was rude to them.

One inmate I befriended empathized with the practitioners because, like them, he had also been wrongfully indicted. He told me that the Falun Gong teachings were very reasonable and that the practitioners were all kind but were treated unjustly by the CCP. He understood why they refused to follow the prison regulations and asked me to be nice to them.

I was later assigned to the division that housed practitioners and witnessed how the guards tortured them to try to force them to renounce their faith. The torture was gruesome.

Fanjiatai Prison was a slave factory where all the inmates were made to work unreasonably long and hard. Our day began before dawn, when everyone was expected to squat on the ground for the daily roll call. One morning, the head of all the inmate leads pointed to the back and commented, “They're the backbone of our country!” Turning around, I saw Falun Gong practitioners bravely standing in the dark in the cold wind.

If the practitioners had pleaded guilty and followed the prison rules, their lives would have been much easier in prison. But they all stuck to the truth that Falun Gong is good and that they were innocent. Because of that, they were severely tortured. The guards also instigated inmates to torture them. Nevertheless, all of the practitioners I met remained steadfast in their faith, and often shouted, “Falun Dafa is good! Truthfulness-Compassion-Forbearance is good!”

The prison management set up a rule that Falun Gong practitioners were allowed “one bite of food per meal,” “one hour of sleep each day,” and “one pair of pants to wear in winter.” The buildings were not heated and guards poured cold water on practitioners to freeze them while, at the same time, forcing them to work very long hours every day.

Once I overheard the inmate head chatting with a practitioner who said that they were not guilty and it was the CCP that had violated the law by persecuting innocent people. Torturing detainees was not only in violation of the law in the prison but also of the Criminal Law of China. The practitioner said he was planning to sue the prison and the guards.

Sympathetic to practitioners’ situation and impressed with their integrity and courage, the inmate head and I helped them whenever we could, including forwarding their notes, notifying them when the guards were going to inspect the cells, and hiding their notes for them.

The Falun Gong Teachings Help Me Quit Drinking and Smoking

My buddies and I took turns reading the book Zhuan Falun, the main teaching of Falun Gong, secretly. I finished reading it once and thought it was great. Because I passed notes for practitioners, I also had the chance to read the other lectures by Teacher Li Hongzhi, the founder of Falun Gong. Gradually I stopped drinking alcohol and smoking, thanks to Falun Gong’s teachings that helped me quit both of my bad habits.

Although smoking in Fanjiatai Prison was allowed, drinking was prohibited. Inmates who had money bribed guards to buy them wine and food. Some inmates even sold alcohol and cigarettes to other inmates. If caught for drinking, however, inmates had points deducted. My life was much easier after I quit drinking.

The Falun Gong teachings also gave me different perspectives on the world, and I no longer felt it right to be the inmate lead bossing others around—although the position had allowed me many privileges, including opportunities to have my sentence reduced.

In addition, only those with special connections to the prison staff were selected to be inmate leads. Many inmates with no connections bribed guards, hoping to be selected. That was why my decision to give up the position was unfathomable for the guards, and they double-checked with me to make sure that I knew what I was doing. I told them that I could still get my sentence reduced by working harder.

Falun Gong practitioners filed legal complaints against guard Li Yong to protest his brutality and other illegal conduct. Some inmates also filed a joint complaint with the prison management, citing Li Yong for breaking the law by searching the cells without prior notice and searching inmates, confiscating their personal items, including cash. They also listed witnesses in their complaint.

It turned out that Li Yong's family had close ties within the prison system in the area, including Fanjiatai Prison. So, instead of investigating Li Yong, the prison management retaliated by withholding the complaints and revising prison policy. While inmates were originally permitted to possess cash, the revisions included minimizing opportunities for sentence reduction for three years if an inmate had cash and terminating any sentence reductions already in place.

Unless they agreed not to testify, the witnesses listed would have their sentences extended and reductions cancelled if applicable, and they would be excluded from the possibility of sentence reductions for three years. The prison management also made it clear that prisoners would not permitted to report on the conduct of guards and other prison staff.

Some prisoners transferred from other prisons to work at Fanjiatai Prison also wrote a legal complaint that revealed the dark secrets of Fanjiatai Prison and its illegal affairs. They managed to hand it in to the inspectors from outside the facility. Infuriated, warden Zhou Hong ordered those responsible to be put under strict scrutiny and kept all inspectors away for a long time.

“Treating Discomfort As a Good Thing”