Canadian Conservative Party Leader: Time for Freedom-Loving Nations to Wake Up and Work Together Against the CCP

(Minghui.org) While the world is still reeling from the coronavirus pandemic caused by the Chinese Communist Party's (CCP) disinformation, the CCP abruptly passed a national security law on May 28, 2020, that essentially ended Hong Kong's autonomy.

Under the provisions of the Basic Law of Hong Kong, which Britain required China draft and adopt before returning Hong Kong to China in 1997, Hong Kong would have its own legislative system, as well as human rights and other freedoms, as a special administrative region (SAR) of China, for 50 years. The CCP's national security law essentially erases these rights, reneging on the treaty, and dissolves the “One County Two Systems” that had governed Hong Kong. The move has exacerbated tensions with democratic countries around the world.

Conservative Party of Canada Leader Andrew Scheer said incidents over the past few years have shown a pattern of very aggressive behavior by China. “It is time for freedom-loving nations around the world to wake up to this reality, to work together to support each other in pushing back against these very assertive moves by the Chinese government in Beijing,” he said during a recent interview with Minghui.

Scheer is not alone in his condemnation of the CCP's actions. Prime Minister of the United Kingdom Boris Johnson penned an article for the South China Morning Post, a Hong Kong publication, showing his support for Hong Kong citizens. The article was published on June 3.

“Many people in Hong Kong fear that their way of life — which China pledged to uphold — is under threat,” Johnson wrote. “If China proceeds to justify their fears, then Britain could not in good conscience shrug our shoulders and walk away; instead we will honor our obligations and provide an alternative.”

Britain has pledged to give almost 3 million Hong Kong citizens, who either have British National Overseas passports or are eligible for one, a pathway to citizenship in Great Britain.

The United States has also been putting pressure on the CCP in the aftermath of the coronavirus pandemic and the passing of the National Security Law to revoke Hong Kong's autonomy. U.S. Secretary of State Michael Pompeo spoke to Fox News on May 31 about the CCP's pattern of aggressive behavior.

“They steal information. They deny freedom of expression. They oppress their people and they present risk to people all across the world. Democracies behave completely differently,” he said during the interview.

Pompeo said the U.S. and its Western democracy-loving partners will need to keep the pressure on China for quite some time to see meaningful results.

The U.S. currently has 60 bills in Congress, many of them bipartisan, that aim to hold the CCP accountable for its misdeeds.

Scheer: Forming an Alliance of Countries Against the CCP 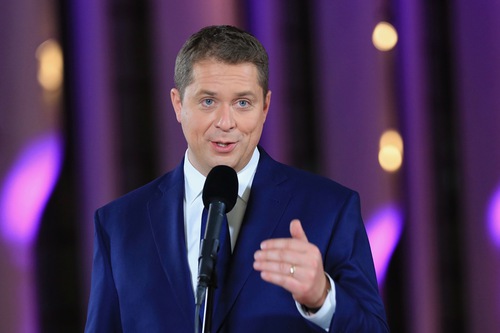 Andrew Scheer, leader of the Conservative Party of Canada, calls for action against the CCP.

The CCP's mistreatment of Hong Kong residents and foreign countries reflects what CCP officials have been doing to the people of mainland China for decades, Scheer said. He said 20 or 25 years ago, some people held hope for reform in China that would lead to more freedom, but the series of actions in the past few years indicate this is not going to happen.

He said the events of this year are a wake up call for G7 and other countries. “I believe the best strategy would be to form an alliance of countries who have had enough, who are willing to call out the regime for what it is. So we can support each other,” he said. He believes these alliances are necessary because as the CCP retaliates against countries that stand up to it, it would inflict economic pain on each country.

“So I think we need to support each other. We need to be there for countries like Australia. So they’ll be there for us that we can all together collectively say enough is enough,” he explained, “We're not going to allow China's economic clout to get any bigger. We're not going to allow them to have as much influence in the region anymore,” he said.

Not to Suffer Unduly Anymore

An international effort against the CCP could happen instantly. “Every day we wait, every year we wait, it will only get harder and harder. So we might as well start now creating that kind of alliance of freedom-loving nations around the world, to stand up to the authoritarian of regime of China,” he said.

China has a heavy reliance on imported food and imports the highest volumes of food in the world. This gives Canada and other Western countries some leverage. “They depend on us more than we depend on them ... We've seen other countries, we've been able to as a world create alliances of countries who are committed to human rights,” Scheer said, citing the ending of apartheid in South Africa as an example.

Scheer hoped Canada would adopt strong measures against the CCP for its actions against the people of Hong Kong.

In the short term, “We should at the diplomatic level, we believe these actions [against Hong Kong by China] should be condemned. We believe it's appropriate to start looking at things like if there are agents of China operating in Canada under the cover of diplomatic protection, we need to end that,” he said, adding there are many other areas worth looking into.

Aside from the CCP's national security law's effects on Hong Kong, the Canadian government has held other discussions regarding China's human rights violations. Member of Parliament David Sweet, who is the Shadow Minister for International Rights and Religious Freedom, spoke at a parliamentary debate on May 25 and called for Canada to sanction China for its severe human rights violations against Falun Gong and other groups, especially those related to forced organ harvesting.