(Minghui.org) Today's news from China includes incidents of persecution that took place in nine cities or counties in six provinces, where at least 15 practitioners were recently persecuted for their belief. 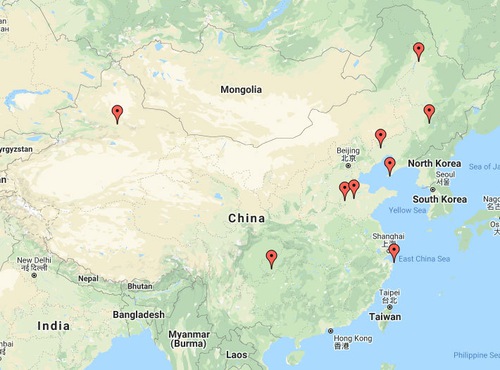 Bai Xuejian and other officers from the Beita Police Department arrested Mr. Yin Baohe on November 20, 2019, for posting Falun Gong informational materials. His home was ransacked. He is being held in the Chaoyang City Detention Center.

Mr. Yin's case was submitted to the Shuangta District Court, and a trial has been scheduled for July 10, 2020.

Mr. Sun Juru, 88, is from Ganlan Town in the Dinghai District. Two people who claimed to be police officers forcibly took his blood samples at his home on the afternoon of July 3, 2020. Two weeks prior to that, four or five people came to his home to harass him.

Mr. Sun has been harassed and his home has been ransacked over the past few years. His Falun Dafa books, VCR player, audio recorder, and U disks were confiscated.

Mr. Yan Baoli from Mapaoquan Village, Laiyuan County, Baoding City, Hebei Province, was heading to Xinjiang for work on April 16, 2020. His luggage and cell phone were searched by railway police on the train to Urumqi in Xinjiang. A copy of Zhuan Falun, an MP3 player, and two keepsakes were found in his bag.

The officers handcuffed him and took him to the Urumqi Railway Public Security Division. He was interrogated, and his copy of Zhuan Falun, and MP3 player were confiscated. The officers deleted the practice music, e-books, and WeChat groups on his cell phone. They planned to give him 15-day administrative detention, but released him due to the coronavirus pandemic.

While Mr. Yan waited for the train back to Baoding on June 27, officers again found Falun Gong materials on his cell phone. He was taken to the Railway Police Station, where the officers tried to force him to write a statement agreeing not to be associated with Falun Dafa again.

Wang, Party secretary of the Xinshi District's Century Garden Residential Community, and police officer He Tianyu went to Ms. Pan Xiaorui’s home on June 23, 2020. They demanded that she sign a guarantee statement to stop practicing Falun Gong. She refused.

Xu Yan, deputy director of the Dabancheng District's Yanhu Police Station, and other officers ransacked Ms. Pan’s home the next day when she was not there. They confiscated a computer, MP3 player, Zhuan Falun, handwritten copies of Hong Yin, and experience sharing articles by Falun Dafa practitioners.

The officers coerced her family member to take them to Ms. Pan’s workplace. From there, they took Ms. Pan to the police station for interrogation. She was released the following day, and threatened that she would be summoned at any time.

Officer Xu from the Chengxi Police Station called Ms. Cao Lizhi’s husband numerous times, demanding that his wife go to the police station. They said she simply had to be there to sign her name. Ms. Cao refused to go. Officer Xu then threatened her husband that they would come to Ms. Cao’s workplace to find her.

After several rounds of harassment, Ms. Cao went to the police station. The police threatened her, saying that anyone who refused to be “transformed” would be fired from work and dismissed from the Communist Party and its affiliated organizations if they were a member.

Several Dafa practitioners were reading the Falun Gong teachings together at Ms. Tang Qiongying’s home on the morning of July 4, 2020. Two men broke in and told the practitioners not to move. They called the police. When the police arrived they found that the practitioners had jumped out of the window and left.

The officers ransacked Ms. Tang’s home when she was not there and confiscated Falun Dafa books. Ms. Tang’s sister-in-law’s home was also ransacked, and several MP3 players and music players were confiscated.

The police told the practitioners to surrender and ordered Ms. Tang and her sister-in-law to go to the police station with them.

Officer Cui from the Xinjilin Police Station went to Ms. Li Wenru’s home in early July 2020, harassed her and her husband, and forcibly removed their satellite receiver, which was for receiving NTD TV programs. The couple are in their 80s.

Ms. Jiao Xiulin from Jiansan Farm, No. 93 Bureau, was arrested on June 10, 2020, and detained for 15 days. Her home was ransacked and three copies of Zhuan Falun and a computer were confiscated. Ms. Jiao was not home at the time. Her daughter was so frightened that she couldn't eat for several days.

Mr. Ren Haifei was arrested by officers from the Ganjingzi Street Police Station on the afternoon of June 26, 2020.

He was taken to the Yaojia Detention Center on June 28, but they refused to admit him for health reasons. He was then brought back to the police station.

Mr. Ren was later taken back to the Yaojia Detention Center and is now being held there.

The detention center officials used the coronavirus pandemic to prevent his family from depositing money or delivering clothes or other items for him. Mr. Ren's lawyer has also not been allowed to visit him. Mr. Ren's family has been told that they can only go to the post office to make a deposit for him.

They blocked both entrances to the community, ransacked the homes of Ms. Fu Guixiang, Ms. Zhou Yuhuan, and Ms. Wang Fengying, and confiscated their Falun Dafa books.

The three practitioners were arrested, and are believed to be held in the Yansi Legal Education Base, which is a brainwashing center, in the Dongchangfu District.