(Minghui.org) On October 26, the United States Embassy and Consulates in China published the Chinese version of the “2019 Country Reports on Human Rights Practices: China (Includes Hong Kong, Macau, and Tibet)” on its website. The report detailed human rights violations by the Chinese Communist Party (CCP), calling attention to the CCP's persecution of Falun Gong, including forced organ harvesting from Falun Gong practitioners.

Originally released in English by the U.S. Department of State on March 11, 2020, the Chinese translation of the human rights report helps Chinese citizens better understand U.S. policy with regard to China. 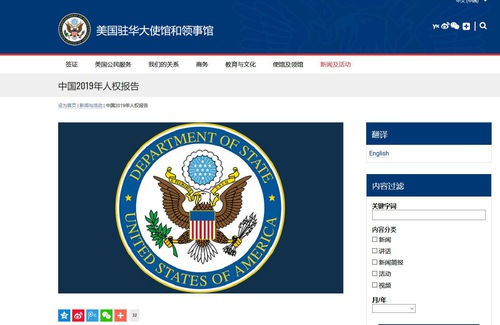 The Chinese version of the 2019 Human Rights Report on China was published on the website of the U.S. Embassy and Consulates in China.

The Executive Summary of the report presents a long list of the CCP's human rights violations. In addition, the CCP’s extensive control of China’s state apparatus is outlined, to explain how much such tyranny operates.

The report also noted other forms of human rights violations, such as censorship of information and blocking of websites deemed threatening to the CCP, prohibition of peaceful assembly, and suppression of freedom of belief.

“Ultimate authority rests with the CCP Central Committee’s 25-member Political Bureau (Politburo) and its seven-member Standing Committee,” explained the report. More specifically, the domestic security agencies include the Ministry of State Security, the Ministry of Public Security, and the People’s Armed Police.

The report also mentions the issue of forced organ harvesting including from Falun Gong practitioners.

As stated in the report, “One Australian National University study of PRC official statistics of organ donations said there was ‘highly compelling evidence’ based on statistical forensics that the data was ‘falsified.' Furthermore, the research paper argued that the government’s organ transplant program involved donations from ‘nonvoluntary donors who are marked down as ‘citizen donors.’”

The report's findings are consistent with the final judgment issued by The Independent Tribunal into Forced Organ Harvesting of Prisoners of Conscience in China, a “‘People’s Tribunal’ created, as others have been, to make a decision about an important issue of public concern not dealt with elsewhere.” This Tribunal conducted an investigation into forced organ harvesting and found “direct and indirect evidence of forced organ harvesting” in China. This was based on “extraordinarily short waiting times” and “massive infrastructure development of facilities and medical personnel for organ transplant operations.”

Moreover, Falun Gong practitioners, such as Bian Lichao and Ma Zhenyu, are often detained beyond legally permissible terms. “Human rights organizations estimated tens of thousands of political prisoners remained incarcerated, most in prisons and some in administrative detention. The government did not grant international humanitarian organizations access to political prisoners.”

The report states that authorities in China also targeted human rights lawyers for representing Falun Gong practitioners and other groups of innocent people.

For example, secret agents in Guangxi Province detained lawyer Qin Yongpei in October 2019 on charges of “inciting subversion of state power.” A formal arrest warrant was issued two months later, and he remained in Nanning No. 1 Detention Center without access to legal representation at year’s end.

That report notes that “Qin had worked on several human rights cases, including those of ‘709’ lawyers and Falun Gong practitioners, assisted many indigent and vulnerable persons, and publicized misconduct by high-level government and CCP officials.”

Before his arrest, Qin had been disbarred in May 2018 after having practiced law since the mid-1990s. Officials did not explain why Qin was arrested.

This has been a common phenomenon in recent years. “The government suspended or revoked the business licenses or legal licenses of some lawyers who took on sensitive cases, such as defending prodemocracy dissidents, house-church activists, Falun Gong practitioners, or government critics,” states the report.

More specifically, authorities used the annual licensing review process administered by the “All China Lawyers Association” to withhold or delay the renewal of professional lawyers’ licenses. One example is Liu Zhengqing from Guangdong Province, who is known for defending activists and Falun Gong practitioners. In January 2019, the Guangdong Department of Justice revoked his license. The department also charged him with “jeopardizing national security” for defending his clients in court.

The 2019 Human Rights Report on China that is on the U.S. Embassy’s website is linked to the annual human reports for the years 2016-2018. The four annual reports have cited many examples of Falun Gong practitioners being persecuted in China for their belief. Almost all of the cases cited are from Minghui.org.

“My 20-Year-Long Cultivation Path while Working on Minghui”