Jilin Woman Recounts Ordeal During 7-Year Imprisonment for Her Faith

(Minghui.org) “It's very difficult to find the words to describe the physical and mental torture that I have suffered in these seven years of arbitrary detention and persecution,” said Ms. Liu Fang.

Ms. Liu, a former employee of the Agricultural Bank of China in Dehui City, Jilin Province, started practicing Falun Gong in March 1999. When the Chinese communist regime started to persecute the mind-body improvement practice four months later in July 1999, she was targeted for not renouncing her faith. Ms. Liu was arrested twice, in 2005 and 2008, and each time was sent to a forced labor camp for a year and a half.

In 2012, Ms. Liu was arrested again and sentenced to seven years in prison. She was released on October 7, 2019, after serving her term.

Below is her personal account of the seven years she endured in prison:

I was walking home on October 8, 2012, when a car drove up and stopped next to me. I was about to bypass it when four people got out and grabbed me. They pushed me into the car, snatched my bag, and searched it.

It was after I was taken to the Dehui City Domestic Security Division that I learned these people were plainclothes police officers.

The officers took me to a room with only a table and a metal chair. They made me sit in the chair and handcuffed me. An officer stayed behind to check the items in my bag while interrogating me. He slapped me in the face when I refused to provide the information he wanted. Another officer took my house keys and ransacked my home. He returned to tally the loot in front of me. All of my Falun Gong books, the portrait of the founder of Falun Gong, DVDs, cell phone, and printers were confiscated.

I was detained in the Dehui City Detention Center that night and went on a hunger strike to protest the persecution. On the fourth day of my hunger strike, I was given an IV and my hand swelled up.

The Dehui City Procuratorate approved my arrest on November 9. To protest the persecution, I went on a hunger strike again and was force-fed.

Once, an officer stepped on my arm, while another held me against the bed and someone else held my legs and pinched my nose to force-feed me.

Another time, several officers held me down while the doctor pinched my nose and stuffed a mental object into my mouth. I almost fainted. After the force-feeding, my whole mouth was full of blisters and some of my teeth were loose.

While I was in the detention center, I was also deprived of sleep. The director of the detention center and the police ordered me to sit on the bed while four officers surrounded me. One of them kept touching my eyes, ears, and nostrils to keep me awake.

I was put on trial on September 25, 2013. The judge didn't let me defend myself and instructed me to answer yes or no to his questions. I was later sentenced to seven years in prison and continued to be detained in Dehui City Detention Center. The intermediate court turned down my appeal.

On November 20, 2013, I was transferred to the No. 3 Detention Center in Changchun City where I was strip-searched.

I was transferred to Jilin Women's Prison on June 13, 2014, and held under strict control in the No. 8 Ward.

Ni Hongxiao, the ward director; a guard; and several inmates forced me to sit on a small stool from 4:50 a.m. to 10:00 p.m. daily without moving. Meanwhile, I was forced to watch videos that slandered Master Li (the founder) and Falun Gong. Apart from being allowed to use the restroom three times a day (morning, noon, and night), I was not allowed to do anything else. 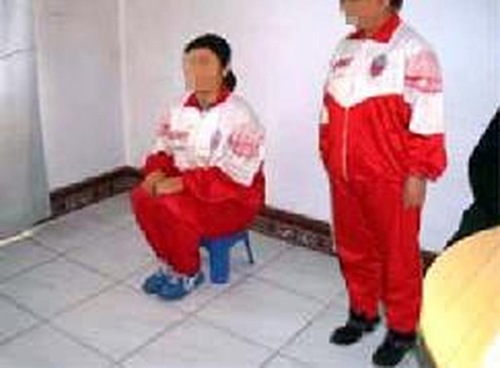 As I refused to watch the videos, the inmates and guards started discussing ways to "transform" me and make me give up my faith in Falun Gong.

They ended up not beating me. Everyone left except for one inmate who stayed behind to watch over me. I was later told to return to my cell.

The inmates also tried to threaten me daily by telling me that they'd be punished if they didn't do what the guards ordered them to do and that I'd see no end to their torture if they were penalized on account of me.

One inmate said, “As long as my sentence can be reduced, I'll do anything, even if I'm told to kill. The prison will try anything to make you "transform." If you die, it will be treated as a natural death.”

The long-term torture caused my entire body to swell; festering sores also developed on my hips due to sitting on the small stool. Not only was I physically in pain I was also suffering mentally from verbal abuse.

To increase the persecution, the inmates monitoring me lied to director Ni that I was doing the Falun Gong exercises. Ni cuffed my hands to the top bunk of a bed with my feet barely touching the ground. I was unable to stand up or squat down. It felt as if my wrists and shoulders were broken. 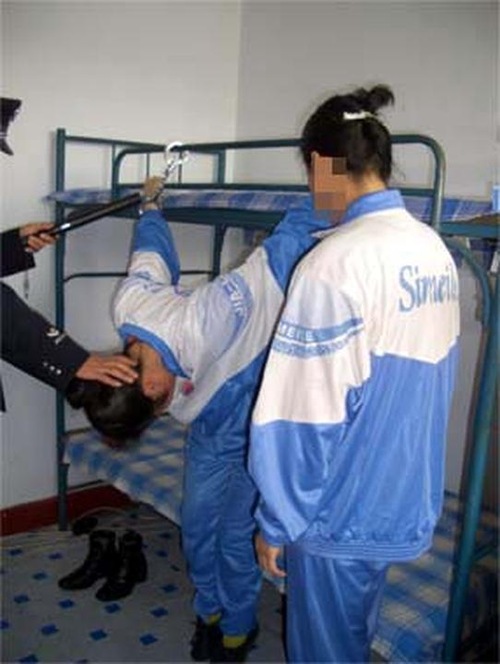 “How about this? Aren't you comfortable? You were asking for it.” They seemed to enjoy watching me suffer.

I wasn't let down for a long time. Then I was handcuffed to the bed again at night for 24 hours.

After that, I was only allowed to use the restroom twice a day. Once I needed to go urgently and asked for permission, but the inmates said I had to wait for the guards to come back to approve my request. In the end, I had to relieve myself in a washbasin.

Later, when a guard came to release me from the handcuffs, she told me the guards were always in their office and denied being away. I don't know who lied to me.

Another time, I told the inmates I wanted to stand for a while. They refused. One of them came over to hold my shoulders while another pushed me down on a bed. They cuffed my hands to the bed frame so that I couldn't stand up or squat down.

On September 27, I was transferred to another room and forced to sit on a small stool during the day and restrained to the bed in a spread- eagle manner during the night. There was a CCTV in the room, which was angled in a way that could only capture things below the waist when I lay in bed, but nothing above my waist. Every night, the inmates would first order me to lie in bed before cuffing my hands to the bed. They would then cover my legs with a blanket before shackling my feet under the cover, so the CCTV didn't capture any of their restraints.

During that time, I was given moldy cake with worms at every meal, together with very salty vegetables and half a cup of water. This was what I ate for half a year.

While put under strict control, I was denied family visits and not allowed to make calls. When my family was finally allowed to visit me, the guards and inmates often warned me that they would listen in on my conversation with my family and that they'd end the visit if I said anything about the torture I suffered.

I was transferred to another cell after the New Year to do forced labor for more than 12 hours a day. I started writing letters to the higher-ups after the guards ignored my pleas to improve the work conditions.

In June, when the prison chief in charge of reform came, I asked her to follow the rules stipulated in the “Labor Law.” She turned around and left, saying she wouldn't talk to me about this.

Shortly after on July 3, 2015, I was taken back to No. 8 Ward and put under strict control again because I asked the prison to observe my legitimate rights. This time, it lasted for three months.

Nearing the end of July, two guards, a male and a female, came with the letters that I wrote previously. They tried to persuade me to give up my belief, telling me I would never win against the communist regime.

I was put under strict control for the third time on August 13, 2018. The inmates placed a bet with the guards that they could "transform" me in a month. To do this, they prohibited me from 1) having family visits, 2) using the phone, 3) buying necessities, 4) washing and taking a shower, and 5) eating vegetables.

I was also forced to sit on a small stool without moving. When I asked to see the guards, the guards told me the inmates did the right thing and said I could become like them if I wrote a guarantee statement.

Festering sores developed on my hips after half a month. The inmates then informed the guards who came with a recorder, and they took a photo of the festering sores.

Because I was not allowed to use the water for a long time, I couldn't wash my bowls or clean myself. The inmates said I smelled and opened the windows to air out the room. However, it was September and extremely cold, so I knew that they wanted to freeze me. They even told me to return the pants that someone lent to me.

I was finally released from prison on October 7, 2019.

Before my release, the prison chief said, “I won't be asking you to write the guarantee statements, but I can tell you that you will definitely be back here again.”

I said, “Don't worry, I definitely won't be back.”

When the car exited the gate, my family stopped the car. My father refused to let the officers take me away and told them they had no right to do this. My younger brother stood in front of the car while my father got into their car through the front passenger seat window before pushing me out from the car. I was able to leave with my brother.

The officers wouldn't let my father leave. During the tussle, one of them injured my father's back (he has yet to recover to this day). They also threatened to arrest my brother if he refused to tale me back. With no choice, my father called for me to return.

My father and I were taken to a police station, where the police threatened me, “Let me ask you one question. Do you still want to practice [Falun Gong]? If you do, I'll arrest you, detain you, and sentence you. If you give up, I'll release you immediately.”

I ignored him, held on to my father, and walked out the door. When the police shouted for someone to prevent us from leaving, my father warned them that he'd take legal action against them. With that, we were able to return home.

Practitioners Tortured for Refusing to Do Hard Labor