(Minghui.org) Jilin Women’s Prison is notorious for torturing Falun Gong practitioners, who for that reason are confined in the eighth prison ward.

Ms. Liu Fang, from Dehui City, was arrested on October 8, 2012, and was illegally sentenced to a seven-year prison term. She was taken to Jilin Women's Prison in December 2013 and held in the eighth ward.

She was held in a solitary confinement cell on the first floor because she refused to watch videos that slandered Falun Gong.

The prison guards tortured her, using methods such as hanging her up with hands tied behind the back, and tying her to a bed. She was forced to sit on a small stool from 4:50 a.m. to 10:00 p.m. daily without moving. At other times she was forced to sit on the floor with legs straight and one hand tied to a bed. One guard sat on her back and pushed her head towards her knees, while another pulled her arm. 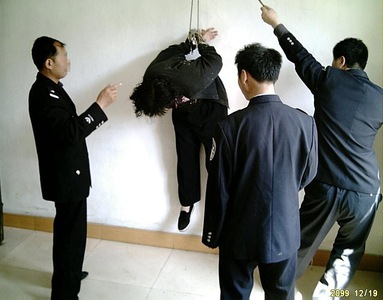 Torture re-enactment: Hanging by hands tied behind the back

Festering sores developed on both of her hips, and her thighs and face became swollen. Her hair turned gray.

Ni Hongxiao, team leader in the eighth ward, was in charge of torturing Ms. Liu.

Practitioner Ms. Guo Wenshuai, from Changchun, was arrested on September 2, 2011, by police from the Jilin Domestic Security Division, and sentenced to seven years in Jilin Women's Prison.

When Ms. Guo heard that a practitioner had been tortured, she protested by holding a hunger strike, which resulted in her being force-fed. Everyone heard her shouting, “Stop the persecution! Falun Gong is good!” The guards put dirty socks in her mouth and closed the cell doors to prevent others from hearing her. But when she was carried back to her cell, everyone heard her shouts of “Falun Gong is good.” 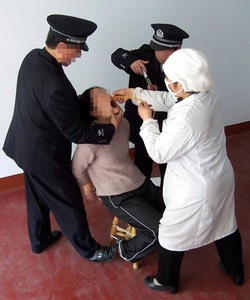 After two other practitioners were tortured in late 2014, Ms. Guo went on another hunger strike for 20 days, and was force fed three times daily.

It has been reported that Ms. Guo was taken to the prison hospital, due to injury from torture.

Ms. Qi Enxiang Is Forced to Sit on a Small Stool

Practitioner Ms. Qi Enxiang from Changchun was arrested on January 13, 2014, by police from the Changchun City Domestic Security Division. She was also sentenced to three years in Jilin Women's Prison.

From the beginning of her sentence she was forced to sit on a small stool from 4:50 a.m. to 9:00 p.m. While sitting on the stool, she was forced to watch extremely loud television programs that slandered Falun Gong.

It was learned that she is suffering from high blood pressure, heart disease, and anemia.

Ms. Chai Yuxiu Forced to Sit on a Small Stool

Ms. Chai Yuxiu, 72, is from Longjing, Yanji City. She was arrested on July 21, 2014, and taken to Jilin Women’s Prison on September 1. She was given a three-year prison term within 40 days of her arrest.

In the prison, she was forced to sit on a small stool from morning until night. Her legs and feet became swollen as a result.

She was transferred to the Changchun Third Detention Center on April 9, by officers from the Dehui Domestic Security Division, including Lou Xingyan and Yang Yanqiu.

A physical exam indicated that she had Hepatitis B, and the detention center refused to accept her. However, Lou Xinyan bribed the political instructor with 10,000 yuan, and she was accepted.

Ms. Zhu began vomiting after three days, and could no longer walk on her own. The detention center called officers from the Domestic Security Division, who took her to the Changchun Forced Labor Hospital on April 14.

The Dehui City Court sentenced Ms. Zhu four months later, to one year of imprisonment. Her family was not notified of the hearing, even though Ms. Zhu was in a coma at the time. About eight police officers carried her on a chair from the first floor to the fourth floor, and a recording was made of the proceedings.

She was then taken from the hospital to the prison on October 14, where she was harassed by inmates. She was forced to sit on a small stool and given injections of unknown drugs.

“Sharing Information About Falun Dafa With Others”