(Minghui.org) The Tian Guo Marching Band was invited to participate in the annual Christmas Parade in West Chester, Pennsylvania on November 30, 2018. The team traveled from New York to perform for the people of West Chester. 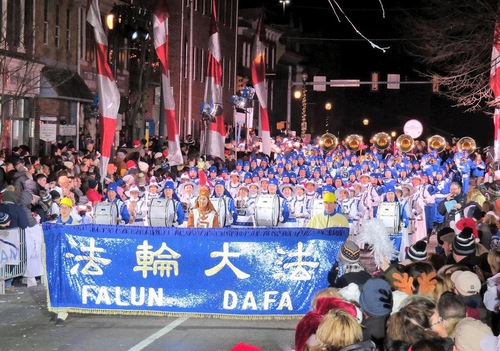 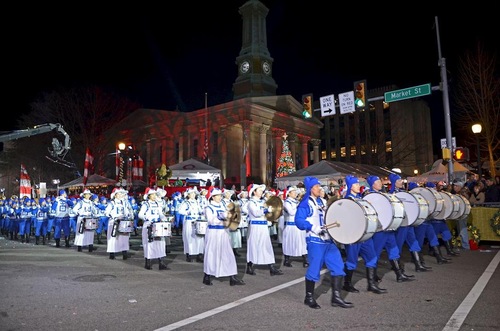 The West Chester Christmas Parade was named one of America's top ten Christmas events in the U.S. to see Santa Claus. Despite the rain, nearly 40,000 people came out to celebrate the holiday season as the parade wound down Market Street.

Amanda and her two daughters said the band's performance was amazing. Amanda added, “I also like their colorful costumes.”

Another parade attendee said that the band's performance was inspiring and full of energy. When he learned that the band traveled from New York, he said he appreciated the Tian Guo Marching Band coming to participate in the local event.

According to the West Chester Chamber of Commerce, the number of parade goers has increased. Although there are less than 20,000 residents, more than 30,000 people attend the parade every year.

This is the second time the Tian Guo Marching Band has participated in this traditional Christmas celebration. In addition to local schools, chambers of commerce, corporate and dance groups, parade participants came from New Jersey, New York, Delaware, and Virginia.

The moderator introduced Falun Dafa to the audience as a practice that promotes physical and mental health, and is suitable for all ages.

Chester County was one of the first three counties established in Pennsylvania. As the county seat of Chester County, West Chester is 336 years old.