Rally in Vienna, Austria: “The Whole World Should Know the Facts of the Persecution”

(Minghui.org) “The whole world should know about the persecution and what is happening in China,” said a passerby to a Falun Gong practitioner at a rally in front of Stephansplatz, in Vienna, Austria on September 19, 2015. The passerby and his wife listened to the speeches at the rally about the Chinese Communist Party’s (CCP) persecution of Falun Gong and supporting the lawsuit against Jiang Zemin, former head of the CCP who initiated the persecution in 1999. 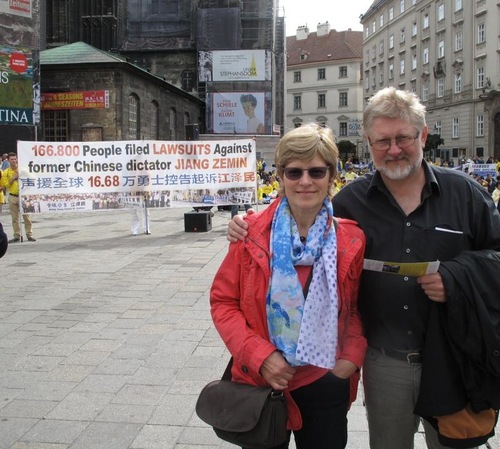 A German couple at the rally venue.

The couple signed the petition opposing the CCP's persecution. The husband, an engineer said, “We know Falun Gong. I think the CCP is terrible, which conducts such a horrible persecution that is more than a crime.”

“I signed the petition in Germany. I wish you success.” said the wife, who agreed with her husband on the issue. 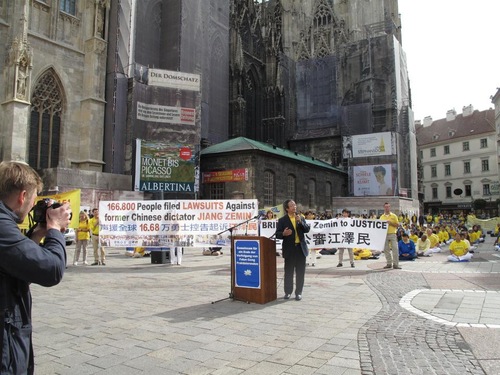 Rally in front of Stephansplatz, in Vienna, Austria on September 19, 2015. 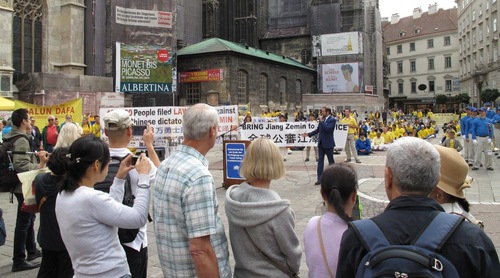 The large banner worded “166,800 People Filed Lawsuits Against Former Chinese Dictator Jiang Zemin” was made by Belgium Falun Gong practitioners. “We made this large banner for activities in front of the Chinese Embassy in Belgium,” said Laurence. “My parents and sister have practiced Falun Gong nearly ten years. When my father heard of the lawsuit against Jiang, he immediately thought of letting the Chinese staff at the embassy know the news.”

“Remembering and Thanking Master During the Mid-Autumn Festival”

“Hong Kong: Practitioners Wish Teacher a Happy Mid-Autumn Festival and Continue Their Efforts to Raise Awareness of the Persecution”