(Minghui.org) Falun Gong practitioners gathered during the weekend of the Mid-Autumn Festival and wished Teacher a happy holiday. They took photos and sang songs to express their respect and gratitude to Teacher.

After the celebration, the practitioners went to different areas to continue their efforts in raising awareness of the persecution.

Tourists Who Know the Facts about Falun Gong Show Support 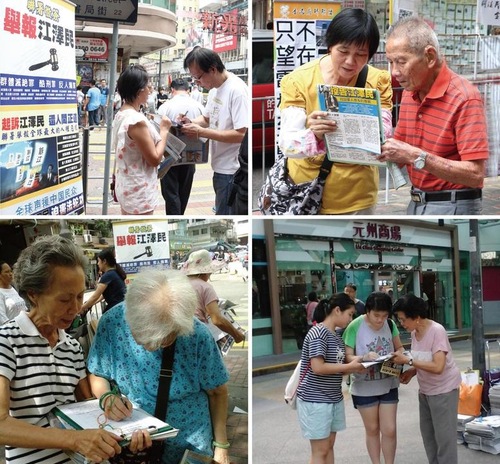 Falun Gong practitioners collected signatures during the holiday from those who support the movement of suing the Chinese dictator Jiang Zemin, who launched the persecution of Falun Gong. 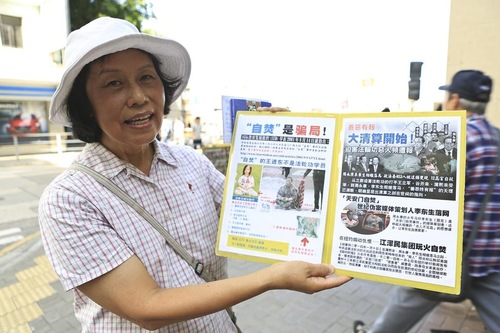 Ms. Tan goes to To Kwa Wan every day, including holidays, to tell tourists from China the facts about the ongoing persecution of Falun Gong in China. She has been doing this since 2000, and is noticing changes in the Chinese tourists after all this time.

Collecting Signatures for the Petition to Support Suing Jiang 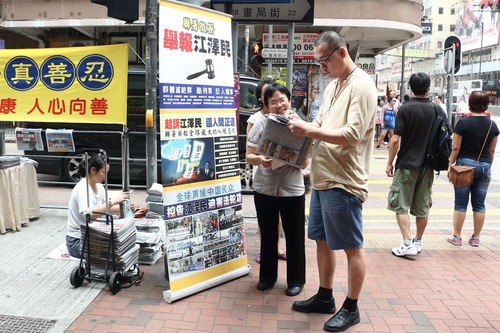 Practitioner Xiaohong always has a smile on her face. She's collected many signatures for the petition supporting lawsuits against Jiang Zemin.

Practitioner Xiaohong has been a practitioner for 14 years. She went to North Point on the holiday to distribute Falun Gong information and collect signatures for the petition. She said that the petition allows people to make a conscientious choice, and “To side with justice and take righteous action after learning the truth about the persecution. Chinese dictator Jiang Zemin started the persecution 16 years ago and millions have died because of it. When people learn the truth, they will make the right choice.”

Xiaohong also feels that Chinese people's attitudes toward Falun Gong have changed a lot. “Many of them now respect the practitioners. They feel that we are amazing for standing up and clarifying the truth voluntarily for so many years.” 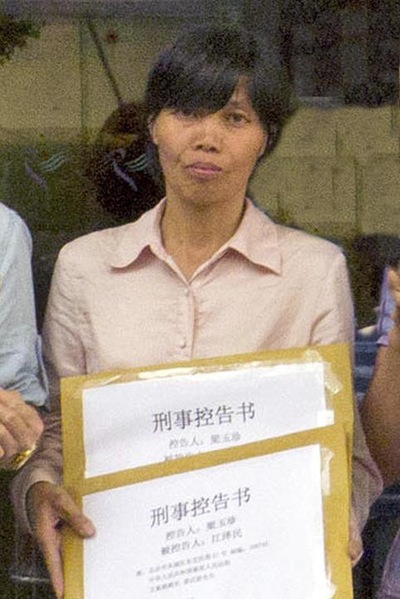 Ms. Liang Yuzhen is suing Jiang for the pain she suffered during the persecution.

Ms. Liang Yuzhen recently moved to Hong Kong after suffering years of persecution in China. She helps distribute Falun Gong information whenever she has time. She mailed in her criminal complaint against Jiang earlier. She said that because of the propaganda created by Jiang and his regime, many Chinese people wouldn't listen to her telling them about the persecution in the past, due to fear, but the situation has improved. “A lady came to me this morning and asked whether I was collecting signatures for the petition to sue Jiang. She signed the petition right away and told me that the persecution of Falun Gong was terribly cruel,” said Ms. Liang. 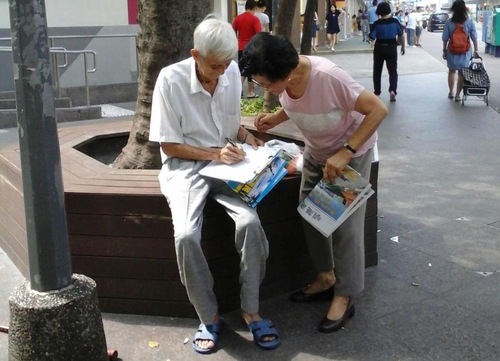 Ms. Feng collects many signatures to support the action of suing Jiang for the persecution.

Ms. Feng went to Lam Tin to collect signatures for the petition supporting lawsuits against Jiang for initiating the persecution. She's been going there for the past dozen years and admitted that it can be hard, especially when it is scorching hot. “I was able to tough it out because I knew that I could make more people understand the facts about Falun Gong and the persecution. I feel happy and rewarded when people know the truth and decide to quit the Chinese Communist Party and its affiliated organizations,” Ms. Feng said.

“Rally in Vienna, Austria: “The Whole World Should Know the Facts of the Persecution””