The complaints are mailed to the Supreme Procuratorate and the Supreme Court in China. Many people in Anqing have offered their support.

About a dozen older practitioners went to the area's four post-offices to mail their complaints. The staff were happy to help mail the forms out.

“I want to mail a complaint against Jiang Zemin,” said the practitioners. “I cannot write. Can you help fill it out for me?” The staff helped without any problems.

“I am too old and cannot write well.” said other practitioners. “Can you please help? My health is so poor as a result of being persecuted.” They then told all that happened to them and the persecution they experienced. The staff were sympathetic and helped these practitioners go through the mailing process quickly.

Two practitioners started a signature drive in Anqing in support of suing Jiang. Fifty-seven people expressed their support and signed the petition within a week. 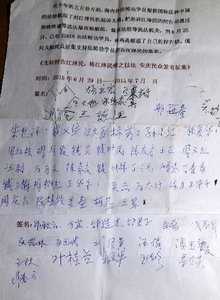 One business owner understood the facts about Falun Gong and the persecution. He signed and also made sure his employees knew about the drive. Thirty-two workers signed the signature drive.

Spreading the News about Suing Jiang

Practitioners put up posters all over Anqing City to let the citizens know that a lot of practitioners who were persecuted are now suing Jiang. Some people immediately started reading the posters when they were put up.

Practitioners took the opportunity to help them understand Falun Gong and to assist them in quitting the Chinese Communist Party (CCP) and its affiliated organizations.