Japan: The Art of Zhen Shan Ren – an Unforgettable Experience

(Minghui.org) The Art of Zhen Shan Ren International Exhibition was held in a public hall next to Shizuoka City Hall in Shizuoka Prefecture, Japan on March 8-13, 2014. Zhen Shan Ren translates as Truthfulness-Compassion-Forbearance, the main principles of Falun Gong.

The 36 artworks presented in the exhibition showcase the beauty of Falun Gong and also depicts the plight of practitioners amidst the ongoing persecution in China. 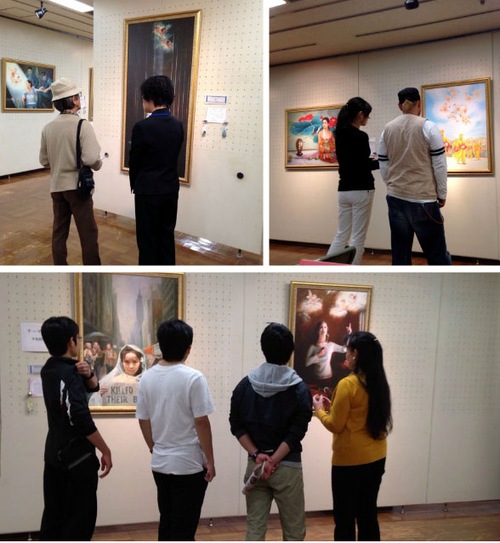 Of the many people who came to see the exhibition, some made special trips to see the show several days in a row to fully appreciate the message of the paintings.

Two paintings “My Son” and “An Orphan's Sorrow,” in particular, touched people's hearts.

The depictions of the grieving and hopeless eyes of a broken mother who just lost her beloved son as a result of the persecution, and the helpless gaze of a young girl whose parents were killed, clearly and effectively conveyed the brutal and shocking message of the crimes committed in the persecution. These two paintings brought tears to visitors' eyes.

Many people found it unbelievable and hard to comprehend that the Chinese Communist Party persecutes and tortures such peaceful people.

An elderly man carefully viewed all the paintings and said that he had never heard about Falun Gong or the persecution that is happening in China. He said he felt fortunate to be able to come to see the exhibition and now understands the evil nature of the Chinese Communist Party.

“I thank the artists for using this realistic art form to vividly and exquisitely display the contrast between good and evil in the world.” He added, “These outstanding pieces cannot be measured by their artistic value alone; they have become the most unforgettable memory in my life.”

“With One Thought It Saved Myself and Others”