(Minghui.org) Despite their best efforts to sabotage Shen Yun Performing Arts' European performances, the Chinese Communist Party (CCP) has ended up instead as de facto promoter. Following its efforts to derail shows in Germany and Belgium, the CCP pressured the Teatre Nacional de Catalunya in Barcelona, Spain to cancel Shen Yun's April 9-12 performances. The theater refused to comply, and the story was reported by Spanish mainstream media.

The media reports instead drew a larger audience, many having heard of Shen Yun because of the CCP's attempted interference. All four shows in Barcelona were sold out.

The traditional Chinese values showcased by Shen Yun resonated with the audience and were highly praised in the media, which cast the whole incident as an instance of the Spanish people standing up for kindness and tradition. 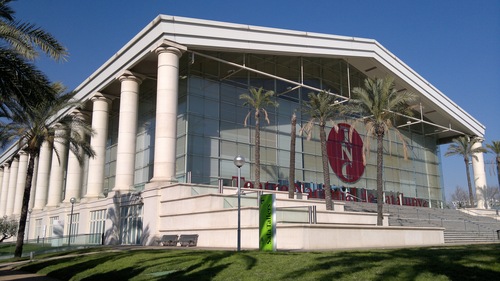 On April 7, two days before Shen Yun’s first performance, the second largest newspaper in Spain, El Mundo (“The World”), published an article entitled “China Attempts to Ban a Production in Spain: Chinese Diplomats Threaten with Trade Interests.” The story exposed the Chinese regime’s attempt to force the theater to cancel Shen Yun, pointing out that the CCP was powerless to stop Shen Yun from bringing the essence of traditional Chinese culture to Barcelona. 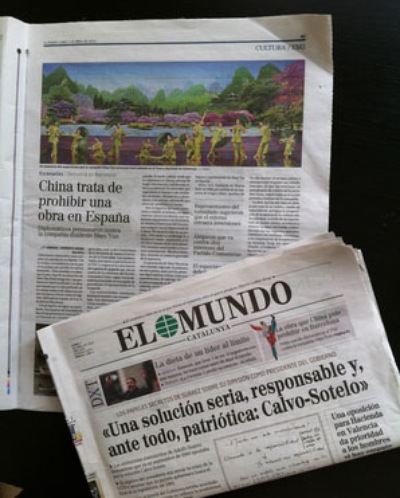 On April 7, El Mundo (“The World”), mainstream newspaper in Spain, published an article exposing the Chinese regime’s attempt to force the theater to cancel Shen Yun in Barcelona.

The article revealed that several Chinese diplomats visited the theater on February 25, 2014, to demand that the Shen Yun shows be canceled. After the theater declined, the Chinese diplomats went to the local cultural authority and foreign affairs agency to exert pressure. However, their efforts failed.

On March 26, the Falun Dafa Association of Spain, the local presenter for Shen Yun, pressed charges in a local court against the Chinese officials who tried to sabotage the performances. The charges include libel.

The organization's legal representative attorney, Carlos Iglesias stated, “These officials have been involved in slandering and insulting Shen Yun artists and its presenter in Spain. Their providing false information to the theater was in violation of the criminal laws of Spain.”

On April 9, the opening day of Shen Yun’s performance, Spain’s national television news network Telecinco covered the event live. Evening news anchor Pedro Piqueras reported, “The Chinese government doesn’t like to be criticized, not even in the way of dance. This time, in spite of their efforts, they didn’t succeed in stopping the performance.”

“The journey to ancient China has begun. Through dance, music, colors, and stage effects, the five thousand years of Chinese civilization is again in front of us,” said field reporter Laila Jimenez.

“A large screen brought us to the Shaolin Temple. Suddenly I am on a prairie in Mongolia. Legends, history, traditions and all the culture that was almost destroyed by Mao Zedong’s Cultural Revolution shines again,” wrote another reporter Susana Ramos in a live report. She continued, “Shen Yun’s artists are finally rewarded after the hard work they have done. Their performance has moved the audiences to tears.”

El Pais (“The Country”) has a daily circulation of 400,000 and is also sold in Latin America. The newspaper used almost a full page to cover Shen Yun’s extravagant performance and the persecution of Falun Gong.

According to El Pais , “The controversy of the New York based Shen Yun Performing Arts after it arrived in Barcelona, did not overshadow the dazzling radiance of the talented dancing artists, musicians, and soloists.

“The performance was flawless. Shen Yun’s performance is hosted by the Falun Dafa Association of Spain and there are two programs in the performance that expose the persecution of Falun Gong practitioners in China.” 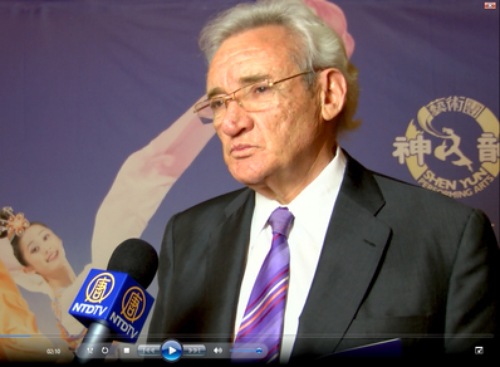 Spain’s iconic radio personality Luis del Olmo had high opinions of the performance: “Having watched many shows, I undoubtedly think this Shen Yun show is the most important one I’ve ever watched in my life. I wholeheartedly congratulate them.

“Don’t miss this show, because it is one in a million... The performers, the orchestra, the tenors, colors, and the backdrop, are images that fill our souls with light and joy,” he added. 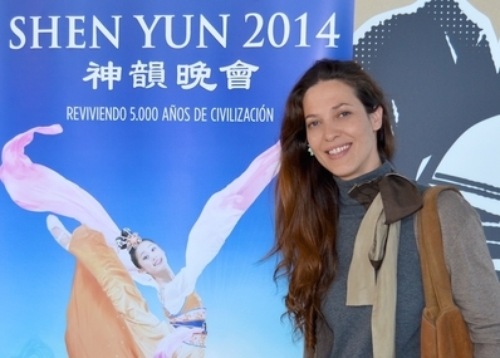 “The show delighted me, it was grandiose. The artists perform magic! One knows when somebody does things from the heart and enjoys doing what they do – this shows in the performance,” Ballerina María Nadal said upon watching Shen Yun on April 12.

“Japan: The Art of Zhen Shan Ren – an Unforgettable Experience”