(Minghui.org) Today's news from China includes incidents of persecution that took place in 7 cities or counties in 4 provinces. According to this report, 2 Falun Gong practitioners were subjected to mistreatment during their detention, and at least 9 practitioners were illegally arrested. 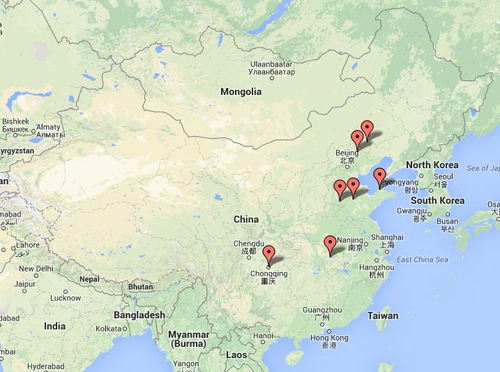 Ms. Yu Minghuan from Fanzhai Village, Fanzhai Township was arrested in mid-October for distributing informational materials about Falun Gong and the persecution. It's believed she is being held in the Liaocheng Detention Center.

3. [Wuhan City, Hubei Province] The Wuhan City No. 1 Detention Center Refuses to Allow Practitioners' Families to Give Them Money and Necessities

Practitioners are often taken to the Wuhan City No. 1 Detention Center. Ms. Xiao Aixiu has been detained here since she was arrested on September 28, 2014. Her family brought clothes and money for her several times, but the guards refused to let the family leave anything.

Ms. Li Fang was also held in the detention center. Her family was not able to send clothes and money to her either.

Ms. Li Guilan was arrested on October 27, 2014, for telling people the facts about Falun Gong. She was released that night because she had symptoms of high blood pressure.

A group of police officers broke into her home and arrested her again on the morning of October 28. The officers ransacked her home and took a computer and informational materials about Falun Gong. Ms. Li was taken to the Nanxinzhuang Police Station and detained. She was interrogated throughout the day.

Ms. You Chaofeng's daughter got a phone call from the Xiaolongkan Police Station in the Shapingba District on October 20, 2014. The officer threatened to arrest her mother over the phone.

Ms. You Chaofeng was arrested the next day when she went out on errands. She was taken to the Shuanglong Police Station and handcuffed. Her wrists were bruised. Ms. You was kept in the police station until about 4 p.m. that afternoon.

Ms. Li Yufen and Ms. Wang Yulan from the Bairin Left Banner were arrested for telling people about Falun Gong on July 13, 2014. The police broke the lock and entered Ms. Wang Yulan's home. Even though no one was home, they conducted a search.

When the police went to Ms. Li's home to search it, Ms. Li's sister, Ms. Li Yumei, and Ms. Hou Guilan, who are both practitioners, were there. The police arrested them as well. Ms. Wang Yulan was taken to a brainwashing center for 21 days.

Ms. Wu Manping went in front of the city government building on October 27, 2014, and held a message board demanding the release of her husband, Mr. Yin Xiangyang. Officers from the Xinjia Police Station arrested her. She was taken to the Yantai Detention Center that day.

Staff from Domestic Security Division recently submitted Ms. Wang Lianying's case to local procuratorate, in an attempt to put her in prison.

Ms. Wang, a retired middle school teacher, was arrested while talking to people about Falun Gong in a food market on the morning of August 25, 2014. Police officers and staff from Domestic Security Division broke into the house by forcing open the window. They searched her home and took her computer, Falun Gong books, and 4,000 yuan cash.

“Nurse Supervisor Arrested for Her Beliefs before APEC Meetings”