On July 20, 1999, millions of people's lives changed. The Communist Party's then-head Jiang Zemin launched the brutal persecution of Falun Gong that day. Practitioners then began to peacefully resist the persecution. Ms. Gao Shunqin, who currently lives in Toronto, Canada, was interviewed and shared her own experience of that tragic time. 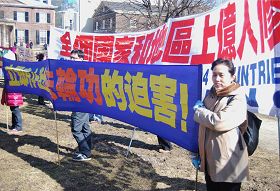 Ms. Gao Shunqin attends a rally in Canada to call for an end to the persecution of Falun Gong

Ms. Gao was born in the 1960s. She used to work in the clothing industry and managed a restaurant in Wuhan. After the persecution started, she was illegally arrested several times, and her store was confiscated. Later on, she started her own housekeeping company near the Hubei Province Government complex. Practitioners who had to leave home to avoid arrest came to work for her.

“An overseas Chinese lady from Singapore hid a large amount of money under her bed. She forgot that she had put it there. Practitioner Xiaohua found the money when she was cleaning her home. She handed the money to the lady, who was very touched. 'You clean everything so well, and you are so hard-working. Where else could I find such a good person as you?'

“Many of our clients said that they would like to hire Falun Gong practitioners, since practitioners are different in a good way. They do their job neatly and fast. The clients trusted them very much and even gave them the keys to their homes. In contrast, the clients would stay home to watch non-practitioners do the job.

“The police station was across the street from us. The officers also wanted to hire Falun Gong practitioners, since they knew that practitioners are the best people. The officer who took me to the brainwashing center teased me after he understood the truth, 'After you are released, I will hire you to help us do the housekeeping.'”

Injected with Poisonous Drug(s), Ms. Gao Was Tortured in the Brainwashing Center

“When personnel from the procuratorate came to interrogate me, I said to them, 'You all know that Falun Gong practitioners are good people. We have not done anything wrong or illegal. But we were tortured. How would you feel if your mother, wife, and sisters were tortured this way?' I also said to the female officers, 'You are also females. It was also to embarrass you when they were embarrassing me.' They were all speechless.

“Many of them knew that they were doing wrong, but out of their desire for power and money, they continued to do evil against their conscience.”

In the middle of March, Ms. Gao was taken to Yangyuan Brainwashing Center in Wuchang. One morning in the middle of April, Wuhan 610 Office head Hu Shaobin told brainwashing center employee Hu Shanping to hold Ms. Gao on a conference table. Then Wang, a female doctor, injected her with an unknown drug. After that, Ms. Gao felt dizzy and had palpitations. She felt horrible. Chen Qiyi, head of the brainwashing center, used handcuffs to hang her by her two hands from the window for 15 to 16 hours until she lost consciousness.

Reactions to the drug got worse and worse as time went on. In June, Ms. Gao was taken to Hewan Detention Center. “In November, my feet felt frozen, and I had a high fever. It hurt so much that I could not fall asleep. Then I was not able to walk due to the serious foot pain. My teeth fell out, and my body swelled up. My mind always went blank. That lasted for three to four months. In 2005 when I was released with heart failure, I had lost my memory and could not recognize my own son.” 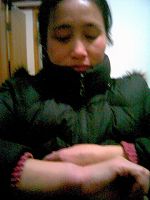 When Ms. Gao Shunqin was released with heart failure, her body was swollen, and she had lost her memory

Injecting Drug(s) Was the Primary Method Used to Kill Practitioners

“When I was detained in the brainwashing center, the doctors used drug(s) that destroyed people's central nervous systems and organs as well as their brains and finally killed them. At first they used drugs that initially made practitioners mentally ill and then killed them within a few days after they were released. Later on, they used a different kind of drug that would kill practitioners months or years after they were released. This way of poisoning practitioners was very hidden. In prisons, labor camps, detention centers, and brainwashing centers, besides the fact that they injected practitioners with poisonous drugs, they also put poison into their water and food.

“Those who were injected with a drug typically became mentally ill and lost their memory. Their bodies were swollen, and their organs stopped working. It became extremely difficult for them to even drink or eat. They lost feeling in their legs, and walking became very difficult for them. Some of them vomited and had blood in their urine and stool. For some practitioners, the two states existed simultaneously. Since the poisoning was chronic, some practitioners died several months later. Many victims of poisoning were detained separately. Thus this tactic was difficult to pinpoint.”

What's worse was that the authorities tried to confuse the practitioners' family members, saying, “You've said that Falun Gong has healing and fitness benefits. How can they be this way now?” They blamed Falun Gong for making them mentally ill. Some also said, “We will make you mentally ill and commit suicide. Then we can just tell the public that Falun Gong makes you crazy.”

The Cases Ms. Gao Has Personal Knowledge of

“From 1999 to 2000, Yu Yimin, a former accountant at Hubei Electricity Company, was injected with poisonous drug(s). He did not feel anything serious at the beginning. Later on, he gradually lost his memory. His feet hurt so much that he lost feeling in them and was not able to walk. In 2003, he became mentally ill and could not take care of himself. In 2011, he passed away.

“When I was taking care of Mr. Yu Yimin, I met Ms. Liu Juhua, a former senior teacher at Chibi School in Huanggang, Hubei Province. She had to leave home to avoid persecution. She shared with us her experience of witnessing practitioners being injected with poisonous drug(s) at Baimalong Forced Labor Camp when she was detained there. Practitioner Li Mei was injected with poisonous drug(s). After that, blood came out of her eyes, ears, nose and mouth. Her whole body shook. It was too tragic to look at. Li Ping was another practitioner. After the injection, she fell down with a scream and did not wake up until several hours later. Liu Juhua was arrested in September 2008 for exposing the fact that the CCP was using drugs to persecute practitioners. Later on, she was incarcerated in Wuhai Women's Prison.

“Ms. Xu Jiamei, in her 70s, was my friend. She lived in Shuiguohu in the Wuchang District. She was detained in Yangyuan Brainwashing Center in May 2005. When her daughter went to visit her, she met head Chen Qiyi. Her daughter's mother-in-law was Chen Qiyi's wet nurse. When her daughter told Chen that her mother was Ms. Xu, Chen exclaimed, 'Oh, no! We mixed drugs in her food!' In August when she was released, Ms. Xu's mind became unclear. She often fell down. Her teeth became loose and fell out. She suffered for three years before she passed away in April 2009.”

Ms. Li Suzhen worked at the Gauze Company in Wuhan. In 2007, she was arrested when she was distributing truth-clarification materials. She was detained at the brainwashing center in the Qiaokou District. Her food was poisoned. After she ate, she started to vomit a bowl of blood. Later on, whenever she tried to eat, she would vomit it out. Around noon on June 8, 2009, her hands and legs started to spasm. Then she vomited black blood and lost consciousness seven times. When she was in critical condition, her family recited “Falun Dafa is good and Truthfulness-Compassion-Forbearance is good” for five hours for her. Then a miracle occurred, and she woke up. In September 2011 a healthy Li Suzhen was arrested again, and no one knows her whereabouts.

In 2005, when Ms. Yu Zhen was detained at the Erdaopeng Brainwashing Center in the Jianghan District, blood came out of her urethra after she drank the water given to her by the guards. Blood flowed down her legs. Someone else mistakenly drank the water the guards gave to Ms. Yu and started to bleed as well.

In 2011, when Gao Shunqin came to Toronto, Canada, she witnessed another middle-aged practitioner from Shandong Province fighting the drug that she was injected with before. She passed away.

“These cases are the ones that I am personally aware of. I know that this is very common in China.”

Evil Will Be Punished

“The evildoers who injected us with drug(s) in Yangyuan Brainwashing Center have been punished one after another. In January 2006, Hu Shanping, who used to hold me on the table to inject me with the drug, became mentally ill. In August, Chen Qiyi, head of the brainwashing center, had brain tumors. Hu Zongshu, who arrested me several times, was killed in a car accident. All these things happened within a year. In the summer of 2008, Yu, Party head of the brainwashing center, got a cerebral hemorrhage.”

Those people who were involved in the persecution of Falun Gong beginning in 1999 played large roles. After what happened to them, others were taken aback.