(Minghui.org) July 20, 1999 is a date when millions of people's lives were changed. Due to personal jealousy, the Communist Party's then-head Jiang Zemin launched a brutal persecution against Falun Gong practitioners, after which, practitioners began to peacefully resist the persecution. Ms. Gao Shunqin, who currently lives in Toronto, Canada, was interviewed and shared her own experience of that tragic history. 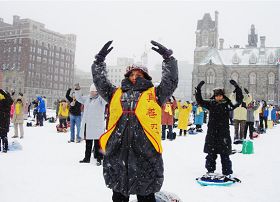 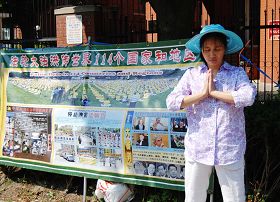 Ms. Gao Shunqin calls for an end to the persecution at the Chinese Consulate in Toronto, Canada

The Storm Began on July 20

Ms. Gao Shunqin was born in the 1960s and had a clothing and food business in Wuhan City. Her store was close to the Hubei Province Government complex.

On July 20, 1999, she went out to do some business. She said, “On the way back, there was a traffic jam. I heard that it was because many people came to petition. I couldn't get to work in my car so I had to walk back to my store. Then I realized that Falun Gong practitioners were sitting quietly there. But I had no idea what it was for.”

“I went to the Hubei Province Government office building and took a look. There were a lot of police officers and police cars guarding the building and no one was allowed to enter. I asked around and realized that assistance center practitioners had been arrested the night before. Everyone came here to report the situation to the government and to request their release, and I didn't hesitate to join the petition.”

“The practitioners were all maintaining order. They quietly stood, or sat on the sidewalk or in the nearby city park waiting for the government officials to resolve the issue. During the traffic peak hours in the late afternoon, the police stopped the buses and told the passengers to get out and walk. Because the military vehicles were parked in the middle of the road, they were blocking traffic. They began announcing over the loudspeakers that Falun Gong's illegal assemblies were blocking the traffic and practitioners must leave. However, because we didn't get any answers, no one was willing to leave. The armed police forcibly placed the practitioners on the buses that they had stopped and took them to the suburbs. By 2 a.m., I was the only practitioner left. The armed police also attempted to take me away, but I told them that I would not go with them and I lived nearby. Then I returned home.”

At that time, Ms. Gao had practiced Falun Gong for less than a year. When she recalled her life before practicing and how she had benefited from practicing, her heart was full of gratitude.

Ms. Gao Reborn After Obtaining the Fa; Her Husband Becomes a Good Person

With her marriage collapsing and suffering from various diseases, Ms. Gao Shunqin was both physically and mentally exhausted and desperate by the summer of 1998. She forced herself to become energetic and took her son for a trip to Beijing during his school summer break. At her relatives' recommendation, she started to practice Falun Gong.

“I used to be very weak. The bones all over my body were in long-term pain. Even in the hot summer, I dared not turn on electric fans or stay in air-conditioned rooms. The hospital could not find the cause. Within less than six months of practicing Falun Gong, all my pains and diseases were gone. How wonderful it is to be free of disease!”

By that time, corruption and collusion between business and the government was already a wide-spread and common practice in mainland China. Although Ms. Gao was an upright person, she couldn't avoid giving gifts or kickbacks in order to do her bulk procurement business. After she started cultivation, she understood the principle of not using improper means and obtaining ill-gotten gains. Thus, she refused to commit any wrongdoing even if she couldn't make a deal or lost business.

Her husband, who was also a businessman, had an affair. She said, “I was really suffering. Our son was still little. I planned to divorce my husband after my son grew up a little. My heart was filled with hatred for my husband.” However, Dafa opened her heart and her hatred was dissolved by compassion. When conflicts arose, based on the requirements of Dafa she examined herself to see how she had caused it. She looked at things from her husband's perspective and placed his needs first. “My husband was really touched by the changes he saw taking place in me. Although he didn't step into cultivation, he could feel the wonderfulness of Dafa.”

Ms. Gao told her husband about Dafa's pure insight on marriage and how cultivators strive to eliminate the attachment to lust. He understood and became self-restraining. Their relationship and marriage kept getting better and better, and their son thrived. The nearly broken family was fixed and became warm and harmonious.

During the darkest time of the persecution of Falun Dafa, Ms. Gao's husband was always by her side and supported her no matter how badly she was persecuted or how their family was harassed by the police. He never left Ms. Gao, and he kept telling people that there was nothing wrong with Falun Dafa because it taught people to be good, and that his wife became a much better person after practicing cultivation. Every time Ms. Gao was arrested, he went to reason with the police without fear and demanded her release.

“At that time, I only had the pure thought that I needed to go to Beijing and appeal for Falun Dafa when it was being slandered, and I didn't even think about my own safety.” Ms. Gao took a train to Beijing the next day. She said, “The entire time I was on the train, there were broadcasts that slandered Dafa. Police and plainclothes police were everywhere. China was filled with the red terror. I walked calmly through them, got off the train, and went directly to a practitioner's home. At that time, many practitioners were traveling to Beijing to appeal and they came from different areas in China. Plainclothes police were everywhere on the street. They would stop anyone who was not a Beijing resident and search their body and pockets. Anyone who possessed a Dafa book would be arrested.”

The Beijing practitioner's home was being monitored 24 hours a day. Even when they went out for grocery shopping they were followed. Ms. Gao did not find an opportunity to get away and go to Zhongnanhai to appeal. So she had to come back to Wuhan in September.

Afterward, Ms. Gao went to do the exercises at the practice site every day. But she was arrested and detained for 15 days in November with the charge of “disturbing the social order”. Her husband demanded that the police release her, and told them, “There are so many corrupt officials and bad guys out there. You don't go after those people, but instead arrest these good people who practice truthfulness, compassion, and forbearance. The country is going to collapse!”

Ms. Gao said, “After I got out of there, I thought that doing the exercises was not disturbing the social order at all. By following the principles of Dafa we were becoming better people. Our health and physical condition had improved. Our families became harmonious. Cultivating in Falun Dafa did no harm but benefited everyone, every family, and thus the whole society. It's such a wonderful practice. But we were not allowed to practice it. If it is considered wrong to be a good person, then is there any justice left in this world? I knew I needed to appeal for my right to practice cultivation freely.”

Ms. Gao went to Beijing again. “Immediately after I arrived at Tiananmen Square, an armed police officer came to ask me where I came from and what I was doing in Beijing. I told him that I came from Wuhan and Falun Dafa is great. He called up a plainclothes police officer who came from Hubei Province to stop people from appealing. I was taken to the Tiananmen Police Station and detained for eight days. Later they sent me back to Wuhan and detained me for another month. In September 2000, when I went to Beijing again, I was arrested again.”

Because she appealed and would not give up cultivating in Dafa, Ms. Gao was detained in detention centers, forced labor camps, and brainwashing centers more than ten times. She was abused and subjected to physical torture and toxic drugs.

“The public did not support the persecution. I had been doing business for many years near the Hubei Province Government. Everyone knew that I was a good person and they all condemned the police who came to our home and harassed us,” said Ms. Gao.

“By Doing Good We Benefit Ourselves ”