(Minghui.org) Since June 10, the Chinese Communist Party (CCP) has been using the “Hong Kong Youth Care Association” to harass Falun Gong information sites in Hong Kong. In August, the situation got worse. The association members hang banners slandering Falun Gong, obscuring Falun Gong banners and interfering with mainland tourists' learning the facts. They've even colluded with some police officers, pressuring them not to respond appropriately to the harassment but to instead arrest Falun Gong practitioners.

The day after was it was established, the Hong Kong Care Association followed orders from the CCP Political and Legal Committee and 610 Office to display banners and poster boards slandering Falun Gong in Hong Kong. This is violates the laws in Hong Kong. The association recruits members of criminal organizations and coerces Hong Kong police officers to commit wrongdoing.

Based on the laws in Hong Kong, individuals and non-profit organizations use public spaces on a “first come first serve” basis. Other organizations need to apply for permission to use a given public space. The Hong Kong Care Association, which did not file an application, disrupted practitioners’ information sites that have been maintained for ten years. Although what they are doing is illegal, due to the Association’s connection with the CCP and and the connivance of the Hong Kong government, the police did not step in in time.

2. The interference escalates due to police connivance

At around 9:00 a.m. on July 9, three members of the Care Association dressed in green uniforms went to the Ka Wai Chuen Hung Hom information site and hung about a dozen banners on both sides of the road, occupying the space where Falun Gong banners usually were. The practitioners had to hang their banners in other locations.

Practitioner Ms. Tao said, “Many mainland tour groups go shopping on Yumin Street in this area. We have been here to explain the facts to mainland tourists for more than ten years. It was the first time we ever encountered such interference. Because we practitioners are always pleasant, the staff of the nearby shops, caretakers, and neighbors are very supportive. They disliked how the Care Association members behaved, complained to police that their business was being interrupted, and asked the police to drive them away.” 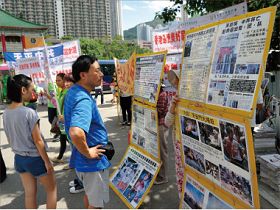 At 7 p.m. on August 3, Association members went to Tung Chung Metro Station and hung banners slandering Falun Gong at the Falun Gong information site. The practitioners saw and stopped them. The next morning, the Association dispatched many more members, who pushed their way in and hung lots of banners slandering Falun Gong and covered the Falun Gong banners. According to a practitioner who was there, they called the police and complained. But the officer ignored them and said the police had no authority to tell the Association members not hang their banners. A police officer even claimed, "If they cover your banners, you can just cover theirs.” A practitioner pointed out that this would just stir up conflict and asked the police to stop the wrongdoers

On Saturday, August 4, dozens of members of the Association disturbed the Wong Tai Sin information site by hanging a lot of banners slandering Falun Gong and placing high volume speakers close to the practitioners. The practitioners were unmoved and continued to explain the facts to the visitors and hand out leaflets. 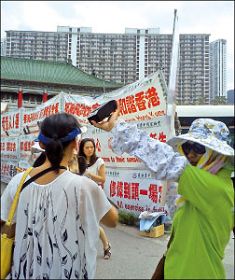 Ms. Cheng Lan-sing of the Wong Tai Sin information site said they have been explaining the facts for more than ten years at that location. Local people and tourists know them well. At 6:30 a.m. on July 9, they went to Wong Tai Sin to tell visitors about Falun Gong and noticed that a lot of banners slandering Falun Gong were hung on the fence at the entrance of the parking lot. Ms. Cheng asked who was responsible. The other side said they did not know. Ms. Cheng said that Falun Gong truth-clarification activities had been going for long time and asked the other side to give them some space, but the other side began to curse at her.

Seeing that the other side was unreasonable, Ms. Cheng called the police. The officer who took the call did not want to do anything, but Ms. Cheng insisted that the police mediate the dispute. At last a police officer arrived but said he just wanted to see what was going on. He called the parking lot manager to the site and asked both sides not to hang banners, distribute leaflets, or set up anything else. Lam Kwok, the vice chairman of the Care Association who had directed the recent incidents, claimed that, as long as the Falun Gong practitioners did not put up banners, they would not either. Ms. Cheng condemned these people's effort to interrupt Falun Gong's truth-clarification activities. She said, "They want to stir up trouble to undermine the information sites and prevent Falun Gong practitioners from publicizing the facts of the persecution."

Ms. Cheng said that, no matter what happens, she and other practitioners with the information site will not be affected but continue to do what should be done. She said, "Falun Gong teaches people to be kind. But Falun Gong practitioners in China are still subject to persecution or forced organ harvesting. Because the CCP suppresses information, many people do not know the truth. So we want more people to know the facts about Falun Gong and the persecution and appeal to their conscience.”

Shopkeepers file complaint against the wrongdoers

Besides hanging slanderous banners, Association members also played their recorders very loud. They even intentionally stood in front of practitioners holding banners to prevent tourists from reading the facts. Their disturbing behavior aroused the indignation of the locals. Many filed complaints with the police about the noisy interference. The members stopped playing their recorders after the police intervened.

Mr. Guo, a local resident, said that practitioners were peaceful and he admired their courage and persistence. He was indignant at the Care Association’s interference: “This must be masterminded by the CCP.” He filed a complaint with the police. He said in reference to police response that the Association had big fund and lots of resources and that only orders from their superiors could make the police take action. 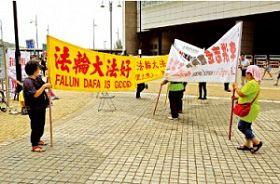 A lady asked for several copies of the Epoch Times and shouted several times “Falun Dafa is good” to express her support. Security guards on site were also unhappy with the members of the Association.

Regarding the Care Association’s harassment of Falun Gong practitioners in their efforts to make the facts of the persecution known, several legislators expressed concern and called for resistance to the CCP.

Hong Kong Legislative Council member Leung Yiu-chung stressed that Falun Gong practitioners have peacefully protested the persecution for 13 years and that their efforts had won public support and recognition. He said, "Our Falun Gong friends have upheld their belief for so many years. I think this should be respected, because it is important for each person to be able to express his opinion in a peaceful way."

Legislative Councillor Albert Chan said that, since the transfer of sovereignty of Hong Kong to China 15 years ago, the CCP has continued to suppress freedom of speech and religious freedom in Hong Kong using increasingly worse and more despicable means and that the police have become more and more biased in favor of the pro-communist camp. He thought that this round suppression of Falun Gong in Hong Kong was masterminded by the CCP’s Political and Legal Committee. He said, "At least in these activities against Falun Gong, you see the obvious use of special means and measures. The possibility of special funding from the stability maintenance fund in the mainland cannot be ruled out, because so there are so many people with so many banners and strong organization."

When Democratic District Director Chow Wai-tung learned about the issue, he said that the recent assaults in Hung Hom and Lok Ma Chau were not unpremeditated, that they were directed behind the scenes by the Political and Legal Committee. He and Falun Gong practitioners jointly condemned what has been taking place. Mr. Chow said, “One can see clearly how Chinese Communists are operating in the persecution of Falun Gong. We all know that recently in the mainland, Political and Legal Committee secretary Zhou Yongkang and his faction are on shaky ground, so they are struggling to maintain power and are extending the persecution to Hong Kong."