(Minghui.org) Chinese Communist Party's (CCP) Central Political and Legal Committee head Zhou Yongkang and others have extended the persecution of Falun Gong into Hong Kong, by initiating a series of attacks on Falun Gong practitioners' truth clarification information sites. It has been nearly 4 months since the harassment and attacks began in early June. Many citizens are criticizing the assailants' malicious interference with Falun Gong practitioners, and are standing up for the practitioners.

The Hong Kong Youth Care Association, instigated by CCP agents, first committed a series of evil deeds at an information site in Lok Ma Chau, which borders mainland China. They intimidated Falun Gong practitioners with knives, slandered Falun Gong and its founder, and wrongfully reported practitioners to police. After that, they proceeded to attack another information site in Wong Tai Sin.

Since August, the attacks have intensified. Members of the Youth Care Association hung slanderous banners at a Falun Gong information site near Tung Chung MRT around 7:00 p.m. on August 3. Practitioners discovered what they were doing and stopped them. However, those members came in even larger numbers early the next morning, bringing a lot of slanderous banners and forcibly covered Falun Gong practitioners' truth clarification banners.

Because of Falun Gong practitioners' truth clarification efforts at tourists spots in Hong Kong over the years, many police officers and local residents have become aware of the true situation. The police stop those people right away as they attempt to block the practitioners' banners.

Local people strongly criticize the assailants' disruption, and some passersby challenge their behavior, saying, “How come you do such things in Hong Kong?”

A tourist from Guangzhou saw the thugs deliberately blocking banners Falun Gong practitioners held at Lok Ma Chau Station on September 24. He couldn't bear it and chastised them, “How come you bring the CCP's approach of persecuting people to Hong Kong? It's incredible that the CCP's dark hand has also being extended to a free region. I just want to see Falun Gong's banners, you have no right to block me.” The thugs ferociously yelled at the tourist. The tourist was so angry that he complained to the police officers present, and asked the police to deal with them.

Many tour guides from China who have learned the truth always told tourists that they can take Falun Gong informational materials as they like. Many of these tourists told the members of the Youth Care Association, “I just love to read Falun Gong materials, it's none of your business.”

Security guards present are also dissatisfied with and despise the disruption by these people from the association, because they have to maintain order under the scorching sun.

Staff of the nearby shops, building attendants and neighbors at the information site in Ka Wai Chuen, Hung Hom, are very supportive of Falun Gong practitioners, because practitioners are always kind to them. These Falun Gong supporters are deeply offended by the thugs' behavior, and complained to the police that the their loudspeaker generates excessive noise, interfering with their daily business operations. They also asked why the police don't drive them away.

According to Falun Gong practitioner Madam Liang at the information site in Tung Chung, members of the Youth Care Association broadcast slandering recordings with a loudspeaker in the quiet Tung Chung area. They also deliberately stood in front of Falun Gong practitioners who held banners to prevent local people and tourists from seeing the messages on the banners. They often intimidated tourists into not taking Falun Gong informational materials. They even grabbed the material from people's hands and threw it on the ground.

The disruption provoked dissatisfaction of citizens living nearby, and many people complained to the police of the nuisance. With the police's intervention, the youths turned off their loudspeaker. But after the police left, they continued interfering by standing very close to the practitioners while holding high-volume loudspeakers. The practitioners remained peaceful and calm, and continued speaking with tourists and passing out flyers.

Citizen Mr. Guo said that Falun Gong practitioners have been raising awareness about the persecution in a peaceful, rational manner. He admires the practitioners for their courage and perseverance. He was angry at the disruption by the Youth Care Association over these months. “It is definitely done by the Communist Party,” he said. He also complained to the police, and he cited the police's reply that this association has a lot of resources. They claimed that they did things following the instructions from their higher-ups.

People from the community asked the Hong Kong government to ban the association. The management company of the Wong Tai Sin Parking Lot, one of the sites where the CCP agents make trouble, took the lead in dispatching people to remove the illegal banners hung in the parking lot on the evening of August 22.

At 6:00 p.m, Jin Wei Parking Lot Company in Wong Tai Sin sent about eight officers to the scene. They removed banners slandering and attacking Falun Gong that covered the barbed wire on the periphery of the parking lot, and replaced them with a notice from the parking lot company.

The notice read, “According to the government's order, no banners, signs or display boards are allowed to be hung and posted [here]. Offending banners will be immediately removed and destroyed.” It was reported that the parking lot company boss told the police to file a case, saying that the government requires the removal of the banners. They hope the police will send officers to guard the area at the time.

When the Youth Care Association found that their illegal banners were removed on the periphery of the parking lot the next day, they hurriedly deployed additional manpower to the scene. But many young people who were temporarily recruited showed less interest. Some of them started making phone calls, and were unwilling to cooperate. Their leader ordered them to unfurl more illegal banners in the afternoon, but couldn't get it done in the end. 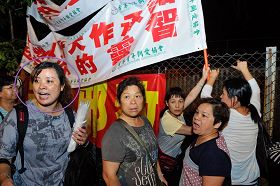 Members of the Youth Care Association hang slanderous banners against Falun Gong. The female leader (1st at front left) is yelling at practitioners. A Falun Gong practitioner from Shenzhen identifies this woman to be a criminal from China. She was held in the Nanshan Detention Center in Shenzhen in 2000 for assault. She often beat inmates instigated by guards. The practitioner was held in the same detention center at the time for appealing for Falun Gong.

Several legislative councilors strongly condemned the CCP for transporting a “Cultural Revolution-like political campaign” to Hong Kong. They warned the Hong Kong government not to be accomplices and called upon citizens to safeguard Hong Kong's basic human rights and core values.

Legislative councilor Leung Yiu-chung (梁耀忠) showed great concern, and he said he will write to the Commissioner of Police to complain. He is worried that the current situation is just like the reappearance of Cultural Revolution type activity in Hong Kong: denouncing and criticizing with posters, and rioting. Such a society as a whole isn't like a society at all. All social tranquility is threatened.

He stressed that Falun Gong practitioners have remained steadfast in their belief over many years, and should be respected because it is very important that everyone expresses oneself in a peaceful manner.

Legislative Council member Albert Chan Wai-yip (陈伟业) said that the suppression of Falun Gong this time in Hong Kong suggests that the Political and Legal Committee of the CCP is behind it. They hired so many people, made so many banners, and took some obviously special measures to target Falun Gong, so it it is likely that special financing is backing it up behind the scenes. He pointed out that the police more and more are favoring the pro-communist group. The CCP's measures to oppress freedom of speech and freedom of religion in Hong Kong have become more despicable, since Hong Kong's sovereignty was transferred 15 years ago, he concluded.

“Saved from Fire after Learning the Truth about Falun Gong ”