Minister of Public Safety of Canada: CCTV4 Should Be Monitored (Photo)

In a letter to Falun Gong practitioner on February 28, 2007, Mr. Stockwell Day, M.P, the Minister of Public Safety of Canada said: "CCTV4 is licensed by CRTC and there should be a requirement for Rogers to monitor further programming." 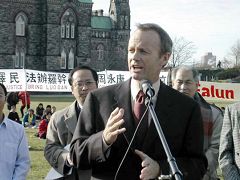 Mr. Stockwell Day is giving a speech at a rally supporting Falun Gong.

In the letter to Falun Gong practitioner Zhang Xiaoheng, the Minister of Public Safety said: "As you point out, the CRTC has itself made record of its opinion that comments on CCTV4 in the past regarding Falun Gong has been 'abusive' and has tended to 'expose that group to hatred and contempt'."

"There are of course limits to the responsibility of government vis-a-vis broadcasting rights. But I do see merit in your suggestion." "CCTV4 is licensed by CRTC and there should be a requirement for Rogers to monitor further programming as you say was done in the case of Al Jazeera."

At a rally on Parliament Hill requesting the government to overturn the CRTC decision to allow the CCTV broadcasts in Canada, Mr. Brian McAdam, a former diplomat, pointed out: "The Chinese Communist Party (CCP) - responsible for the deaths of more people than Hitler or Stalin combined: an estimated 47-75 million people and carries out human rights abuses such as forced abortions, religious and political repression, selling prisoner's organs, mass executions,  torture, and genocide - was given permission last month by the Canadian Radio and Television Committee (CRTC) to broadcast nine TV channels into Canada - it says: "to inform, enlighten, and entertain its audience."

"The fundamental news source for these nine channels is the Xinhua News Agency, dubbed 'Xinhua: The World's biggest propaganda agency' by Reporters Without Borders.  A report released by RSF exposes the CCP-controlled Xinhua News' distortion of facts, hatred for the enemies of the CCP - particularly the United States and Japan - and its support, through the treatment of international news, for the world's worst regimes."

The former editor of the People's Daily said in his article Turning everybody into a Censor "Based on my own experience and stories I witnessed and heard for 22 years working for the Chinese Communist Party, as well as my 45 years of living in China, I have come to one conclusion: there is no evil the Communist Party of China is not capable of. The limit is only in our imagination." He said that the Communist Party controls the media through controlling everybody. It controls everybody physically, spiritually, materially and mentally.

Mr. Brian McAdam pointed out: "China's application to broadcast nine TV channels into Canada should never be thought of as a normal cultural and educational addition to the Canadian mosaic.  It is a ploy by a cunning, murderous regime to expand its global influence."

"In an Orwellian fashion, the CCP uses 'culture' to deceive and distort and manipulate. In their own words: 'culture is a 'soft' component of our nation's power...Compared with economic diplomacy and political diplomacy, cultural diplomacy is able to have our target audience unknowingly accept [our propaganda]. Such cultural infiltration through subtle influence cannot be underestimated'."

"Stirling Seagrave in his book Lords of the Rim details the invisible empire of the overseas Chinese, a vast highly interconnected net of 60 million expatriate Chinese, with assets of up to $2 trillion, who not only dominate the Pacific Rim, but are making inroads into the West as well."

In his book The Coming decline of the Chinese Empire, Victor E Louis said: "The overseas Chinese 'are a powerful instrument of Beijing...and Beijing uses that instrument very flexibly: from financing and setting up anti-government insurgent groups to conducting ...propaganda among the population'." "China is re-linking itself with the overseas Chinese as never before."

Mr. Brian McAdam pointed out: "As a propaganda organ of the CCP, the broadcasting of the Great Wall channels would be an attempt to:

The CRTC made a monstrous mistake that the Conservative Party caucus must correct by over-ruling their decision.

"The core mandate of CRTC is to ensure that what is broadcast in Canada reflects Canadian identity, attitudes and opinions." Mr. Brian McAdam pointed out, "Has the spread of hatred now become a Canadian value?   The Communist regime in China personifies evil and is a threat to the world."

"Many Western countries knowingly co-operated with another master of propaganda - the Nazi government - during the 1930s and 1940s while Jews were sent to concentration camps." "The post-Holocaust world said: 'Never again,' but history is repeating itself as members of religious faiths and spiritual groups, and advocates of democracy are incarcerated, tortured and murdered in China. Meanwhile the CRTC decided to enable the CCP propaganda to reach Canada"

Mr. Brian McAdam said: "The caucus must reverse the decision. We have, however, a brief opportunity to prevent this propaganda effort within our borders.  The CRTC made a monstrous mistake that the Conservative Party caucus must correct by over-ruling their decision."