(Clearwisdom.net) The NTDTV Chinese New Year Spectacular received long-lasting applause from the nearly seven thousand in attendance at the show's two performances. The profound meaning of authentic traditional Chinese culture is cultivation. Dance performances such as "To the Rightful Place," and "Candlelight Vigil" and singing "Finding Truth" displayed to the audience the persecution of Falun Gong happening in China, and manifested practitioners' views on today's world and cherishing life.

What do Western and Chinese audiences think of the programs? Here are highlights of some interviews conducted after the Chicago show:

A professor from UIC (University of Illinois, Chicago) and his Chinese wife Ms. Chen both had an interview with the reporter. Ms. Chen said that they had much knowledge about the CCP's persecution of Falun Gong, and they had even heard of Falun Gong practitioners having their organs harvested and sold at high price. She appreciated and admired the show for putting on a program exposing the CCP's persecution of Falun Gong. She liked the program very much. Ms. Chen added that she loved watching dancing since she was young. As soon as the dance performances "A Dunhuang Dream" and "To the Rightful Place" began, a voice in her mind reminded her to pay close attention. The dances left deep a impression on her. She felt they were the best performances she has ever watched since childhood, refreshing and touching. Before the couple left they said they would definitely bring their children to come next year when their children's ages meet the requirement, because the performance is the most authentic display of traditional Chinese culture.

Chicago resident Mr. Steve said, when being asked if he could understand the implied meaning of dance performances, that he could completely understand. He liked the program "A Dunhuang Dream" and the dance performance depicting the CCP's persecution of Falun Gong practitioners ("To the Rightful Place"). The dance showed a woman Falun Gong practitioner brutally beaten and faint on the ground, a heavenly deity land on the earth and escort her to heaven, where the scene is really beautiful. 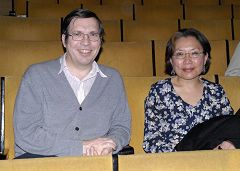 Pharmaceutist Su Meizhen and her husband Jerry Lasky came to watch the show for the first time. A friend had told them about it. Mr. Lasky learned about the persecution of Falun Gong through the programs and he showed great sympathy. He said there is no freedom of speech in China, while in the Western society, it is very significant to raise awareness of the true situation of the persecution to the public in the form of arts.

Su Meizhen had learned about CCP interference in the show in the Chicago Sun-Times. She said, "It's inconceivable. On the soil of the United States, it is ridiculous that they could do such a foolish thing. Why is the CCP afraid of "Truthfulness-Compassion-Forbearance"? People should have their right to belief."

Ms. Emmie said that the show was a brainstorm for her. She learned a lot, such as divine-inspired culture, the truth on Tiananmen Square, the principle of "Reaping What is Sown," and the truth about the persecution of Falun Dafa. She appreciated having the problems expressed in such a way, thinking the show was very good, and very special. 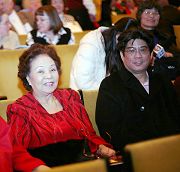 Ms. Sukit from Thailand is a paramedic. She liked dance performance "A Dunhuang Dream" very much. She said that the show reminded her of her ethical culture. Asian cultures have something in common. When talking about the program "To the Rightful Place," Ms. Sukit said that though people have different beliefs, beliefs can help people know the principle of "reaping what is sown." There are too much injustice in today's society. Heaven's punishment to bad people should be quick, so as to stop the bad people from doing evil. 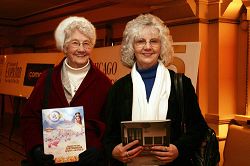 Joyce and her daughter Dotty

Joyce and her daughter from Kansas watched the show together. Joyce said the show was very good. She liked the program "Candlelight Vigil." Joyce said while her eyes were red, that while watching the dance performance, she kept shedding tears. People should pay attention to the persecution of Falun Gong happening in China, and only when more people have learned about the truth, will the persecution of the innocent people be stopped. 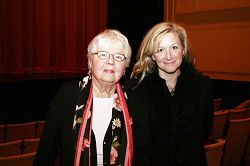 Maie and her mother come together to watch the show

Maie is a business person dealing with product development. When talking about the program about the persecution of Falun Gong in China, she said that the stage should often express subjects in real life, so that people can learn what is kind, what is evil, and help Westerners learn more about what is happening in China. Evil should not be hidden.

“Ms. Xu Jiling Suffered a Mental Collapse Due to Torture”